Oregon St. head coach Mike Riley will tell you its just a case of shifting from putting in all manner of plays and formations and options and packages to game planning for a specific opponent. It just might be a case of deciding its time to switch to "brutal" football, though, as the Beavers clearly pared down the playbook, and some of the rotations, with just over a week left to prepare for the season opener on Aug. 30 against Portland St.

Primarily because of the rash of injuries to the offense, this edition of Oregon St. football is far from a complete team, and less than totally versatile, despite promotional statements to the contrary. But the Beavers are not without some major weapons, and watching today's practice made it apparent that Riley has determined its time to identify strengths, and especially mis-matches, and ride them hard.

Hence the term "brutal" football, as in brutalizing an opponent whenever and wherever you can, and doing it again and again. 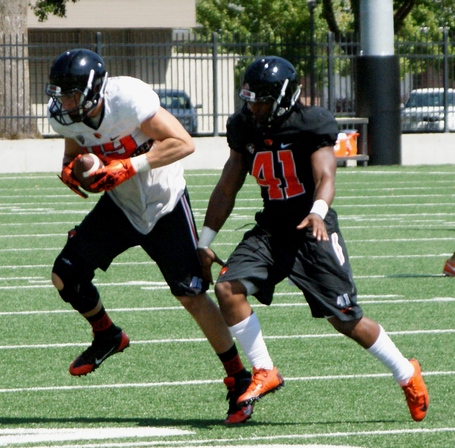 And though that will include literally brutalizing opposing secondaries, who may not be ready for getting physically abused by the likes of huge tight ends Connor Hamlett, above, and Caleb Smith, except for when Kellen Clute and Jacob Wark take a turn at it, it also means seeing just how many times an opponent can chase Victor Bolden the length of the field, like below. 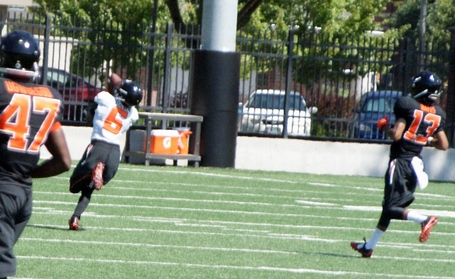 Or if the opposing corner is prepared to deal with speedy Xavier Hawkins on one play, the length of Kendall Hill on the next play, and then either Hunter Jarmon or Malik Gilmore the play after that.

Gilmore appears to have joined Bolden and Richard Mullaney as the 1st unit of receivers, but Hill, Hawkins, Jordan Villamin, Hunter Jarmon, and Rahmel Dockery all are seeing plays with the 1s, and there's likely to be situations where each of them still get onto the field. Dockery may find himself primarily on kick return duty, but both Sean Mannion and offensive coordinator John Garrett continue to talk of using the diverse depth at WR in ways that best take advantage of available matchups week to week.

FB Tyler Anderson still has not returned to action, after injuring his knee and leg, and most of today's drills were sans a fullback, even though both Ricky Ortiz and Ryan Nall have looked serviceable, Nall so much so that he is one of three freshmen Riley has on his "freshman alert", meaning they will likely play significantly, and not even be on the scout team, never mind red-shirt.

But though Terron Ward rejoined Storm Woods in the backfield, and both will see both carries and pass routes out of the backfield, it looks like for good reason its unlikely that fans will see anything less than a 60/40 pass run mix, at least on downs while the game outcome is still in serious question.

And after all, Oregon St. does have one of the best quarterbacks in the country in Mannion.

So that ratio shouldn't be any issue until the trip to USC, though, and may not be again until the trip to Stanford, so there's still time to work on things with the line, and try to get to that balance it took until late last season to find.

Speaking of that offensive line, with Dustin Stanton still out with an ankle problem, Will Hopkins out until probably at least the San Diego St. game, and Isaac Seumalo potentially out as long, and certainly for the opener, the depth chart certainly looks different than projections following spring ball. Fortunately, Grant Bays was back in action today.

Today, it was Gavin Andrews at LT, Garrett Weinreich at LG, Josh Mitchell at C, Grant Bays at RG, and Sean Harlow at RT.

Fred Lauina was in pads, but held out of drills, but is the one change to the current starting line that's likely before the Portland St. game, with Weinreich dropping to the second unit.

That second line currently is Bobby Keenan back at LT where he started, Nolan Hansen at LG, Roman Sapolu at C, freshman Kammy Delp at RG (with Weinreich up with the 1st unit), and true freshman Robert Olson at RT.

Riley will certainly try not to burn Olson's redshirt if he can avoid it, and Delp's as well.

Riley identified cornerback Dwayne Williams as the 3rd true freshman in addition to Nall and Hawkins that he expects to be called upon.

Defensively, DJ Alexander continues to slowly transition back into action, skipping most of the team on team drills (which had considerable contact considering it was a shells day, after the last doubles day of the year yesterday), but was in action with some of the scout/opponent work.

CBs Dashon Hunt and Naji Patrick both continues to be held out of contact and unit drills though.

And another player was missing again, and it sounds like it might be a long term issue, as kicker Trevor Romaine was not present at all, and Riley said he's "Going forward as if Romaine isn't going to be here."

Romaine's "off-the-field" issue, also termed a "non-football" issue, hasn't been explained yet, and though its purely speculation, its also not hard to connect the kicker's absence with the coincidental release of grades, and the computation of academic standing following summer term. If that's the problem, it would cost Romaine fall term, and the entire regular season.

Romaine, who took the kicking job as a true freshman, does have a red-shirt year left, and could return if his issue is resolved satisfactorily.

Redshirt freshman Garrett Owens has been Romaine's primary competition, and will take over the placekicking duties. Based on observations this preseason, Owens is not a major dropoff accuracy wise, though he's also by no means an upgrade, but he will be a loss of easily 10 yards, maybe 15, on kickoffs, which will put a substantial additional load on the coverage team.

Sophomore Ian Crist, from Silverton, and Sean Mannion's dad John's program, who transferred to Oregon St. after a redshirt year prior to last season, will backup Owens.

Finally, we leave you with an interesting view of how Dylan Wynn has gotten into game mode for the season. 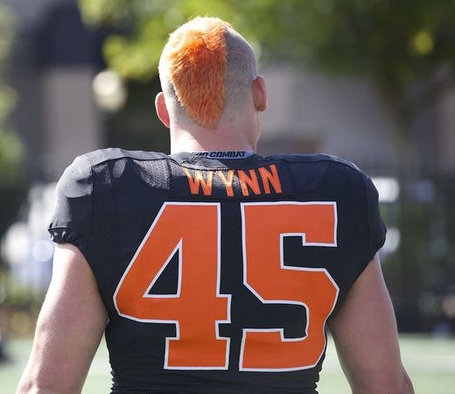