Oregon State once again opens the weekend in style behind some big bats and solid starting pitching.

Share All sharing options for: Davis Dominates In Desert

Two baseball teams met on the Old Pueblo Friday night and did baseball like things in front of a smattering of baseball fans. Thankfully, Oregon State did the baseball things better than Arizona did, and prevailed for a series opening, 11-2 win over the host Wildcats. 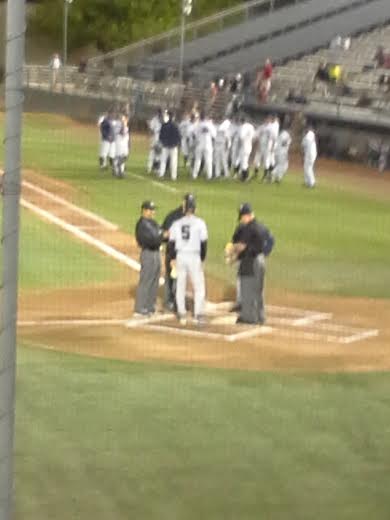 The Beavers jumped out early against the hosts despite Trever Morrison looking at a strikeout to open the game. Jeff Hendrix and Michael Conforto followed, however, with a pair of singles, and cleanup hitter Dylan Davis doubled them both home. That sent Kavin Keyes to the plate, who delivered the most memorable at-bat so far of the young season. He battled Wildcat starter James Farris for 14 pitches, sending foul ball after foul ball into the stands, which got the fans into it early. Farris would eventually get the best of the first basemen, as Keyes grounded out to short for the second out of the game.

Ben Wetzler did what Ben Wetzler does, and with an 11 run outburst, it's easy to overlook another masterful performance on the mound from the left-hander. But the Senior nearly took a no-hitter into the fifth inning (instead, it ended with two outs in the fourth), and ended his night after 7.1 innings with no runs and three hits.

With the way he was dealing, the three runs the visitors put up in the top of the fifth not only felt like insurance, but daggers as well. Andy Peterson and Morrison hit back-to-back triples to nearly the exact same spot on Hi Corbett Field to open the inning, and Hendrix continued the hit parade with a single to score Morrison. The fun was briefly interrupted by a Conforto groundout, but consecutive singles from Davis and Keyes made it 5-0, taking the air out of the Arizona fans and getting the Oregon State ones out of their seats. 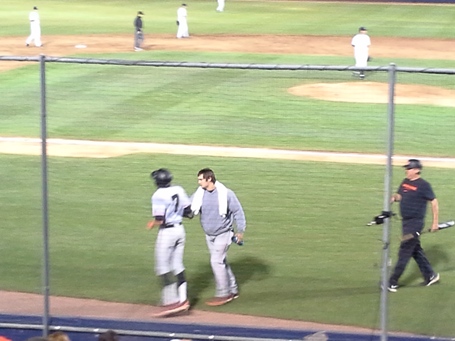 Morrison Is Congratulated After A Triple And Run Scored

The Beavers weren't done, however. They loaded the bases three times and scored four more runs on RBI's from Davis, Michael Howard, and Logan Ice. At this point, with each Wildcat pitcher struggling to find the strike zone and the runs piling up, most in attendance were either headed to the parking lot or gathering in front of the press box to watch the completion of the Kentucky-Louisville and Michigan State-Virginia games.

Wetzler was lifted in the bottom half of the eighth to a standing ovation from the visitor's section, and then Senior Brandon Jackson won a nine pitch battle against the first Wildcat he faced. Scott Kingery lined out into center field, and with the runner on first breaking with the pitch, he was easily doubled up. Oregon State quickly added its final two runs of the night in the top of the ninth on strong knocks by Conforto and Davis to push the advantage to 11. Davis finished the night with five RBI's and a run scored. 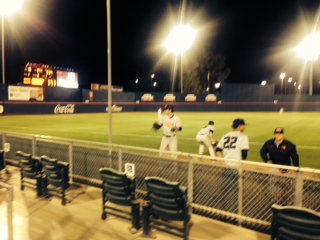 Trent Shelton was brought in to "close things out" in the bottom half of the inning, but a single and triple from the first two batters faced spoiled the shutout attempt. With the Beavs clearly willing to concede runs for outs, Trent Gilbert picked up an RBI on a groundout to second, but the game would mercifully come to an end when Kenny Meimerstorf hit a high pop out to the second basemen.

The win was Oregon State's first in seven days and improved its record to 20-5. Arizona fell further down the standings and now sits at 11-17. The Beavers will send sophomore Andrew Moore to the mound for a 4:00 PM first pitch on Saturday, another game that will be televised by the Pac-12 Networks.

This was my first Beaver baseball game outside the state of Oregon, and it was a blast. Oregon State fans really do travel as well as Jay Reese and Mike Parker have been saying over the years. If the crowd of 3,254 wasn't split 50/50, it was very close.

Hi Corbett Field was very nice and scenic, but it will always be too big for the Cats to get any sense of a home-filed advantage. It's just impossible to accomplish when empty seats outnumber fans by over 6,000. 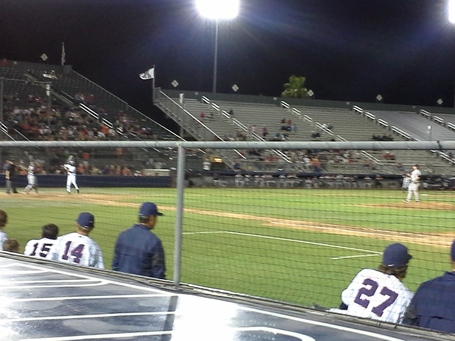 Of course, it's never not football season! While on campus I stopped by Sancet Stadium, the on-campus baseball park, which is now used by Rich Rodriguez and company as a practice facility. Arizona's spring ball is underway, and that got me itching for some fall Saturday afternoons. First thing's first though; let's get to Omaha. 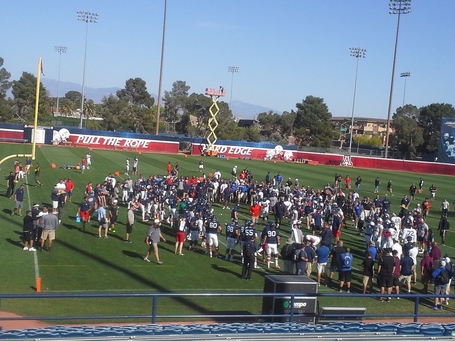 All photos by Connor Pelton (@ConnorPelton28)