Yesterday was "Media Day" for the Super Bowl, but it was also "Media Day" for Oregon St. baseball, as the #2 ranked Beavers prepare to embark for Arizona for next week's season opener against Gonzaga, defense of their Pac-12 title, and hopefully, embark again for Omaha.

Listening to head coach Pat Casey is totally unlike the conversations with the press we are familiar with from football coach Mike Riley, and the basketball coaches Craig Robinson and Scott Rueck, and can require considerable reading between the lines (foul lines and otherwise). Yesterday was no exception.

For example, when asked about the draft status for Michael Conforto and Dylan Davis, Casey said "I think Dylan is going into the Marines, whereas Michael is more a Navy guy."

With many of the pieces back from last year's final 4 team that won a school record 52 games, there are lots of reasons why Oregon St. is ranked #2 (#3 in the preseason Coaches' poll released today), and there are widespread hopes and expectations that a title defense, and not only a return to Omaha, but a serious run at a 3rd National Title are in the works.

Casey, of course, said "I'm going to say the same thing I said last year'; I'm not impressed at all."

The unprecedented dry weather in January has allowed Oregon St. to get in a lot of actual, baseball work, including plenty of baseball game situations in intra-squad games.

"We will be as well prepared to play opening day as we ever have been," Casey said. "How we play will be dictated by what happens when they start calling balls and strikes."

Casey noted that the installation of the turf at Goss Stadium has helped, over the days of tarping, but also noted that there have been seasons where his Beavers' first outdoor, on the field activity has come when they take the field for the first game.

It's important when, despite the pieces that give rise to lofty early expectations, and also because of them, there are actually a lot of questions to be answered.

"I'm always concerned when you have to replace three people up the middle," Casey said.

Indeed, when you think about it, there's really only 1 player whose' position and role is already settled; Conforto will be in left field, and the 3rd spot in the batting order.

After his first two campaigns, there are a lot of people nationwide who are scared of both Conforto's bat and his arm, and he's the single biggest reason for that #2 ranking.

That's not to say there aren't several other players who will be key, with no questions about their getting their playing time. Specifically, Andy Peterson, Davis, Andrew Moore, and Ben Wetzler. But other question marks makes how Casey uses each them still an uncertainty.

With the departure of shortstop Tyler Smith, one of those up the middle holes, the question of who replaces Smith is one of the big ones. Peterson could slide over, and Casey acknowledged that's a possibility, but noted while Peterson could play short very well, Casey doesn't want him to, preferring to keep him at 2nd.

Freshman Trevor Morrison appears to be the preferred solution at short, but its also possible to move Peterson if need be, a decision that's made easier by the presence of senior Kavin Keyes, who can and has capably handle second.

What happens at third base could be a factor there, and Oregon St. fans will recall the ups and downs at that position last year, especially early in the season.

Another freshman, Tyler Mildenberg, has a chance to seize the position, both defensively and with his bat, but freshman are always an unknown early on. Keyes could also become a fixture here, but he could be needed elsewhere.

And what of senior Jerad Casper? Casey made a passing reference to Casper's up and down season, and at this point its hard to tell if Casper's window of opportunity with Casey has passed, or if he could finish his career strong. 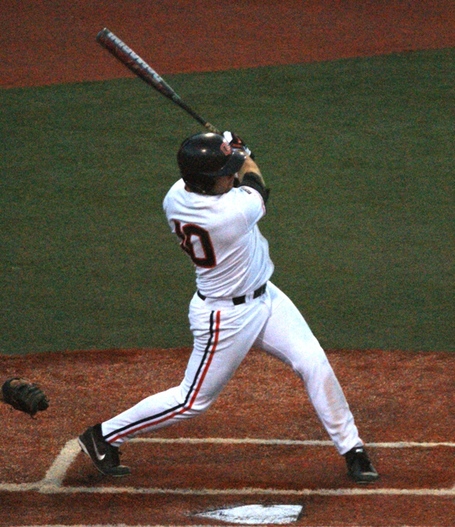 Davis, above, will be in the middle of the mix too, but will he be the everyday right fielder? Or will he be slotted at DH? How and where Keyes, who could also DH, winds up plays into that decision. And Davis is still interested in pitching too. With solid options on the weekend, but a wide open situation for mid-week and special situations, which have become just as important when you are seriously talking about earning a National seed, and hosting a super-regional, Davis' fastball might remain in the Casey toolbox.

The other spot up the middle of course is center field, vacated by the graduation of Max Gordon, the undersized dynamo Casey called "The guy that shouldn't be playing who played every day and was a spark."

Sophomore Jeff Hendrix who played well, and Casey even characterized as the best defensive player the Beavers had, is likely to take over, and probably represents the smallest question mark of the many. But even that could depend on what Davis is doing, and in turn where Casey can put others.

Another freshman, Billy King, has impressed some, and could push for playing time in the outfield, as will football recruit Hunter Jarmon. Jarmon and Hendrix give Oregon St. serious speed, and that could help on the base paths, an important consideration in Casey ball, where the infield bunt is sometimes considered to be "power hitting".

Casey made another of his passing comments in reference to Jarmon and his speed, and how it could help "if he makes the team." The comment was as much in regard to Casey's stated dissatisfaction with the NCAA 35 player roster limit, whereas Casey has 41 players shown in this year's media guide. Though some red-shirting is sure to occur, Casey made it clear he's like to have opportunities for the "36th and 37th guys" to have a chance to help themselves help the team. But Jarmon's football commitments can't be dismissed, and though both Casey and Riley are very open to the concept, both programs are also at the level where total focus at every position on the depth chart, never mind the field, are critical.

Casey did acknowledge that these Beavers could be a base running threat, something somewhat lacking last year, though he also distinguished the difference between having the speed to run bases and being good at base running.

First base is another question mark, with the need to replace Danny Hayes. Sophomore Gabe Clark seems like the likely choice, but that another issue where Davis could even enter to the equation.

And with Jake Rodriguez having left early for pro ball, who will catch? Nate Esposito was the other Oregon St. catcher last season, but enough balls got by Esposito, both receiving and at bat, that its another unsettled spot. Freshman Logan Ice, and possibly also freshman Mason Fishback, are possibilities, and 10 days before the season opener, Casey said if Oregon St. had played yesterday, he didn't know who would start.

This one could come down to who works best with the strength of the lineup, the starting pitching. 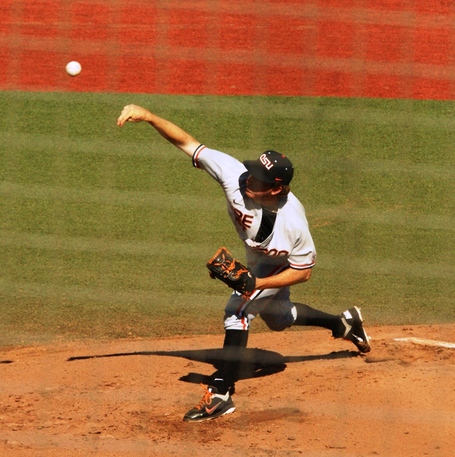 Both sophomore Andrew Moore, above, a freshman All-American, and Ben Wetzler, last year's Sunday starter return, and Jace Fry seems healthy, and the likely 3rd member of the weekend rotation.

Who takes over for Matt Boyd as the Friday night starter is still uncertain though, hence the reason why neither Wetzler nor Moore's role is "settled", even though both will be seen every weekend.

The early inclination is to put Wetzler into the Friday night spot, keeping Moore on Saturday, when he was extremely effective. And it would make sense, with the lefty Wetzler and another lefty in Fry wrapped around Moore's right-side delivery, rather than having lefties back to back.

But if Wetzler should struggle against a fresh team, instead of one that just went against Boyd and Moore, it might be necessary to move Moore into the Friday night spot.

Still, its a solid rotation in any order.

"I like that fact that we have some experience coming back on the mound," Casey said in a classic Casey understatement.

The bullpen is led by senior Scott Schultz and sophomore Max Engelbrekt, and its a reasonable vision to see them in the long relief and closer roles. But Schultz, though dominating at times, also had his shaky moments, and it sounds like off-season work might indicate that's still the case, after Casey commented on the need for Schultz to find consistency.

Engelbrekt emerged as the season wore on, but isn't talked about as a premier closer in the Pac-12 conference. Watching him will be one of the most intriguing parts of the pre-season schedule.

Behind them, there is a small army of arms, and at this point, any one of them could emerge or disappear to the back row of the bullpen bench.

So while there's ample material to work with, including at least a half dozen sure to be stars, watch for a major dose of Casey in mad-scientist mode in the first month of the season, as he tries to find the right mix for some of the magic in May and June he's so often found before.