Share All sharing options for: Eastern Washington Wins Shootout At The Reser Corral

Oregon St. quarterback Sean Mannion completed 37 of 43 passes, 86% (!), for 422 yards and 3 touchdowns, and with ZERO sacks or interceptions. Brandin Cooks had 13 catches, for 196 yards, second most in the country so far this weekend, and 2 of those tds, and had 210 yards of total offense. The Beavers also ran for over 100 yards, and 3 more touchdowns, 2 by Storm Woods. Connor Hamlett, below, had a career day, with 8 catches for 85 yards, and Mannion's other touchdown toss. 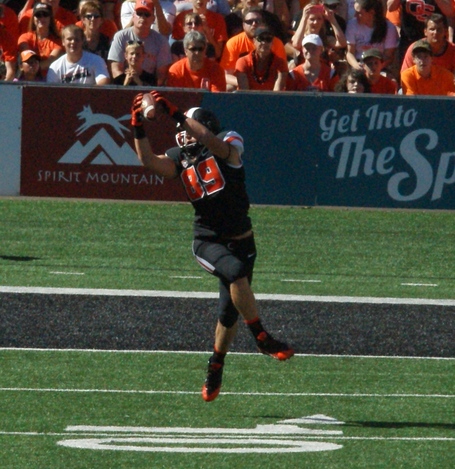 And it wasn't enough.

Tell anyone, including even the most red and white Eastern Washington fan, that would happen in advance, and they would have believed it would guarantee an Oregon St. win. 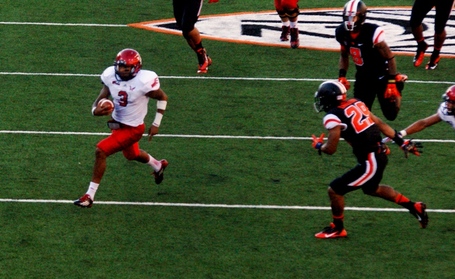 Adams, above sprinting away from the reach of Ryan Murphy and Tyrequek Zimmerman, countered Mannion with a 23 of 30 (77%) day, for 411 yards and 4 touchdowns, plus another 107 yards (giving him 518 of the Eagles total of 625 yards against the Oregon St. defense), and 2 more scores, including the 2 yarder that would prove to be the game winner, with 18 seconds left in the game.

Even when Adams was out, the Eastern Washington passing game was effective, as Anthony Vitto completed 3 of 4 attempts.

It was both a courageous and tactically efficient performance to be sure, but also the latest in an all to long list of major failures by the Oregon St. defense when faced with a quarterback that is in one way or another mobile, and also creative.

Some strong defensive efforts last year, including against Wisconsin, a spread offense in Washington St., BYU, to a degree against UCLA, Washington, Stanford, and even for most of the game against Texas (the 4th quarter not withstanding), gave the impression that the addition of NFL veteran defensive backs coach Rod Perry and LB coach Trent Bray might have the Beavers turning the corner. Even though Arizona and Oregon, and when it mattered, Washington and Texas suggested otherwise.

Saturday necessitated a re-evaluation, which we'll get into shortly.

First, some points of perspective need to be recognized, though. Eastern Washington's upset was hardly an isolated event; it was actually the 8th game of opening weekend where a FCS team beat a FBS squad. Yes, 2 of them, Southern Utah's 22-21 win over South Alabama and Samford's 31-21 victory over Georgia St. were over teams transitioning, and still closer to being FCS teams themselves. But 5 were over BCS Automatic Qualifier conference opponents.

And interestingly, San Diego St., whom we will be seeing in 3 weeks, gave up 3 unanswered touchdowns and lost to Eastern Illinois 40-19. The Aztecs were expected to compete for the Mt. West West division title, and were a bowl team last year.

And while it was Eastern Washington's first win ever against a Pac-12 team, they have beaten FBS opponents 8 other times. It was also the third year in a row the Eagles played a northwest Pac-12 team to a 3 or 4 point decision. Clearly, they can play at this level. 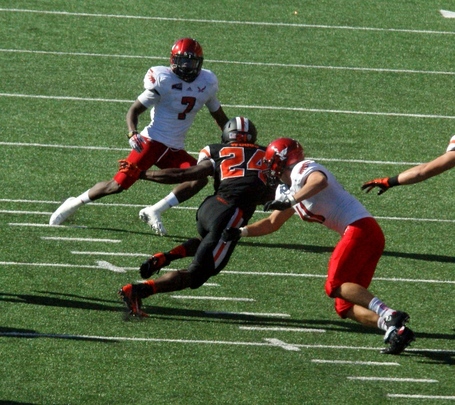 It's also worth quieting talk about whether the Beavers should have run the ball more, something even head coach Mike Riley almost read from the script about in the post-game press conference. It's true Woods, above, didn't approach his objective of a 100 yard rushing day, but in aggregate, Oregon St. did, and Woods was over 100 yards when his reception yardage is added. And, as noted, the Beavers scored 3 touchdowns on the ground. 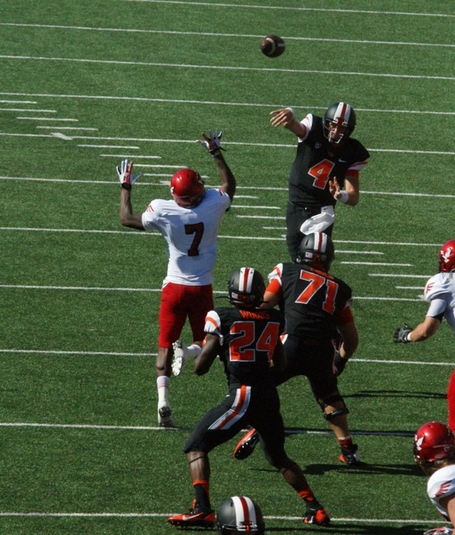 But Mannion, above, started the game with 12 straight completions, and opened the second half with 11 completions in a row. At one point in the 4th quarter, Sean was on a 20 of 21 run that was actually better than that, as he also completed a 2 point conversion toss to Tyler Perry, below. 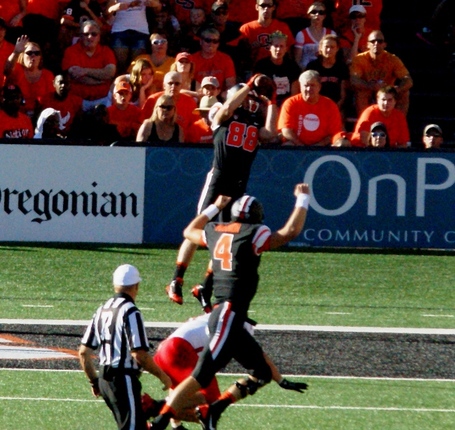 When a quarterback is that accurate, it only makes sense to stay with him, especially in a game where it was apparent that the Beavers were going to have to score essentially every possession. Playing field position ball won't work when the opponent is capable of driving for a score even if they were made to start their drive out in the parking lot on the other side of the Valley Football Center.

There's no blame to be placed on the Oregon St. offense in this one. Even the inability of Isaac Seumalo to play with his knee injury, and the absence of Gavin Andrews didn't really disrupt things; center Josh Mitchell did a completely serviceable job in his first start, and Roman Sapolu played well, even recovering a fumble.

And even after Eastern Washington took the lead the last time, Mannion, with next to no time to work with, and no time outs, still got the Beavers in position for Trevor Romaine to at least take a shot at getting the game into overtime. Ironically, the same wind that gave the 52 yard attempt a chance also pushed it wide to the right. 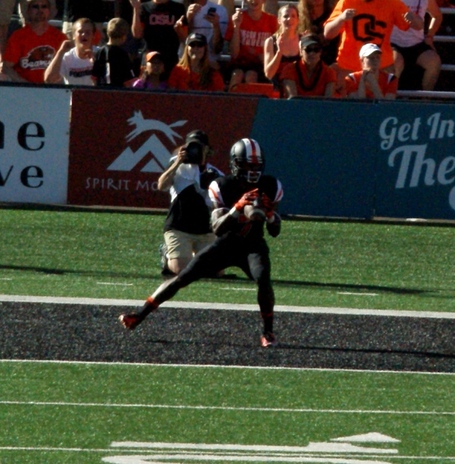 Cooks, above, had a near record-book day, and the new uniforms looked great. But without an effective defense, it was just eye-candy.

So, how could the defense seemingly regress so badly, given most of the players are more experienced and better developed versions of the ones that did play so well last season?

For one thing, its all the more evident how important All-American Jordan Poyer was. Poyer's on-field ability to make adjustments was at once appreciated and still under appreciated.

Yesterday's in-game and post game commentary, both in the media and the fan base, contained a lot of comments about the Oregon St. defense being out of position. Radio analyst Jim Wilson even went as far as saying the highly athletic Beaver secondary looked slow.

One thing watching from the end zone instead of the side lines most observe from revealed was that Oregon St. often over-rotated. This was especially a problem in the 3-2-6 dime package the Beavers broke out for the first time with regularity yesterday. Think back about how many times you saw Poyer running around pre-play pointing and yelling. What he was doing was making subtle assignment adjustments, and so far, there is no one who has assumed that role, able to understand the whole field.

Without knowing what the base defense call is, its hard to fully fix fault on some situations, like the first of Cooper Kupp's 2 touchdown catches, where the Oregon St. secondary got caught with 2 safeties, Ryan Murphy and Zimmerman, with edge coverage responsibility, after Rashaad Reynolds followed the initially widest set receiver inside on an underneath route.

Crossing routes where decisions have to be made quickly about coverage switches are some of the most challenging for a secondary. Poyer was able to make these reads and calls, and so far, the focus has been more on staying with initial assignments. Perry knows this, but do any of the dbs have the ability to assume the on-field responsibility for changing coverages without a breakdown? Can Perry coach some one up to this level?

The Role of Alexander's Absence

The other key absence was D.J. Alexander, who is still not expected to be back until probably the Utah game in week 3, a result of his bruised right knee.

That's not to place blame on Jabral Johnson, who actually filled in well for Alexander. Johnson particularly played well early and late in the game.

But the timing of Alexander's injury was particularly problematical, as it came late in the portion of camp where the focus was on what Oregon St. does, and only shortly before the focus shifted to mimicking what Eastern Washington does.

As a result, it was advanced topics that got missed. It had to be more difficult to make defensive adjustments on the fly in the first half. Starting the second half, despite the chorus of complaints about Oregon St.'s lack of adjustments, there actually were some.

Admittedly, the first of 2 injuries to Adams was also a contributing factor, but the Beaver defense did slow the Eagles, while Mannion was directing a 15-0 run over most of the 3rd quarter. It was the first time defensive coordinator Mark Banker was able to dial up some blitzes, which Banker is usually very hesitant to employ, and Johnson probably doesn't have down due to his lack of playing time to date.

Kupp's second score, as well as the early 4th quarter 47 yard touchdown bomb to Blair Bomber, below, illustrate the secondary effect of Adams' mobility, as well as both the incompletely installed defense, AND its impact on a base tenant of Banker's defense. 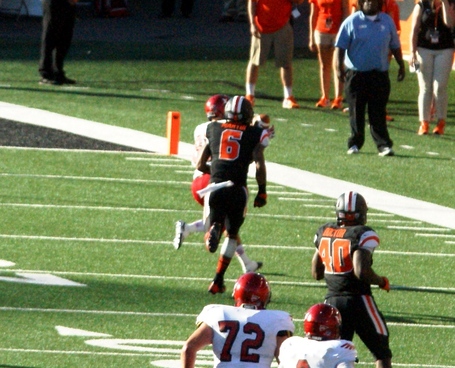 Michael Doctor played an active, and at times effective, game, finishing with 7 tackles, including 2 sacks in pass blitzes, as well as 4 assists. But lacking a more effective run blitz package, it becomes necessary to bring more safety run support. Both Kupp and Bomber blew by initial coverage, and there was no safety help over the top, because there was no safety left to provide over the top help.

Having that deep help is essential in Banker's base scheme to stopping the vertical passing game.

But there's more to the problem than just secondary assignment decisions, and it brings us to the real brilliance of the Eastern Washington effort, and also the other system shortcoming of the Banker defense.

The Eagles nullified Oregon St. defensive end Scott Crichton, who had no tackles, and only 2 assists. This played a huge role in Adams' ability to run wild.

It's not as though the Beavers didn't do some creative things with their defense; DE Dylan Wynn frequently operated from an inside, DT position, in both 3 and 4 man fronts, with the objective to get direct pressure on Adams, and it actually flushed Adams on a number of occasions.

Trouble is, that was often the worst thing that could have happened, given his ability to both run and throw on the run.

Banker's defense by his own admission does not focus on containment, relying instead heavily on pursuit to control outside the pocket action. Neither Devon Kell nor John Braun were effective in sealing edges, a big problem given that Crichton wasn't effective at anything against a scheme designed to ensure he became a non-factor.

Further, today's mobile athletes are at their best in space. It's the fundamental change to the game that has come about primarily to capitalize on loss of containment.

And though Eastern Washington did miss out on a couple of more touchdowns, not executing when receivers were in position for a walk-in score, the reality is there are plenty of offenses that can capitalize on any defensive shortcoming. Even Mannion's spectacular completion percentage was only third best of the weekend; Troy's Corey Robinson completed 30 of 32 passes, 94%, in the Trojans' 34-31 win over UAB, and with the weekend not even complete, there are already 30 FBS quarterbacks that completed 70% of their passes OR BETTER. The Beaver defense wasn't the only one taken apart on opening day.

The other popular topic of complaint was Oregon St.'s poor tackling. This is a predictable by-product of the move away from finishing plays in practice, the hits and tackles that can cause injuries, but have to happen in games.

Balancing this is a challenge all coaching staffs are faced with, but Oregon St. as much so as any. But another common cause of poor tackling is poor angles, and over-rotation and direct route techniques instead of containment priority are both primary causes of poor angles.

Calls for Banker's job of course arose again before the game was even over, but as long as Riley is around, that's unlikely to happen. Whether more subtle adjustments, and a counter to the offensive line schemes designed to neutralize Crichton that are sure to be coming, can be accomplished will hold the key to whether Oregon St. can recover, either next week against Hawaii, or over the course of the season.