Oregon St. freshman pitcher Andrew Moore brought more of what he's done all year to the ball park Saturday, and the result was his second consecutive complete game shutout, and the third one in 4 outings. As a result, the Beavers locked up the Pac-12 championship, and the conference's automatic bid to the post-season, with a 4-0 win over Washington St.

At worst, Oregon St. will have a tie with Oregon for first place in the Pac-12, but the Beavers have the tie-breaker.

Dylan Davis delivered a no doubt 3 run home run, his 3rd of the season, to left field in the 7th inning, following up 2 out singles by Andy Peterson and Michael Conforto, but it was merely extra insurance, as the run Davis drove in with a single to right in the first inning that scored Tyler Smith, one of 9 seniors honored before the game on "Senior Day", was all Moore would need. The 4 RBI's increased Davis' team leading total to 51 for the season.

After the 11 inning 10-9 upset loss to the Cougars last night, which tore up the Beaver bullpen, Moore did what he's done 4 times this season after Oregon St. losses; go out on Saturday and restore order, and save the rest of the pitching staff in the process. Moore has 3 wins and a save in games the next day after things have gone awry.

Moore was at 100 pitches after the 8th inning, but there was no chance Oregon St. coach Pat Casey was going to take the ball from Moore, after his decision to give Matt Boyd the rest of the night off with the Beavers up 8-1 in the 8th blew up in his face. The unflapable freshman got the first out of the 9th inning on a fly ball with his 1st pitch, needed 2 pitches to get a second fly out, and struck out Ian Sagdall on 4 pitches to put the game away.

The home run that chased Washington St. starter Joe Pistorese, who had himself pitched a strong game, was welcome relief for the crowd of 3,417, the largest at Goss Stadium since the renovation in 1999 (*), after Oregon St. had failed on multiple occasions to add runs to assist Moore.

Bad base running in the 4th inning resulted in Ryan Barnes being put out at the plate unforced, after Barnes and Danny Hayes had led off the inning with singles to put runners on the corners, and the Beavers also stranded 2 runners in the 6th.

But defense, especially by catcher Jake Rodriguez and Moore, kept erasing Washington St. threats to Moore's 1 run lead. Rodriguez threw 2 Cougars out stealing, extending his kill streak to the last 13 runners who have dared to try to run on him, dating back 20 games.

Moore made a shovel to Rodriguez that "J-Rod" caught bare-handed to tag out the Cougars Jason Monda in the 4th inning to preserve the shutout. 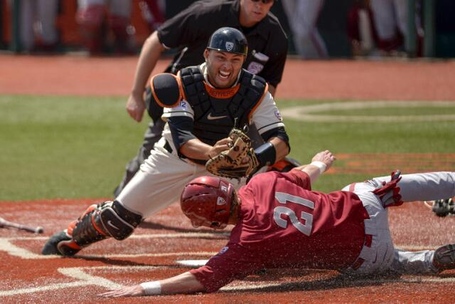 "We practiced that play for hours every week," Moore explained.

Moore also made multiple put-outs covering first base, including a running unassisted scoop and step play only he could have gotten to.

"That was a great play at the plate," Casey said. "And he made a couple of great plays at first that I know some of our pitchers can't make."

The 107 pitches threw equaled his season high, but the 7 strikeouts he served up also equaled his season high against Bryant. Moore did give up 6 hits, more than the combined total from his previous 2 complete games, both of which were 2 hitters, but he didn't allow a walk all afternoon, and was consistently able to make the pitch he needed to.

The win, which Moore only needed 2 hours and 15 minutes to accomplish, improved the reigning Pac-12 Pitcher of the Week and National Co-Pitcher of the Week, to12-1 for the season, keeping him the conference leader in wins.

Pistorese took the loss, and dropped to 5-5 for the season.

(*) The game was not a sellout, due to the additional seats added in left field inside what is usually the indoor batting cage.

Oregon St. likely eliminated any uncertainty about a national seed with the win, but the guaranteed berth takes all doubt out of the equation, and runs a flag up the pole for the Beavers, who will be playing in the post-season for the 5th year in a row. The schedule won't be known until the first of the week, but its likely Moore will get to celebrate.

"I'm 19 next Saturday, and it would be cool to celebrate by pitching," Moore said.

That might work out better for Beaver Nation than whomever draws the assignment against Moore, though.

Before that, Oregon St. and Washington St. close out the regular season tomorrow at noon, when the Beavers' Ben Wetzler will try for his 8th straight Sunday win, which will eliminate any chance of Oregon sharing the top record in the conference, should they win today and tomorrow at Utah.