Washington's defense throttled Oregon St, in the second half, and pulled away for a 10 point win in a game that was never that lopsided until Andrew Andrews' free throws in the final half minute that produced the final score of 72-62.

Oregon St. went over 6 minutes after a Challe Barton basket with 9:18 left without another field goal until an Eric Moreland putback basket that kept the Beavers within 6 points of the Huskies, and the only other basket from the field the rest of the game was a 3 pointer by Ahmad Starks with 46.7 seconds left.

The game differed from the last 2 meetings between Oregon St. and Washington, both Beaver wins, in that Oregon St. did not get out to large early leads, as they did last month in Corvallis, when they went up by 20 points, and last spring in the Pac-12 Tournament, when the Beavers built an 18 point lead.

Despite Joe Burton getting off to a fast start, scoring 10 points in the first 10 minutes, and Oregon St. actually getting out in transition better than Washington, Burton's basket exactly halfway through the first half only put the Beavers up 20-19.

So when Washington was only down 34-32 at halftime, the Huskies didn't need as much of a second half run as they made in those prior 2 losses, in both of which they erases all but 1 or 2 points of the much larger deficits they faced.

For that matter, Oregon St. didn't allow as large a run, but when Washington opened the second half with a 14-5 run that opened up a 46-39 lead, it was enough, as they never trailed again.

Historically, Washington has usually fared better than anyone else in the conference against Oregon St.'s 1-3-1 defense, and that was the case again tonight. As a result, the Beavers used much more 2-3 zone, and only reverted to the 1-3-1 one time in the second half. That led directly to a Shawn Kemp Jr. dunk, and the 1-3-1 would not be seen again for the rest of the night.

Burton never scored another point again after his initial fast start, but he was effective in shutting Washington's 7' center Aziz N'Diaye, who had only 1 point and 1 rebound in the first half, and finished with only 5 points and 4 rebounds. 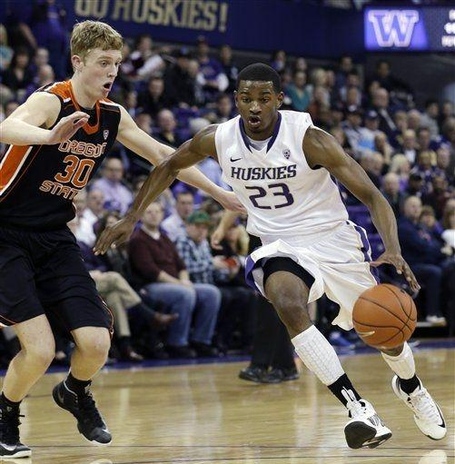 But the Beavers had no answer defensively for C.J. Wilcox, above, driving past Olaf Schaftenaar (AP Photo by Elaine Thompson), who snapped out of a progressively worsening slump in recent games that saw him held to single digit scoring in Washington's last 2 games, and shrugged off the effects of a stress fracture that's caused the slump, with a game high 24 points. 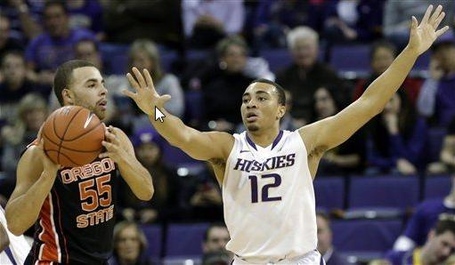 That was especially a problem when Roberto Nelson, above being guarded by Andrews (AP Photo by Elaine Thompson), struggled from the field. Nelson finished with a team high 19 points, but 11 of those came on the 13 free throws Nelson took, as the Beavers' leading scorer made only 3 of 16 shots from the field.

Starks and Barton each had only 8 points, and Moreland only 7. And Moreland also had only 6 rebounds, as Washington out-boarded the Beavers 37-27. The margin was as large 16 deep into the second half.

What Washington's defense, aided by a noisy purple crowd of 8,454, one of the largest crowds Oregon St. has played in front of this season, accomplished in throttling Oregon St. in the second half, when the Beavers made just 7 of 29 shots, 24%, can't be overstated, as Oregon St. is the #3 scoring offense in the Pac-12, and was held a dozen points below average.

"I don't want to take anything away from them (Washington), but you can't play a team like this, with such a rich history and culture, away from home, and come out out of sorts," Oregon St. Craig Robinson said. "It felt like we were out of sorts right from the beginning."

The frustrating offensive performance only got worse as the game wore on, and the urgency of the situation increased.

"We were taking shots a little too quickly," Robinson added. "Its time for us to take a look at ourselves and determine if we are capable of having a focused effort on a regular basis, not just one here and there." 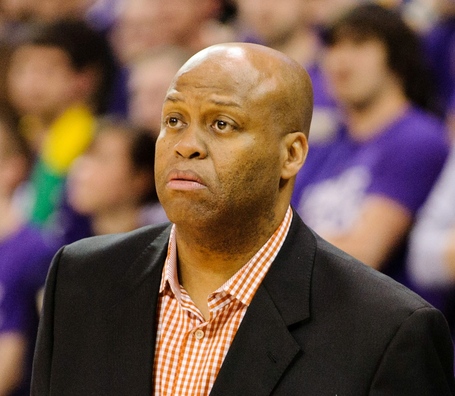 Robinson, above (Steve Bisig, USA Today Sports photo), also saw the disappointing defeat, one that came after a highly competitive game between the old northwest rivals, in a different light than several recent losses by smaller margins.

"I had felt even in the losses, we were making progress," Robinson said. "Today, I thought we took 2 steps back."

Starks' late 3 pointer, though not enough to bring the Beavers from behind, was a noteworthy bucket, as it moved Starks past Chris Stephens' record of 180 career 3 pointers at Oregon St., and put Starks into a tie with Gary Payton for the single season record for 3s for the Beavers, with 82.

Oregon St. (13-13, 3-10) slipped into 11th place in the Pac-12, and returns to Gill Coliseum for the last 2 home games of the regular season this week, It will be a rare nearly normal week, with games on Thursday against Stanford (albeit another very late, post 8 PM start), and then senior day for Burton, the Beavers' only graduating player, against California, Saturday at 3 PM.