Share All sharing options for: Meat of the Bowl Season Pac-12 TV Schedule

What was originally about a week long, hence the term "bowl week", has long since expanded to take over 2 weeks to play, but the majority of the bowls still occur from following Christmas to shortly after New Years Day. The Pac-12 has 1/3 of theirs in the books, with still 6 to go between today and next Wednesday.

The Conference appeared to get off to a good start when Washington St. raced out to a 22 point first half lead over Colorado St. in the Gildan New Mexico Bowl, the first bowl game of the season, and it still looked promising with 3 minutes left, and Washington St. still up by 2 touchdowns.

But the Cougs Couged it, fumbling twice when they could have run out the clock, which led to the Rams running off 18 unanswered points to pull out the 48-45 win.

The rest of the first week of bowl season went much better for the Pac-12, as both USC and Oregon St. downed their Mt. West opponents by multiple scores.

And of course, Oregon St. got off to a hot start in the Sheraton Hawaii Bowl, opening a large lead and holding off Boise St. for a comfortable 38-23 win on Christmas Eve.

It's the last edition of this bay area bowl that has had a variety of names and sponsors (Emerald nuts, and now Kraft, have moved on), that will be played in San Francisco, and in the baseball park the Giants call home, as the game will relocate to the new stadium in Santa Clara that the 49ers are building next year.

The Huskies have finally broken through the 7 win barrier that seemed to be their ceiling the last 3 years under former head coach Steve Sarkisian, who has taken the USC job. Former Husky great and recent quarterbacks coach Marcus Tuiasosopo is the interim coach for this game.

It will be the last game as a Husky for quarterback Keith Price, and in a situation similar to one Oregon St. fans are familiar with, possibly RB Bishop Sankey, who led the Pac-12 in rushing, and will make a decision after the game, possibly very shortly after, on going pro a year early.

The Cougars are no longer a Mt. West member, where all of the conferences' opponents have come from so far, having gone independent for 3 years now. BYU has had an up and down season, with dominating wins over Texas and Boise St., and a close loss at Wisconsin, but head-scratching losses at Virginia to start the season, and at Notre Dame.

As qb Taysom Hill, who leads BYU in rushing as well as passing goes, so goes the Cougars.

The Huskies' secondary will be short handed, as Marcus Peters has been suspended for the first quarter, and Will Shamberger for the entire game.

The conference has 2 teams in action on both Monday and Tuesday, New Year's eve, as well, and of course, Stanford in the Rose Bowl on New Years' Day.

After bowl season started as Mt. West week, with games against regional rivals that are current or past members of the Mt. West, Monday is BIG XII Day, and an especially big day, as both games feature top 15 teams from the Pac against unranked BIG XII opponents. Wins, preferably decisive ones, are required if the Pac-12 is to lay claim as the 2nd best conference despite being the only AQ conference besides the American to not have an at-large BCS bowl bid team.

It's the first time the Ducks haven't been in a BCS bowl in 5 years, and motivation is as big a question as the health of Marcus Mariota, who hasn't returned fully to his dual threat form that made Oregon invincible until a knee injury reined in his running.

Still, its another double digit win season in new head coach Mark Helfrich's first season. But while Oregon fans apparently aren't as excited about the Riverwalk as Oregon St. was, a bowl win will still make a dramatic difference in the offseason over a loss in what has become the Mack Brown Bowl.

It's the second year in a row the Longhorns have only to drive 85 miles down the freeway for their bowl game, and because of that non-BCS, and even non-Cotton Bowl, destination, its the last roundup for Brown, who has a National Chanpionship as the Texas coach, but is stepping down after what could turn into a re-enactment of the Alamo for Oregon if the Ducks aren't prepared to put Texas away early.

Whether they are in the Brown camp or the glad they are replacing him camp, Burnt Orange Nation will still unite to try to write a special chapter in Texas Football Lore at Oregon's expense.

What former Portland Trail Blazer executive and Arizona St. Athletic Director Steve Patterson does about hiring the next Texas football coach CEO will be on everyone's mind, but is an issue for the new year.

Of more immediate interest to Pac-12 fans, its also the last game for long-time Duck defensive coordinator Nick Aliotti, who plans to retire after the game.

The Pac-12 South champion Sun Devils, and second year coach Todd Graham, except for another of those head-scratchers against Notre Dame, had a dominant year when not playing Stanford. The Cardinal beat them twice, including in the conference Championship game, which is why they are playing in Pasadena instead, but otherwise, this is the best team to come out of Tempe in a long time.

The Red Raiders will remind Oregon St. fans in some ways of their Beavers. Texas Tech rolled undefeated through mid-October, jumping off to a 7-0 start. Then they ran into actual competition, and against teams that were familiar with them and well coached.

Oklahoma, Oklahoma St., Kansas St., Baylor, and Texas all took the Red Raiders to the wood shed, and only the Sooners' 8 point win wasn't a blowout.

Tuesday is ACC Day, with both games against the generally over-rated east coast circuit. Though the ACC is favored to break the SEC's 7 year stranglehold on the BCS National Championship, the conference has otherwise been a distant 4th or even 5th in terms of overall strength.

Carey, who led the country in rushing yards last year for the 'Cats, was the Pac-12 Offensive Player of the Year this season, and ran for over 100 yards in every game he played in this year.

Williams was a Heisman Trophy finalist, and led the country this year heading after the regular season, with 2,102 yards.

Like in every other Pac-12 bowl game, Arizona is favored, but this could be one of the closer calls the conference has. The emergence of B.J. Denker as a multi-threat quarterback for the 'Cats should provide a difference the Eagles will have a hard time countering though.

The Hokies lost 3 of 4 down the stretch, to Duke, Boston College, and Maryland in overtime, before a season ending win over rival Virginia, yet still finished 2nd in the ACC Coastal Division. In addition to their usual strong special teams under coach Frank Beamer, who has the longest run of bowl appearances of any active coach, Virginia Tech's strength is their defense, which gave up the 8th fewest points in the country.

The Bruins finished 2nd in the Pac-12 South, with their losses to Arizona St., and the top 2 teams in the North, Oregon and Stanford. UCLA is yet another team with a future course setting decision to come after their bowl game, when quarterback Brett Hundley makes his decision about whether to return to Westwood or head on to professional football.

Though often overlooked in the myriad of bowls, the Sun Bowl is one of the oldest, and this is the 80th edition. A win by the Bruins would accomplish a lot of milestones, winning 10 games and finishing in the top 25 for the first time since 2005, as well as winning their first post-season game in 4 years.

Exclusive of playing for the National Championship, the Rose Bowl is THE BIGGEST THING you can do in college football if you are in the Pac-12 (or the B1G 10), and for the second year in a row, Stanford is doing so. For the first time in 26 years, since they beat USC, Michigan St. is too.

The Spartans and Cardinal are both among the best defenses in the country.

That darned "at Notre Dame problem" is the only blemish on the Spartan's season, which was capped by their 34-24 win in the Big 10 Championship game over Ohio St. that snapped the Buckeyes' 24 game winning streak.

Stanford didn't have a problem with the Irish, but then they played them at home, which makes a difference. The Cardinal did experience their share of road woes, getting upset at Utah and USC, but were 8-0 in the rest of their games against bowl teams. 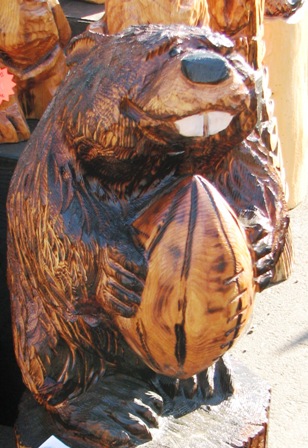