Oregon St., and especially senior CB Rashaad Reynolds, scooped up a 38-23 win over Boise St. in the Sheraton Hawaii Bowl. Reynolds scooped up a loose ball when Scott Crichton forced Bronco quarterback Grant Hedrick to fumble the ball in his own end-zone, and another, when Larry Scott forced Troy Ware to cough up the ball after a reception, and took both of them to the end zone for touchdowns. The second was possibly a 10 point play, given that Boise St. was in field goal range when it happened.

Toss in a 4th down stop on 4th and 1 on their own 10 yard ling on the second play of the 4th quarter, and the Oregon St. defense accounted for at a minimum a 20 point swing in the game, more than the margin of the game.

Good thing for the Beavers too, as it wasn't a perfect night by the defense by a large margin; Boise St. rolled up 537 yards, including 382 yards passing by Hedrick, who went the distance at quarterback for the Broncos, after Joe Southwick was sent home last week for allegedly urinating off a hotel balcony.

And even with the Bronco rushing game rendered relatively irrelevant by falling 2 touchdowns behind in the first quarter, Jay Ajayi still rolled up 97 yards on 23 carries.

The perpetual problem of breakdowns in the form of the lack of safety coverage over the top continued to plague the Oregon St. secondary, including a Hawaii Bowl game record long 85 yard scoring strike from Hedrick to Matt Miller early in the 4th quarter. But after that, the Beaver defense tightened things up, allowing only a field goal the rest of the way.

Given that Brandin Cooks, Sean Mannion, Storm Woods, and Terron Ward were all having great nights for the Oregon St. offense, it was more than enough to sew up a 7-6 record that secured a second consecutive winning season, and break the Beavers' 2 game bowl losing streak as well as a 5 game losing streak down the stretch this season. 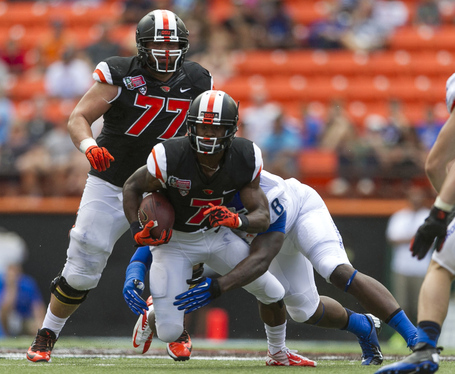 Cooks, above (photo via cdn1.sbnation.com) set the tone early, with 50 yards and 2 first downs in the first 3 plays of the game, and a touchdown catch of a dart of a ball Mannion delivered through quadruple coverage on Oregon St.'s second drive of the game, for their first touchdown. Cooks would finish with 60 yards on 8 receptions, but it was enough to make him the all-time Pac-12 single season leader in receptions, with 128, and receiving yards, with 1,730, surpassing records established by USC's Marquise Lee. 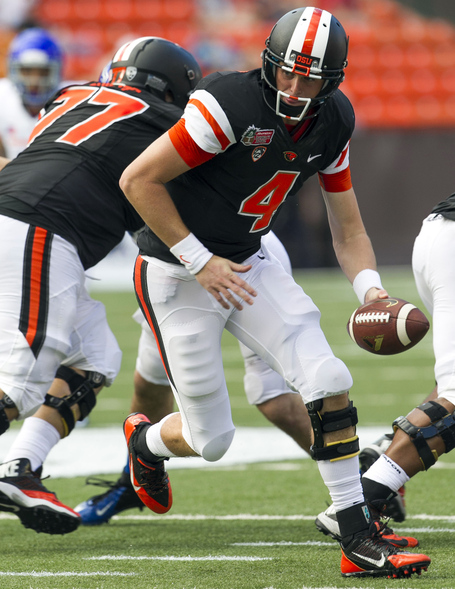 Mannion, above (photo via cdn2.sbnation.com), finished having completed 24 of 33 passes, for 259 yards, and the 1 touchdown, but wasn't sacked all afternoon, and only threw 1 interception, on a throw-away play at the end of the first half, when there was nothing to lose. Hedrick in contrast was sacked 5 times by the Oregon St. defense.

Woods had his best day of the season, rushing for 108 yards and a touchdown on 16 carries, and adding 21 more on 2 catches.

The game started off looking like the close contest most predicted, as Oregon St. picked up 3 first downs on the first 3 plays of the game, but after the next 3 plays didn't work, had to settle for a 27 yard Trevor Romaine field goal, and Boise St. answered by capitalizing on another episode of no Oregon St. safety deep to march deep into Beaver territory themselves.

The Oregon St. defense stiffened as Boise St.'s had though, forcing the Broncos to settle for a 24 yard Dan Goodale field goal.

Mannion immediately marched the Beavers back down the field, finding Cooks in the back of the end zone for the thread the needle 2 yard touchdown to open a 10-7 lead.

And then the game changed via Reynolds.

Oregon St. appeared to have scored a safety, as Crichton was sacking Hedrick in the Bronco's end zone, but Crichton punched the ball out in the process, and it bounced out to the 3 yard line, where Reynolds found the first of his Christmas presents, scooped it up and unwrapped it in the end zone.

Hedrick marched Boise St. into range for another Goodale field goal, this time from 42 yards out, and the Bronco defense stopped Oregon St., as head coach Mike Riley opted to eschew a field goal on 4th and 2, but Tyler Anderson was stopped cold.

Hedrick completed 3 passes in a row to drive the Broncos into Beaver territory, but another ball caught by Ware was knocked loose by Scott on the tackle, and this time Reynolds had to pack the next Christmas present 70 yards before taking the bow off this one, which put the Beavers up 24-6. 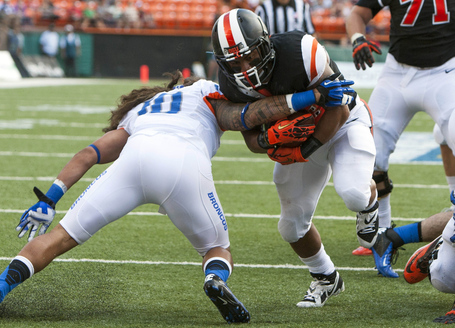 Oregon St. began really running the ball effectively, literally running through the middle quarter of the game. Ward bulldozed his way over 3 Bronco defenders for a 9 yard touchdown 3 minutes before halftime, above (photo via cdn0.sbnation.com), and Woods powered in for a 5 yard touchdown midway in the 3rd quarter behind a tremendous Sean Harlow block to put Oregon St. up 38-6.

Boise St. would battle back, with Ajayi capping the ensuing 76 yard Bronco drive, and had it not been for all the scoop and score action earlier, it would have gotten nervous as Hedrick continued to rally the Broncos.

The 6'3" Miiller was especially a problem for the smaller Oregon St. secondary, and finished with a game high 206 yards on 11 catches.

But though Oregon St. didn't score anymore after midway in the 3rd quarter, the Beavers burned off over 12 minutes in their final 4 possessions, leaving Boise St. without enough time to climb out of the first half hole turnovers had put them in, especially when the drive the Beavers stopped on their own 10 yard line didn't accomplish anything other than to run more time off the clock.

The win was Riley's 5th bowl win, and snapped a 2 game losing streak against Boise St. 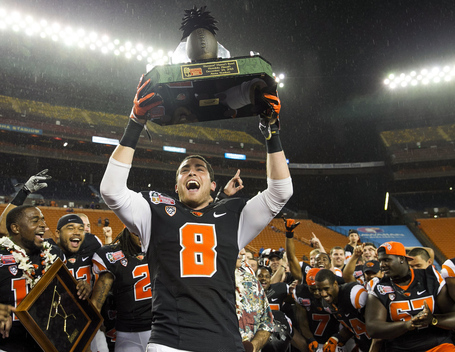 Richard Mullaney, who had 3 catches, for 52 yards, hoists the Sheraton Aloha Bowl trophy. (Photo via cdn3.sbnation.com) 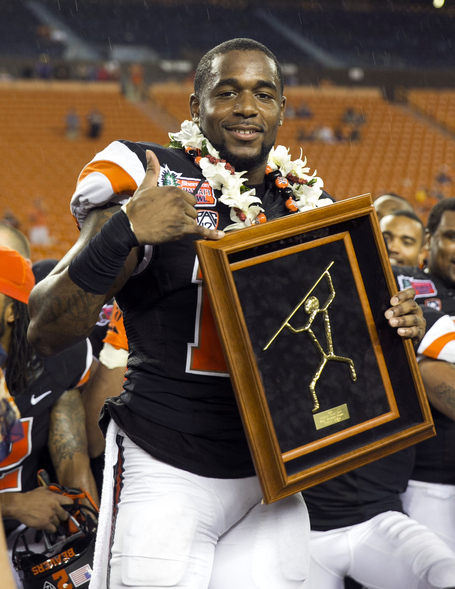 Reynolds, above, had 8 tackles and 2 assists and a deflected pass, and was named the game MVP. (Photo via cdn3.sbnation.com) 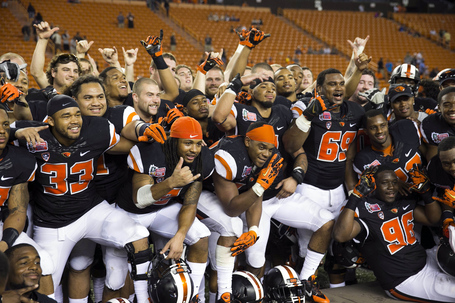 Oregon St. celebrates their win in the Sheraton Hawaii Bowl