Oregon St. got their usual 1-2 punch from Devon Collier and Roberto Nelson, and it delivered a 77-63 win over Arkansas-Pine Bluff in the oft-rescheduled contest pushed back from various times last Saturday and Sunday due to near-record snow in Corvallis, followed by bad winter weather in Texas that prevented the Golden Lions from ever getting off the ground in Dallas.

The Beavers jumped out to a 12-2 lead 3 minutes into the game, and went up 18-7 on a dunk by Nelson just over 3 minutes further into the game. It was as large as Oregon St.'s lead would get in the first half though, as Arkansas-Pine Bluff battled all the way back, taking their first lead on a Sean Tingle putback at the 5:46 mark.

The Golden Lions got their largest lead of the game, 28-25, on their next possession, but the Beavers answered with an 11-4 run to the end of the first half, taking a 36-32 lead to the locker room.

Oregon St. wasn't in sync in the first half, after a 12 day layoff, but found better rhythm after the break, pulling out to a double-digit, 48-38 lead 4 1/2 minutes into the second half, on a Collier free throw.

The lead grew to 15 a minute and a half later, on Angus Brandt's free throw, and topped out at 20 points 3 different times just past the midway mark of the second half.

Arkansas-Pine Bluff made one last charge, with a 10-2 run, but Oregon St. then took the shine off the Golden Lion rally, rebuilding the lead to as many as 17 twice, before taking the 14 point win.

Nelson led the way with a game high 26 points and 4 assists, but Collier had the dominant performance of the night, posting a 20 point and game high 10 rebound double double. Collier, below, was unstoppable inside, putting down 9 of 10 shots on the evening. 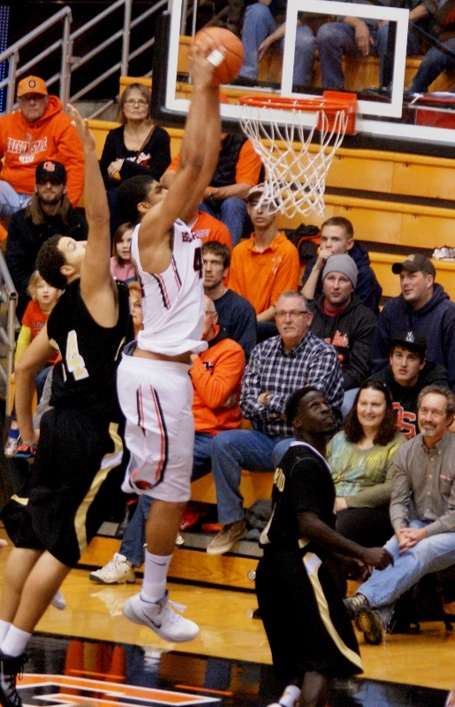 "I just think he's more efficient this year than he's ever been," Oregon St. head coach Craig Robinson said of Collier. "I think a lot of that has to be attributed to Roberto playing well at the same time. It's hard to double when you've got two guys scoring at such a high clip."

Davon Hayes led Arkansas-Pine Bluff with 18 points, on 8 of 12 shooting, and DeAndre McIntyre added 12 more, on 6 of 8 shooting.

No one else was in double digits, with Brandt coming closest, with 9 points. Brandt, below, was a perfect 3 of 3 from the field, and 3 of 4 from the line. 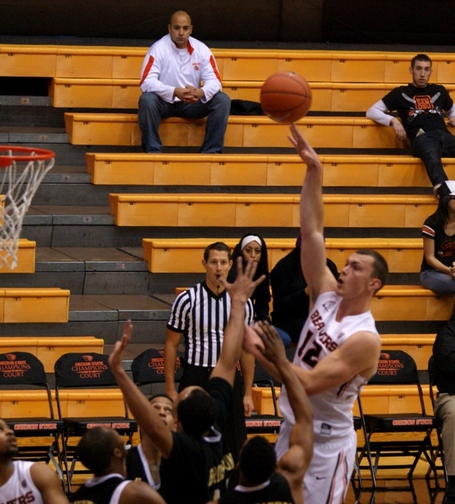 Oregon St. improved to 4-2 for the season, with Maryland-Eastern Shore (2-4) next up Sunday afternoon at 3 PM.

Arkansas-Pine Bluff fell to 2-7, after dropping their 7th game in a row.
A tiny combined crowd of 2,369, disappointing despite being at the end of finals week given that admission to either game got you the other game, and the entire campus staff could get in free on "Educator Appreciation Night" turned out for the evening's double-header, which saw the Oregon St. women improve to 6-2 for the season, after a 76-64 win over Hawaii.
The game was rather similar to the men's game in that a strong push by the Beavers after the halftime break provided the differentiation. Oregon St. pulled away to lead by as much as 17, going up 72-55 on Ali Gibson's 3 pointer with 4 minutes left, after Hawaii had played the Beavers about even in the first half, leading most of the way, until Oregon St. pulled ahead 36-32 at halftime, on back to back baskets by Weisner.

Jamie Weisner, above, led Oregon St., with 19 points, with Sydney Wiese right behind, with 17 points. Wiese, below, was red-hot, going 5 for 5 from 3 point range.

The Oregon St. women will next be in action next Thursday through Saturday in Las Vegas, in the "Duel In The Desert", with games against Creighton, UNLV, and Clemson.
Andy_Wooldridge@yahoo.com