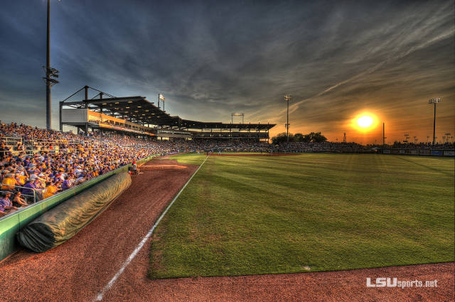 Oregon St. gets their rematch with LSU, after the Beavers beat down Lousiana-Monroe 11-2 this afternoon, behind a brilliant performance by starter Ben Wetzler.

Wetzler went 8 2/3 innings, and it would have and should have been a shutout had there not been consecutive errors that followed a leadoff walk in the 3rd inning. (Oregon St. pitching coach inexplicably pulled Wetzler an out away from a complete game, and Carlos Rodriguez's wild pitch allowed the WarHawks a second run.)

By then, Oregon St. already had 4 runs on the board, after Tyler Smith had followed up John Tommasini's RBI single with a 2 RBI single, and Michael Conforto had added another RBI single, for the first of his 4 RBIs for the day, in the bottom of the second.

Wetzler wasn't actually all that sharp at times, especially, early on, leaving 6 WarHawks on base in the first 3 innings, but worked out of trouble on numerous occasions. Three double plays by the Beaver defense was a considerable help, though Oregon St. did commit an uncharacteristic 3 errors.

Wetzler got the win after throwing 128 pitches, only 8 of which resulted in hits. Wetzler allowed just 3 walks. The victory also gives Oregon St. 40 wins for the second season in a row, and the 5th time in history. Also as a result, coach Pat Casey improved to 12-4 all time in regional and super-regional elimination games. It was Casey's 40th post-season win.

WarHawks starter Shelby Aulds didn't survive the second inning, and took the loss, dropping to 3-3 for his season. In all, Lousiana-Monroe eventually threw a half dozen pitchers at the Beavers.

The Beavers added 3 more runs in the 4th, when Tommasini led off with a walk, Max Gordon beat out a bunt, and Conforto drove them both in with a double into the right field corner. Conforto scored on Ryan Dunn's deep fly to center, after advancing on a double by Danny Hayes.

Oregon St. poured it on, with 2 more runs in the 5th, when Conforto put a ball in play with the bases loaded that resulted in an error in short right field by the UL-Monroe second baseman. Conforto got 1 RBI, but also "caused" the second run.

Another pair of runs crossed in the 7th when Smith tripled off the left field wall to score Gordon, and scored himself when Joey Matthews, who took over for Conforto to allow the Pac-12 RBI leader and Freshman of the Year to ice his sore right shin, which has been troubling him since the Stanford series.

The Beavers will be the home team tonight, despite playing in the Tigers' Den. Any advantage is important, though, as Oregon St. has to win, and LSU doesn't. If the Beavers win, the teams will play again tomorrow night at the same time, in the rubber game of the series. If the Tigers either game, they get to host a Super Regional next week.

Senior RHP Taylor Starr (5-2, 3.80 ERA) will get the start tonight, with the entire bullpen at the ready, thanks to Wetzler's tremendous performance. Starr spent the first game in the air-conditioned hotel, but in uniform, had there been a need to retrieve him for the first game.

Starr went 6 1/3 scoreless innings in beating Oregon in his last outing, his second win in 3 matchups with the Ducks.

The importance of Wetzler's bullpen preserving effort can't be understated, especially since LSU has gotten 8 inning outings from their starters in both of their wins in this weekend, and has their bullpen in great shape as well.

The Beavers will go with the same lineup as earlier today, except Ryan Gorton will catch.