The third game of the series was suspended due to darkness yesterday. It will continue with the teams tied at 12, headed to the tenth inning. Tony Bryant was the last pitcher for the Beavers, and Jeremy Peterson the last for the Gauchos. There are no probables for game 4.

Before we go into the game 2 recap, let me say this: The Beavers strike out way too much, especially for a team without much power. They've struck out 34 times over 26 innings. If the batters don't learn to make contact, this season could go downhill.

Saturday's first game was an exciting 3-2 victory for the Beavers. Cole Baylis started for the Beavers, and went 4 innings, giving up 2 runs (1 earned) on 6 hits, striking out and walking one batter. UCSB sent Kevin Gelinas out to start the game, and he threw 5 innings, surrendering 2 runs (2 earned) and 2 hits, while striking out a whopping 8 Beavers, and walking three. (Remember, this was to be a 7-inning game.)

The Gaucho's started the scoring in the 3rd, which started with a John Tommasini throwing error, allowing the runner to reach second. Baylis and the Beavers almost got out of it, as the next two batters fouled out and grounded out. Unfortunately, Marc Venning hit an RBI single with two outs to make it a 1-0 affair.

Oregon State replied in the 5th. After a one-out Kavin Keyes double, Joey Matthews and Danny Hayes were hit by pitches. Tommasini walked, forcing in a run, and Ryan Barnes hit a sacrifice fly to give the Beavers a 2-1 lead. The inning ended when Danny Hayes was caught trying to score on a pitch that got away from the catcher.

In the bottom of the 5th, UCSB's Joe Wallace tied the game with a solo home run, knocking Baylis out of the game. For the second game in a row, Matt Boyd headed to the mound.

The Beavs threatened in the 6th, having runners on first and third with nobody out. Unfortunately, Oregon State remembered that they like to strike out with RISP, so Jake Rodriguez and Dylan Davis did just that. The Beavers tried to get the runner on first, Ryan Dunn, caught in a rundown, so Tyler Smith could score from third, but Ryan Dunn was tagged too quickly, and the inning ended.

In the 7th, the Beavers made some crazy managerial moves. Boyd was replaced by Cole Brocker with two outs, but Boyd moved to first base, which eliminates the DH from the Oregon State lineup. After Brocker surrendered a single, Boyd went back in to pitch, Ryan Barnes was sent to first, and Ryan Dettman was sent to left. Boyd gave up a bunt single, and was promptly replaced by Tony Bryant. Bryant got the out needed, and the game was sent to extras.

Tommasini led off the inning with a walk, and Barnes bunted him over. Tyler Smith hit the go-ahead RBI single, and was balked over to second. After a Dunn popout, something amazing happened. Star-pitcher, Golden Spikes Watchlist Tony Bryant was at the plate. He struck out, but still, it as pretty cool.

Bryant went back out to close the game, and did so easily, allowing a leadoff single, but nothing more. 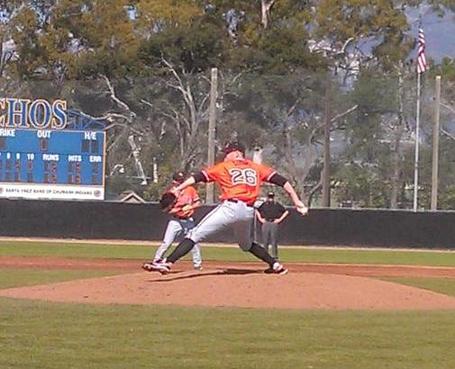 Taylor Starr, above, is back in action for the Beavers this weekend, after missing 2 years! (Photo by Josh Osich)