Bears Pull Away From Beavers

Share All sharing options for: Bears Pull Away From Beavers

California put together a pair of second half runs and pulled away from Oregon St. for a 14 point win that keeps the Golden Bears atop the Pac-12 race. The win also avenged Oregon St.'s 92-85 win earlier in the season.

The Beavers had overcome a slow start that saw the Golden Bears open a 12-0 initial lead to take a 2 point - lead at halftime, and Oregon St. was within 4 points mid-way in the second half, trailing 51-47, when California ran off 8 straight points, the last 5 of which were by the Golden Bears' senior guard Jorge Gutierrez, and appeared to have broken the game open.

But the Beavers' 1-3-1 defense, which had been the most effective of their 3, and had sparked the first half rally, came through again, and Oregon St. battled back to within 62-56.

The Golden Bears answered once again, with a 7-0 run, to take a 69-56 lead. The Bears weren't through either, and the run would eventually reach 12-2, allowing Stanford coach Mike Montgomery to bring his other senior Harper Kamp, who finished with 13 points, out of the game to a standing ovation from the sell-out crowd at Haas Pavilion on senior night, and then seconds later, with the crowd roaring "Ole Jorje", Gutierrez, who finished with a co-game high 17 points, got his send-off.

California continually rotated the defensive assignment on Oregon St.'s Jared Cunningham through several players, and it was an effective move. Cunningham was held to 10 points, and didn't reach double figures until he hit a 3 pointer with 5:26 to go. It was the basket that made it a 2 possession just before California erupted with their decisive stretch run. Cunningham's streak of 28 consecutive games with a steal come to an end.

Another impressive piece of unexpected strategy by Montgomery was the Bear's use of the triangle and 2 defense, in addition to some straight 2-3 zone. 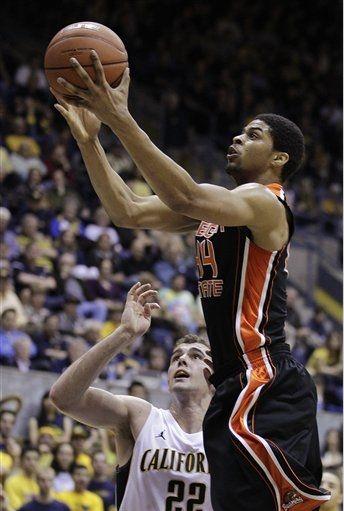 Devon Collier, above scoring against Kamp, and Roberto Nelson off the bench led Oregon St, with 14 points apiece, and Angus Brandt was also in double figures, with 11 points. Collier posted a double double, with a game high 11 rebounds.

California freshman David Kravish showed that he's been paying close attention to Kamp, and looked a lot like the Bears' elder statesman, causing considerable trouble for the Beavers in the process. Kravish made 8 of 12 shots, and his 17 points co-lead the scoring with Gutierrez.

Justin Cobbs posted a double double for the Bears, with 10 points and 13 assists, which contributed to a critical 19-10 advantage over the Beavers in assists. Allen Crabbe added 16 points and 8 rebounds, as California got double digit scoring from each of their starters, and distributed the rebounding load across the lineup.

Two major problems for Oregon St. were the (lack of) performances by Eric Moreland and Ahmad Starks. Moreland picked up 2 fouls in less than 2 minutes at the start of the game, and then suffered his 3rd personal in the first minute of the second half. Moreland missed a couple of short-range shots too hard off the back rim, and finished with just 1 point and 2 rebounds in only 12 minutes.

Starks was held scoreless until there was only 3:07 left in the game, and that basket represented his only points.

"The backcourt being outplayed like that hasn't happened all season that I can remember," Oregon St. coach Craig Robinson said.

Robinson also started freshman Challe Barton in place of Starks to begin the second half, in an unsuccessful search for perimeter production.

Joe Burton sparked the rally from Oregon St.'s initial offensive non-start with a pair of assists, but did next to nothing the rest of the way.

California hit 50% of their shots, while Oregon St. was only 38.5% from the field, after shooting 47% in the first half.

"We would get stops, but wouldn't come up with the rebound or the loose ball," Robinson noted. "Of late, that has been a problem, and I've got to address that."

Half the difference in the game came at the free throw line, where California made more shots than Oregon St. even took. The Bears knocked down 17 of 23 at the line, 74%, while the Beavers only got to the line 16 times, making 10.

California (21-6, 11-3) held onto a share of first place in the Pac-12 with Washington (18-8, 11-3), after the Huskies defeated Arizona 79-70, in a game Washington had only 5 turnovers. The Golden Bears hold the tie-breaker, however, having beating the Huskies head to head.

"I thought tonight we took a step back,'' said Robinson; "I was really disappointed."

The Beavers return home for the final 3 games of the regular season, and will face Oregon (18-8, 9-5) next Sunday afternoon, after a week's time to recover from their second consecutive week of getting swept, and having lost 5 of their last 6 games.

"We've got three home games which are all potentially winnable games," Robinson said. "We have to rise to the occasion to salvage some of this conference season."