Same teams, different location, same outcome. Again when the Beavers need a big bucket on the road no one can come through and the Stanford Cardinal prevail. This game can be simplified to three sections, the first half where neither team could pull away, the early second half where OSU could not hold onto the ball, and the final flurry where the Beavs would not go quietly.

No one player stood out for the game, several made plays at various points in the game, but the Beavs were led in scoring by Jared Cunningham with 22 points on the night, with Roberto Nelson right behind him with 19 points. The Beavs were led in rebounds by Eric Moreland and Joe Burton, who ended up tied with 8. That only left 4 rebounds for the rest of the team, as the Beavs only gathered 20 rebounds, which was dwarfed by Stanford's final total of 33 rebounds.

The first half was highly contested as both teams could not pull away from each other. The Beavs never led by more than 2 points and Stanford led by 7 once. Stanford took an early lead on a series of uncontested threes, several shot by Chasson Randle of Stanford, who ended up 6 of 7 for threes. Roberto Nelson would catch fire though and help keep the Beavs in it with 15 points off the bench on 5 of 6 shooting for the half. The Beavs would close the half strong to end up with a one point lead going into the half, but that would be short-lived.

To start the second half things continued with more of the same, the game continued to be close until the Beavs started turning the ball over, where they had actually turned the ball over 4 out of 5 possessions. It took that one streak to help propel a 5 minute drought where the Beavs fell behind by ten. After that it was a struggle where they would get close but never completely catch help. The Beavs had caught up on a series of steals and they had a chance to tie it up when a flagrant foul was called against Stanford with the score at 56-52 Stanford. Then Cunningham missed the second free throw, the Beavs failed to score on the next possession and Stanford scored which started another Stanford run.

The Cardinal refused to put away the game despite all the opportunities they were given and the lead hovered around 10 points. The Beavs started to close in the final couple minutes, hitting some big threes while Stanford missed a handful of free throws, allowing the Beavs to creep back into it. They would get it down to 85-82, but Stanford held on.

There was a play during the late portion of the game where Jared dunked but it hit him and came back out of the hoop, that basket would have brought the score to 77-74, which would have drastically changed the endgame. Mike Parker was convinced that it should have counted, but thanks to the game not being televised we won't know if it was the right call. Although to be honest, if I have to pick between the reasoning of a referee or Mike Parker, I'll trust the referee, so the call was probably a nonfactor.

No Beaver player was outstanding tonight, Moreland was a solid presence in the interior, Jared scored well but shot a low percentage. Roberto started well but could not hit a shot in the second half, in fact he did not hit one until late in the endgame. Burton turned over the ball 5 times, he has really been struggling as of late and it was not corrected in this game. Ahmad Starks had an off-night, but was aware of this and took less shots and looked to pass more often. Devon Collier quietly scored 13 points, but only brought in one rebound. Kevin McShane and Challe Barton saw some minutes but were essentially nonfactors.

With the season sweep, Stanford coach Johnny Dawkins moved back ahead of Oregon St. coach Craig Robinson 6-5 in the 4 years they have been facing each other. 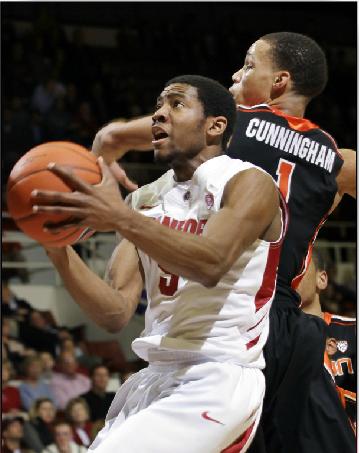 Chasson Randle (5) topped him, posting a game high, and his season

high, total of 24 points to lead the Cardinal past the Beavers.

The final thought about this game is that OSU failed again to beat a very beatable team, and have now lost 3 games in a row, and 4 of the last 5. They got all the help they needed, but they just could not score when they needed it the most. It's the story of this season so far but hopefully the Beavs can keep up the energy when they go up against the conference leading Golden Bears of California this Saturday.