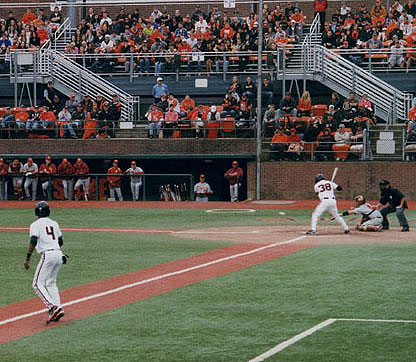 There is some sun at last, well at least in California where the Beavs will be traveling to for their opening series against UC Santa Barbara beginning this Friday. Yes that's right this Friday! After another long off-season we are diving fast back into Oregon State baseball!

The Beavs open a four game series against UC Santa Barbara then go to San Diego to play Pacific, San Diego State, San Diego, and Kansas State. From San Diego the team continues to hit the road and is headed Arizona for the Coca-Cola Classic. The team's home opening series begins March 9th against West Virginia, which is part of the Nike Showcase where the Beavs will also play Illinois, Connecticut, and Oklahoma. Finally in just little over a month the Beavs have their conference opener against Cal starting March 16th in Berkeley.

The season has kind-of sneaked up on me in many ways. It has been in the back of my mind for sure but it also has been a bit of a quiet build up. That said though it sure hit me that we almost upon another exciting baseball run when I recently saw the OSU site clicker at only 6 days left!

To build up some more excitement here are some stories about this season's team and after the break I have my own preview of what I will be looking for in the 2012 OSU baseball campaign.

And an opening day of practice video:

This will be horribly sports writer cliché but going into this 2012 Oregon State baseball season we are staring a lot of unknowns in the face with this team. There are some returning starters, there are some areas where departures have left question marks, and as always expectations for a Pat Casey team are high. Even though the team went to the Super-Regionals and ended the season at 41-19 the team is coming into the season with a bit of an underdog theme:

"It's the same as last year,'' pitcher Tony Bryant said. "We kind of think of ourselves as underdogs. ... We're not where we want to be at the end of the season. I feel like we're still underdogs and have to earn our spot and prove to the world once again that we're going to be tough this year and that we're the real deal.'' (Oregon Live)

To break down some of my own expectations I see these key areas of question: Defense and Pitching, Offensive Leadership, Replacement of Key Skill Positions, and Pac Conference Title Chances.

I'm sure I am leaving out some important areas and hope that others will weigh in with their thoughts, analysis, and opinions!

On the defensive side of things I really think we will be fine once again. There is enough on-the-field leadership carrying over from last season with players such as Danny Hayes, Ryan Barnes, Ryan Dunn, Jake Rodriguez, and Kavin Keyes creating a fairly strong infield core. [My Addition after the first game: And we will also need to count in John Tommasini who is returning after sitting out a redshirt year last season.] This core will help to offset some of the concerns/questions surrounding possibly seeing young and inexperienced players step into the field. One area though that I feel is a pretty big question mark is the outfield, but more about that in the Replacement of Key Skill Positions discussion below.

"We feel good about the experience in the infield," Casey says. (Portland Tribune)

As for pitching we are going to miss such players as Sam Gaviglio and Josh Osich, but at the same time with the return of Tony Bryant, Matt Boyd, Scott Schultz, and Ben Wetzler I also feel good about bringing back a strong core here. But I do think there are two interesting and important sub-areas within this pitching question: 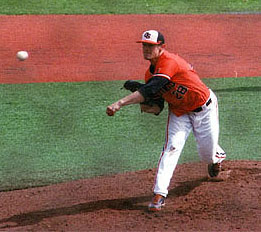 In the past I have focused on two key areas that were separated out into offense and overall team leadership, but this season I feel that these two areas really need to blend into each other. Why I see them needing to combine this season is that in my opinion one of key areas lacking since the Omaha runs has been a true energizing leader at the plate and on the bases. I hold with Coach Casey's tradition that this not translate into the need for a true power hitter, but I do feel there needs to be that leadership of someone who can do two things: 1) consistently get on base and make the small ball approach work with their smart and aggressive base running, and 2) consistently get those timely and important hits. 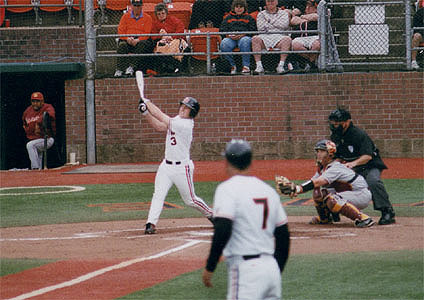 Last season we had an aggressive base runner in Brian Stamps and freshman Kavin Keyes at times was that go to hitter. But Stamps is gone and overall last season there was not any consistency of timely hitting by anyone. One has to just look at the Super Regional against Vanderbilt for an example of this where the Beavs had their chances to keep the games in range or even take leads, but could not follow through and this then had a snowball effect that sent Vandy to College World Series.

I fully expect Keyes to continue to be a very good hitter and think he has the potential to fill this need for consistent timely hits, but at the same time I wonder if during conference play that opposing bullpens will have a better idea of how to handle him at the plate. As such I think it is going to be important to have someone else step up. Of the returning players I would love to see Danny Hayes find his swing again and for Ryan Dunn and Ryan Barnes to build on their glimpses of strong hitting we saw last year. I know last season there was this full team leadership aesthetic and attitude, but once again I come back to how in previous CWS runs we had those one or two really strong personalities. I would love to see this happen again.

In general I am confident that the pitching and defensive side of things will be solid once again, but think for a strong run this year we need to see more aggressiveness at the plate.

This area really builds on the areas mentioned above about offense and individual leadership. Pitching and defense seems to be in a good place for the most part, but to me there are couple areas of concern.

The first area of concern is the empty spot at catcher caused by Andrew Susac's and Parker Berberet's departures after last year. At the core of any championship team there needs to be a strong presence behind the plate on defense. Additionally important for this position is the need for a strong batter when the Beavs are on offense (playing into my concern above about Offensive Leadership). As it looks now senior Ryan Gorton is going to be the main person back there. Gorton seems to have a good head about him on defense, but I do not know what Gorton brings to the offensive side of things. A problem here too is that Gorton is out the first five games for what Coach Casey has described as "a ticky-tack NCAA violation." As such Jake Rodriguez will be starting the season behind the plate for the Beavs. We also have freshman Nate Esposito coming into the program with some catching experience. Esposito looks to be a possible go to player here. Again I think this position needs to be firmly in place for the team on both sides of the ball and I fully expect that Esposito and Rodriguez will play some role here.

The other area that right now seems to be a little lacking is the outfield. The team lost players such as Michael Miller, Jared Norris, and Brian Stamps. Miller and Norris both at times brought some senior leadership to the team. Stamps brought his awesome field play and on the bases speed. We have Max Gordon returning (but Gordon is also out the first five games for the same violation as Ryan Gorton), and it looks like maybe Ryan Barnes will be playing in the outfield a bit. But really the other players marked to play OF are young and/or inexperienced. Freshman Michael Conforto and transfer Joey Matthews both seem to be on coach Pat Bailey's radar to be a factor if not starters. And just who are freshman Jordan Dunatov, Spencer Ellsbury, Ryan Howell, and Spencer Manjarrez and is there a Kavin Keyes in this group ready to hit the ground running in college play?

To expand upon my questions above here is an interview with Oregon State assistant coach Pat Bailey:

Last season the Beavs had a great shot at winning the conference with ASU struggling down the stretch and UCLA opening their conference play weakly. But the Beavs quite honestly just plain tanked at the end of conference play. The team still had a decent run in the post-season, but not winning the conference last year did cost the team a home field advantage for the Super-Regionals. With a non-conference season that is both a nice challenge as well as one that is there for the taking in terms of a good record the Beavs should come into the Pac play ready to go.

"We feel like we're going to be a better team 15 games into the season than we are early," Casey says. "We'll have to defend and execute with the offense to have success." (Portland Tribune)

It will be important for the team to make a strong run at the title again. But again this year the Pac is an interesting conference with a good number of teams in the hunt for the title. At the same time, once again, no one team is necessarily standing out as a clear frontrunner. Of course UCLA and Arizona State are part of the conversation, as well as Stanford (preseason ranked #2), Arizona, Oregon, and California. Throw into the mix newcomer Utah and teams like Washington, USC, and Washington State who are not expected to be top tier teams but at the same time can always make things difficult (OSU plays at LA and Pullman and both are tough road venues). As I observed last year it is going to be again a fascinating conference season.

That all said I have no reason to think that Oregon State will not be once again in the mix and fully expect them to be. 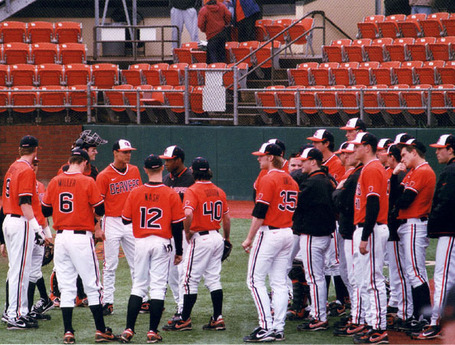 As I mentioned at the outset this 2012 baseball season has snuck up on me a bit. But with the terrible football season and the ups and downs of the men's basketball season I'm more than ready to have the sun come out and take my kids to some good old fashion Corvallis All-American baseball tradition. Heck I'm even ready to sit through some rain at Goss Stadium! I think there are some holes to be filled and questions to be answered, but at the same time I see a team that is returning some top-notch talent and has a strong recruiting class coming in. Coach Casey has once again decided to come back after his annual tease of us about retirement and as such I expect nothing less than some sunny and rainy OSU baseball success this year!