Share All sharing options for: Oregon St. Good And Lucky

It's an age old debate; is it better to be good or lucky? Saturday night, Oregon St. demonstrated that some of both usually come into play when special seasons are in the making. The Beavers got off to their second only 6-0 start to a season, matching that of the 1907 squad, with a 21-7 Homecoming win over Utah on Blackout Saturday night, and it came down to Ute turnovers, especially a pair of them that occurred within a couple of minutes of each other late in the first quarter and early in the second period. 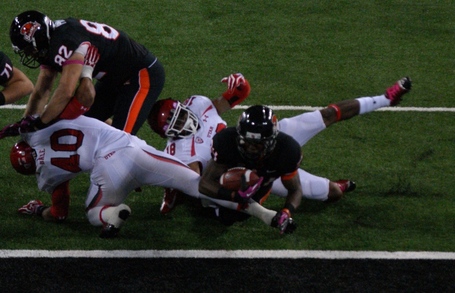 They both led directly to short fields, and Storm Woods touchdowns, including the game's first score, above, that capped 2 play drives. The other pair were also crucial to the outcome, one costing Utah a scoring opportunity, when DeVonte Christopher couldn't handle a wet ball on a pitch when the Utes were looking to tie the game, and the other effectively ending the game, which gave the Beavers 1 more interception than in all of last season.

If you lose the turnover battle 4-0 as Utah did, you tend to also lose the game, and render all other statistics, which including out-rushing and almost out-passing Oregon St., aw well as out-possessing the Beavers by nearly 9 minutes, and story lines, irrelevant to the outcome.

Which is not to say there aren't other worthwhile story lines that came out of the game, which is where both luck and good defense come in. 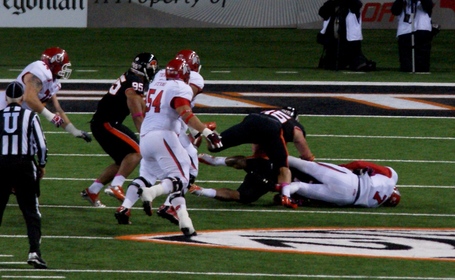 Two of Utah's turnovers, the fumble that quarterback Travis Wilson suffered when Rudolph Fifta ran over him, above, like a stampeding rhinoceros on the first play of the second quarter, and Sean Martin's interception that ended the Ute's second consecutive 4th quarter drive into Oregon St. territory, can be credited to the Oregon St. defense's solid play. 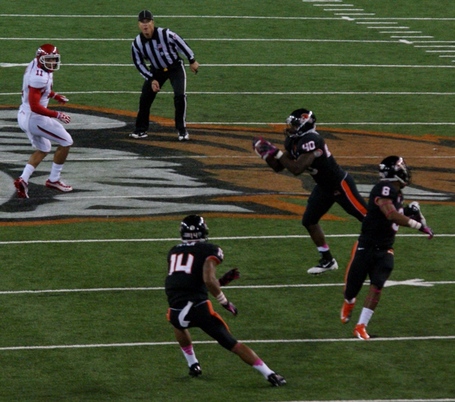 But the others were a matter of luck, and Christopher's inability to execute (Michael Doctor's "look what I found" interception, above, that set up the game's first score came on a ball Christopher volleyballed up in the air, below) on what has to have been the single worst game of his career. 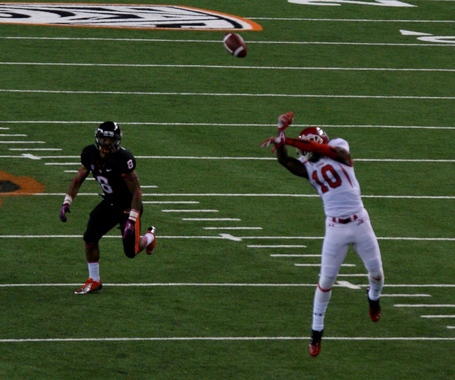 Oregon St.'s defense has been the reason the Beavers have won all 3 of their home games, as the Beavers have allowed only 20 points, and just 2 touchdowns, so far at Reser. That's been great timing, given that the offense has surprisingly played their 3 least productive games in the home games, saving their best for the road, where the defense has predictably had a harder time. 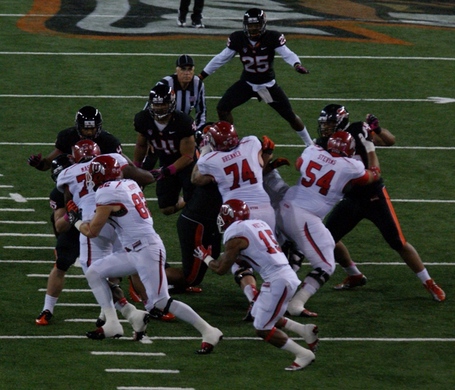 But it wasn't as though the defensive effort was perfect, even though they contained Utah's John White IV, above, to just 68 yards rushing, on 20 carries, and 24 more on a couple of catches. It was a considerable improvement over last year, when White gashed the Oregon St. defense for 205 yards and a touchdown in last year's 27-8 Ute win. 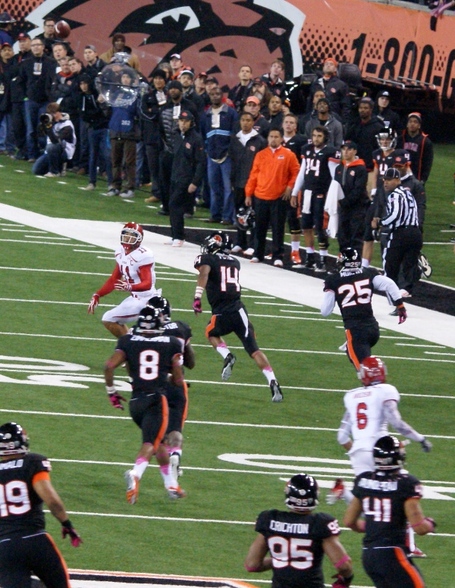 Right off the bat, Luke Matthews got behind the Oregon St. secondary, above, and Beavers head coach Mike Riley, in the background, knew that was a problem.

Taking close look at Doctor's interception reveals that Matthews was again loose behind the secondary, with no one but the back judge in position to defend him.

But it's also worth noting that Matthews and tight end Jake Murphy, below scoring Utah's only touchdown, are both "#2s" on the Ute's depth chart. 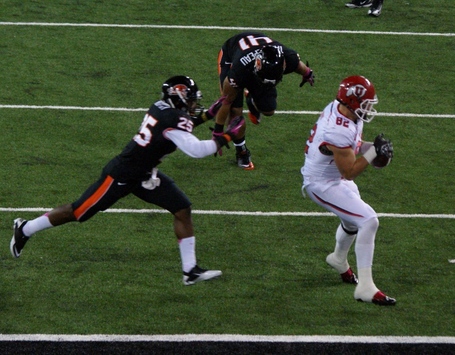 Two names conspicuously absent from the receiving section of the final stats are those of Christopher and Dres Anderson. Both had touchdowns in the Ute's win last year, and as a pair, they are capable of rivaling the best pairs of receivers in the country, never mind the conference. And both were without a catch this time against Oregon St.

When an opposing offense's leading receivers are second stringers, the defense has done something right.

"They really beat us up last year on both sides of the ball," Riley noted. "Our kids did a much better job of protecting and the best thing about a tight game like this one was our turnovers."

It's also worth noting that Utah only mounted one sustained long distance drive, the 88 yarder for their second quarter score. 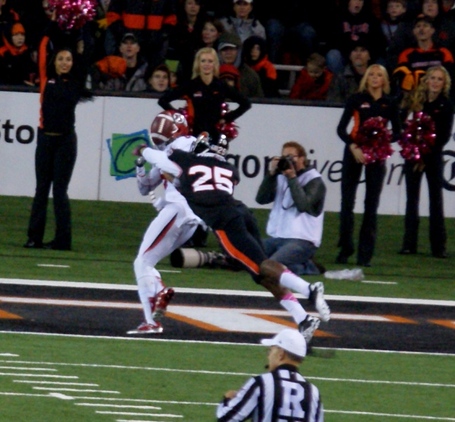 The defense's player of the game might just Ryan Murphy, above, who had his best career day defending the pass, and delivered multiple big hits that you will probably see again on pre-game promos.

Why the Beavers' offense has consistently struggled at Reser compared to on the road, where you would expect things to be more difficult, is something of a mystery. But with potentially 3 consecutive home games at the end of the season, and 4 out of 5 at home after next week's venture to Seattle to play Washington, its something Riley would do well to resolve.

Riley made a commitment to try to run the ball against Utah's intimidating front line of Star Lotulelei and the Kruger brothers, but though Woods got the 3 touchdowns, he managed only 47 yards on 17 carries, and the Beavers only totaled 53 on the ground. And that's with only 1 sack of Cody Vaz counting against them. 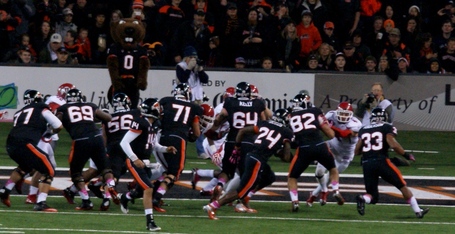 The second scoring play, above, where Oregon St. had 7 blockers against only 6 Utah defenders, creating a wall even Benny had to stretch to see over, was the exception, not the norm.

And while both Anderson and Christopher largely disappeared, so too did Oregon St.'s Brandon Cooks, who was second in the nation in receiving yards per game coning into the night. 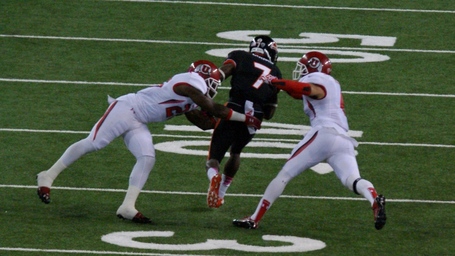 When Cooks, above, had only 1 catch, and just 3 touches (Cooks had more rushing yards than the 8 he had receiving), it had many openly wondering if play calling had been handed back over to offensive coordinator Danny Langsdorf, and Riley acknowledged at half-time he needed to try to open things up more. 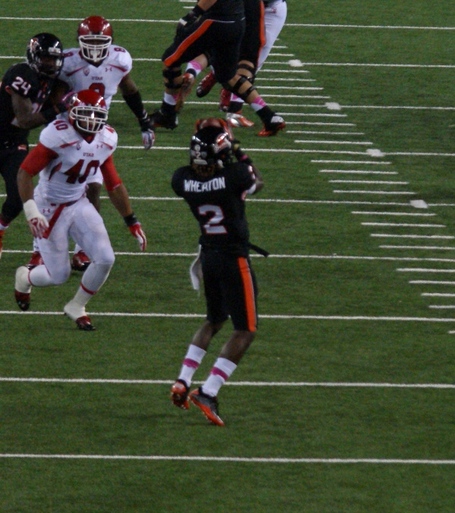 Fortunately for Oregon St., while 3 receivers with potential all-conference, and probably eventually professional, credentials were struggling, the one who might be the best of the lot didn't. Markus Wheaton, above, had a game high 7 catches, for a game high 90 yards, and each catch seemed vital to maintaining any measure of momentum for the Beavers. 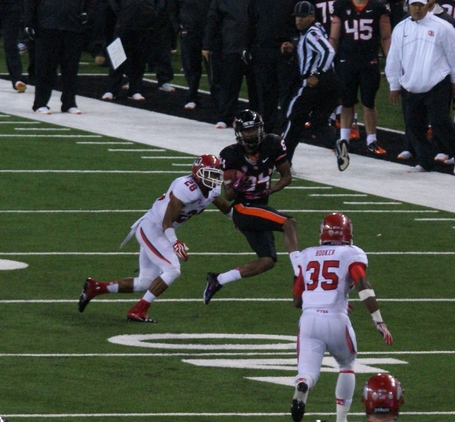 Riley does get credit for the call of the game, sending often overlooked Kevin Cummings across the secondary on a mid-level crossing route, above, for a 25 yard gain on a 1st and 25 situation, after a dubious personal foul call for a blocking infraction had backed the Beavers up inside their own 20 yard line.

It sparked the 4th quarter scoring drive that put the game out of reach. And while the drive was aided by a personal foul on Utah for helmet to helmet contact, ironically on another catch by Cummings, even on a day the offense sputtered, it was another clutch 4 quarter drive by Vaz, and the offense, which has delivered when needed under such circumstances time and again this season. 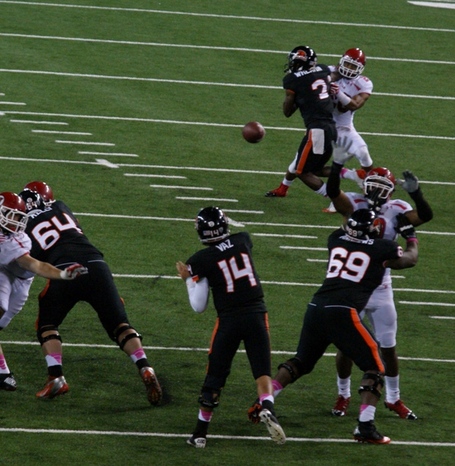 With Sean Mannion possibly set to make his return from labrum cleanup surgery following the Washington St. win, it's possible we've already seen the last of Vaz, above. If Sean is indeed ready to return, he could stay healthy for the rest of this year and next, and Cody could spend his last season and a half at Oregon St., standing on the sideline at the ready.

But even if he never gets to take another snap, Beaver Nation will forever remember him. How many reserves come in against 2 of the better defenses around, and not only win both games, but don't turnover the ball, even once? 3 sacks, no fumbles lost, and no interceptions is a simply remarkable stat line that Vaz has posted. 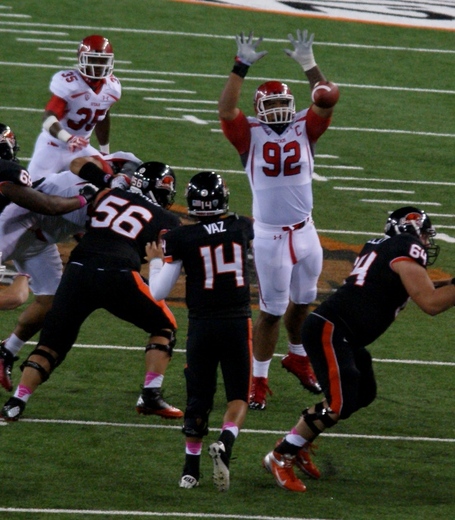 Vaz did have a bit of trouble with balls being batted down again, but take a look at what he was looking at in Lotulelei, above, who will probably be a top 5 NFL pick this spring, and you can see why. To Vaz's credit, as the game proceeded, he adjusted with several short darts thrown to backs on short routes when better targets weren't available.

Vaz completed 16 of 26 passes, for 174 yards, surpassing slightly Wilson, who was also making his second career start. Wilson had 15 completions on 28 attempts, for 172 yards. But Wilson also had the pair of interceptions, plus a fumble lost, and multiple sacks.

Oregon St. also became bowl eligible, and at the earliest date in history. 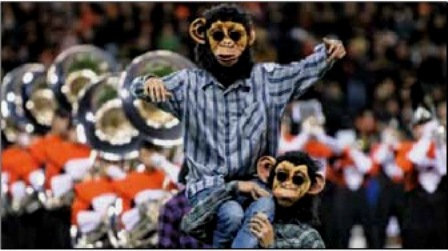 After a chilly, but dry first half, and an entertaining halftime show where the OSU Marching Band was joined by some friendly guests, above (photo by Vinay Bikkina, The Daily Barometer), a cold rain moved in during the second half, slowing the offenses, and sending some of the crowd of 45,769, 5th largest in Reser Stadium history, to the exits early, but it was still a great night to be a Beaver.

"It is an exciting time, and I really appreciated the awesome crowd," Riley said. "It was just electric out there. It was one of the neatest nights, and we appreciate that support."