Share All sharing options for: Utes Get First Pac-12 Win Over Over-Matched Beavers

Utah got their first Pac-12 win Saturday evening, a 27-8 victory over an over-matched and under-prepared Oregon St. team in front of a crown of 45,017 on "Blackout" night in Salt Lake City.

The Utes whipped the Beavers in all phases of the game, and they did it both mentally and physically. Which was especially remarkable given Utah coach Kyle Whittingham's proclaiming the game to be Utah's worst of the season.

The most obvious problem was a major regression by Oregon St.'s redshirt freshman quarterback Sean Mannion, who consistently missed his reads, and appeared completely overwhelmed by the Utah defense. After a few decent plays early in the game, the continuing array of alignments, blitz schemes, spacing, and coverages seemed to produce sensory overload in Mannion. The results were missing open receivers, throwing into coverage, 3 interceptions, checking down into the very throws Utah wanted him to make, and off-target throws.

Several dropped passes, including one by Marcus Wheaton that would have produced a first quarter touchdown, and injuries to right guard Burke Ellis and center Grant Johnson didn't help either.

A below average Beaver running game that managed only 92 yards before the 60 yards Mannion lost on sacks was subtracted didn't give Mannion many options once the Utes leaped way ahead with three touchdowns in the second quarter. Malcolm Agnew only picked up 26 yards on 9 carries, and also fumbled at the goal line in the fourth quarter, derailing Oregon St.'s attempt at a rally after Andrew Seumalo had covered White's fumble at the Utah 12 yard line. Terron Ward was only able to add 21 yards. 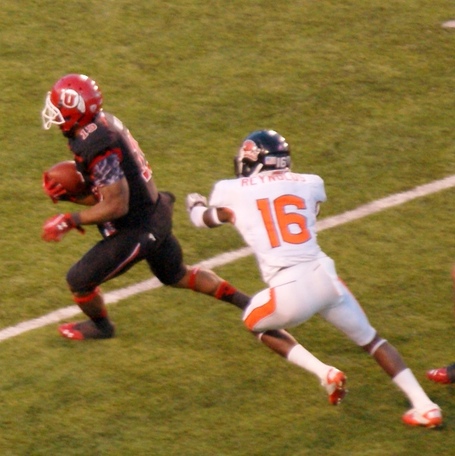 Meanwhile, Utah's John White IV, above, was busy posting a career night, rushing for 205 yards, 151 in the first half, and a touchdown, plus setting up another with a 60 yard bolt.

White's production allowed Utah to win despite Jon Hays completing only 6 passes, for 62 yards, 35 of which came on the Ute's first touchdown, to Dres Anderson, who burned Rashaad Reynolds, below, for an uncontested catch. 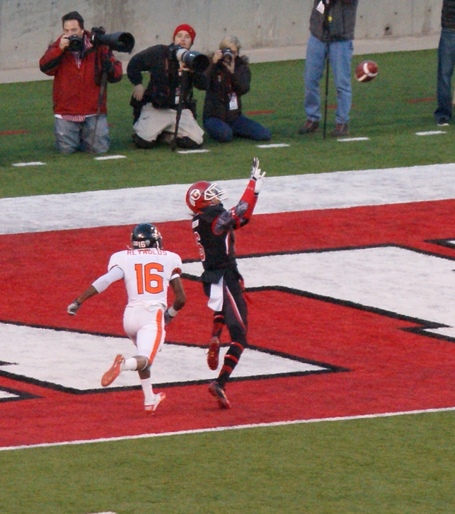 Oregon St. did manage to surprise Whittingham, however, by ignoring the proven strategy to beat Utah, loading the box defensively, forcing Hays to beat them.

"It completely surprised me," Whittingham said. "Everyone who had defeated us has done everything to take John (White IV) away. The teams that didn't lost."

Evidently Oregon St. defensive coach Mark Banker's pre-planning based on prior games was as deficient as his preparation for gap control and containment.

Oregon St. middle linebacker, Tony Wilson, who again started in place of the injured Feti Unga, initially over-reacted on a regular basis to the initial moves of the Utah guard and tackle, especially on the strong side. Wilson was replaced by Reuben Robinson before halftime, though it was unclear if it was in response to Wilson's play of a possible injury, as Wilson was no where to be seen in the second half.

Bad tackling by the Beavers (which would seem to be a coaching problem this late in the season) and Hays' limited throws (he only put the ball up 14 times) effectively distracted attention from the ineffectiveness of the coverage schemes on a number of situations, from the initial score, where Reynolds was left in single coverage against a receiver he physically couldn't handle, to the hopeless defensive coverage scheme that failed to prevent the Ute's third score, to DeVonte Christopher just 24 seconds before halftime.

After falling behind 24-0 at the half, the Beaver defense did make some halftime adjustments that slowed the Ute's offense considerably, but the adjustments came too late. Especially given that the Oregon St. offense would continue to be mostly inert.

Mannion particularly struggled with pre-snap reads, and never could recognize what Utah's defensive ends and linebackers were up to. And Mannion only got the ball to TE Joe Halahuni, who was the obvious counter-move to the aggressive linebacker play of the Utah linebackers, one time.

Oregon St. coach Mike Riley however stuck with the confused Mannion, who did eventually find Wheaton for a touchdown, and throw for 231 yards, rather than switch to Ryan Katz.

The move removed any lingering doubt that Riley had discarded any chance for success this season last September when he made the clumsy switch to Mannion, focusing instead solely on trying to develop young players for next season.

Multiple illegal procedures compounded Oregon St.'s problems as well. The apparent lack of an effective silent count package when backed up into the enclosed end of the horseshoe-like Rice-Eccles Stadium, and a couple more false starts by Mike Remmers, in short yardage situations, were drive killers.

Mannion's fourth quarter interception was a direct product of the passing situation a Remmers false start on a second and one situation created. How the continuing problems the Oregon St. offensive line is having haven't been corrected is an inexplicable as they are maddening.

The problems with the Oregon St. offense, defense, and Trevor Romaine's missed 50 yard first quarter field goal, overshadowed a tremendous performance by Beavers' punter Johnny Hekkar. Hekkar turned in punts of 47, 50, 53, 69, and 58 yards, plus one for [only] 43, but which Jordan Poyer downed at the Utah 3 yard line.

Punting was a strength for both teams, as Utah's Sean Sellwood and Nick Marsh combined to force Poyer into 6 fair catches, 4 of them at or inside Oregon St.'s 20 yard line.