Bears Trample Beavers On Their Way To A Bowl

Share All sharing options for: Bears Trample Beavers On Their Way To A Bowl

California overcame a rash of penalties on their offensive line to put an end to a 4 year run of frustration against Oregon St., and become bowl eligible as well. The Golden Bears' Isi Sofele ran wild against the Beavers, piling up 190 yards and scoring a touchdown on 23 carries. This despite having a long touchdown called back due to a holding penalty.

And it wasn't just Sofele who tore up the hapless Oregon St. run defense; C.J. Anderson added another 96 yards on 14 carries, and California piled up a total of 296 rushing yards.

Meanwhile, the Beavers tried only 17 rushing plays (Sean Mannion's 4 sacks weren't intentional), which accumulated only 48 yards (before Mannion's -21 reduced the net total to 27).

Despite a disappointingly sparse turnout, the Golden Bears celebrated senior day by doing what they needed to, other than the penalties, while the Beavers played poor fundamental football, and squandered numerous opportunities.

Oregon St. started strong, driving deep into California territory. But on 3rd. and 14, Mannion threw a 2 yard pass, and the Beavers had to settle for a Trevor Romaine field goal, and a 3-0 lead.

California quarterback Zach Maynard's evening started with a completion, but he followed that up with an incompletion, and then a interception, picked off by Lance Mitchell. Maynard, below, would settle down after that, as he completed 12 of the 15 passes he attempted the rest of the game. 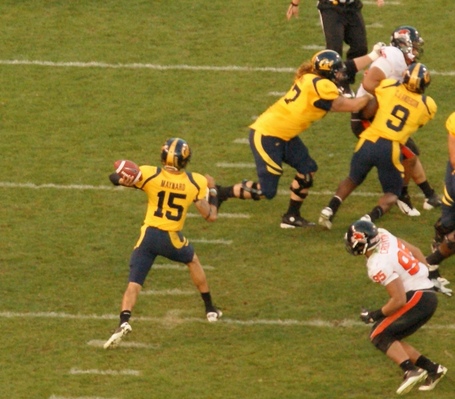 The Beavers couldn't capitalize though, as after reaching the Bears' 20, Mannion suffered a 10 yard sack, pushing Oregon St. out of field goal range.

Sofele got his night going with a 56 yard run, and Maynard capped the drive with a 19 yard touchdown pass to Michael Calvin on a slant route, below, that Oregon St., and especially safety Anthony Watkins, chose to not play defense against. 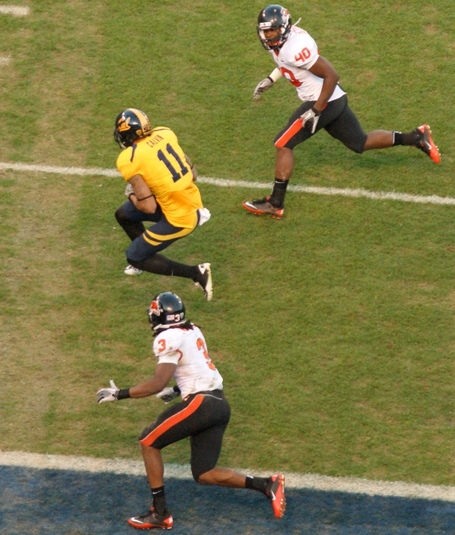 And just like that, what could have been a 2 touchdown Oregon St. lead was a 7-3 California advantage. The failures to capitalize would come back to bite the Beavers.

Oregon St. gave the ball right back when on 3rd. and 8, Mannion threw an incompletion on a route that wouldn't have produced a first down anyway.

California responded to being pinned at their own 4 yard line by Johnnie Hekker's punt with a 96 yard drive, capped by Maynard's 5 yard option keeper, above, where the defense did not force the pitch. The drive consumed 9 minutes.

Oregon St. again drove into scoring position, but on 2nd. & 9, Mannion threw a 4 yard pass, and then threw an incompletion on 3rd. down. Romaine's field goal 2 seconds before halftime pulled the Beavers within 14-6, but they should have been ahead. 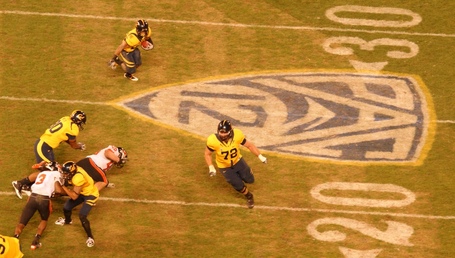 California came out of the halftime break with a 5 minute, 75 yard drive, capped by Sofele's 20 yard run, above, that Oregon St. not only failed to provide containment against, but also no correct pursuit to prevent the cutback, which allowed the Golden Bears to take a 20-6 lead. The extra point was missed, which kept it a 2 score game without the need for a 2 point conversion.

Oregon St. again drove into California territory, but Mannion threw an incompletion on 3rd. and 4. The Beavers' coaching staff elected to go for it on a fake punt, but dialed up a screen pass call that resulted in a 4 yard loss. 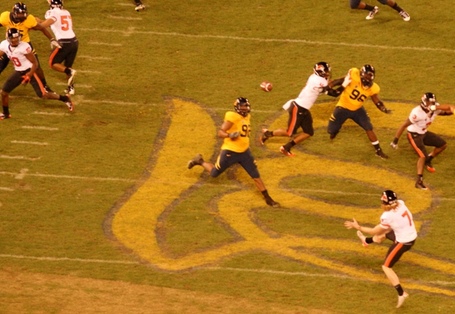 Unfortunately, the pass was completed, but for a 4 yard loss.

The next Oregon St. possession resulted in another trip into the California red zone, but after reaching the Golden Bear 17, Mannion fired an off target pass to James Rodgers which was deflected, and intercepted by D.J. Campbell.

Despite all of this, the Beavers were still able to mount a drive for what looked like the score that would have made it a 1 play game early in the fourth quarter. But after a pass interference penalty had put Oregon St. on the California 2 yard line, Jovan Stevenson was ruled down short of the goal line, despite his not being downed until he was in the end zone (below). Apparently, slant runs are now ruled to not be making forward progress when moving laterally. 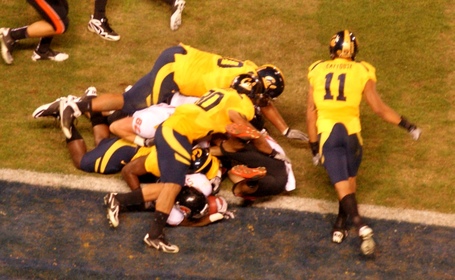 No one in the Oregon St. booth apparently suggested that the Beavers use a time out, allowing replay time to realize the spot wasn't right. Considering Oregon St. let the game end with 2 time outs still on the board, this was a critical oversight in light of what was a game changing dubious call. 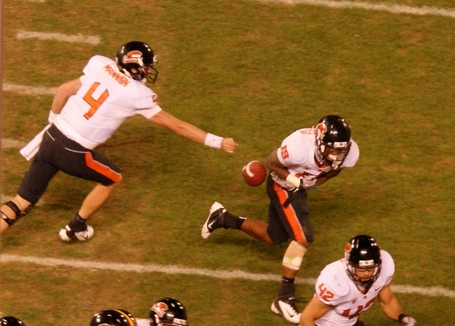 Two plays later, a fumbled exchange (above) frustrated yet another Oregon St. drive. California proceeded to eat up 9 minutes with a 15 play, 82 yard drive, which, despite twice having touchdown runs called back by holding penalties, still produced the 32 yard Giorgio Tavecchio field goal that make it a 3 possession game with only 2:23 left.

The Oregon St. defense, which tackled poorly all night, discouraged by the turn of events, looked even more inept on the California drive to put the game away.

Mannion would again drive Oregon St. into California territory, but then rather than throwing deep, 3 and 5 yard completions were the calls, with receivers open deep in both cases. And then, another interception ended the frustrating Oregon St. performance, and initiated the festivities for the Golden Bears. 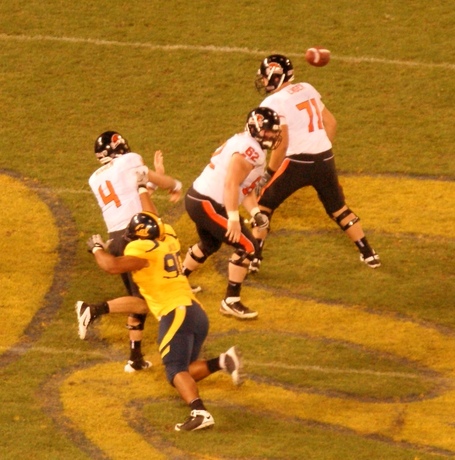 Mannion, above, did complete 26 of 40 passes, for 243 yards, but not only threw a number of inaccurate passes, he also frequently never noticed open receivers, locking in on the primary receiver, regardless of coverage. 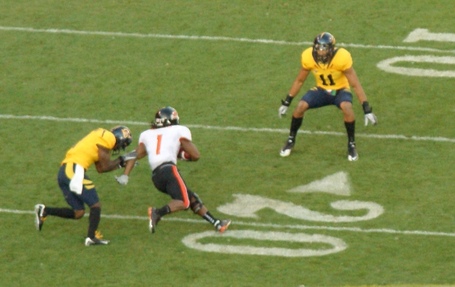 Mannion also completed 6 passes to Rodgers, above, who is now second all time in receptions for the Beavers, with 218, just 2 behind Mike Hass' school record. Rodgers' 6 catches for 76 yards made him the game's leading receiver. It was one of very few bright spots for Oregon St. on a beautiful afternoon in the Bay Area. 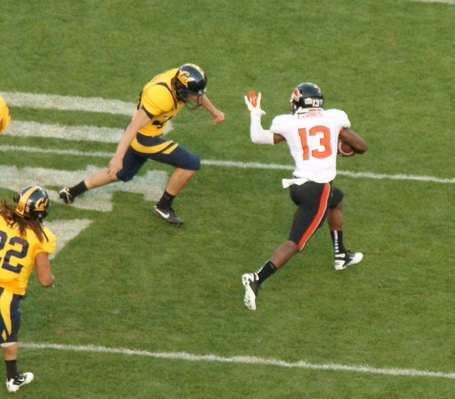 Oregon St. made an unexpected move on kickoff returns, removing Jordan Poyer from them, opting for Brandin Cooks instead. Cooks, above, had 119 yards on 5 returns, after an apparent fumble was negated by being down by contact. And while Cooks, who also had 3 catches for 31 yards, was effective, the decision to relegate Poyer to only punt returns removed one of Oregon St.'s best weapons from multiple opportunities to make a play.

The win improved California to 6-4 on the season, and 3-4 in the Pac-12 Northern Division race, and virtually guaranteed a bowl game, as the Pac-12 had 7 bowl tie ins, as the Bears became the sixth conference team to reach bowl eligibility. It also snapped a four game losing streak the Bears had suffered against the Beavers.

If the Golden Bears are to have any further success this season, however, they must address mistakes by their offensive line, in the form of both illegal procedure and holding calls. A number of both resulted in California being penalized 15 times for 130 yards. And Anderson had 2 scoring runs negated as well as the one Sofele suffered. Despite that, the Bears still held onto the ball for nearly 13 minutes more than the Beavers had it.

Oregon St. (2-8, 2-5) has now lost 12 of their last 15 games, and 17 of 24. The Beavers are also assured of their third consecutive declining year compared to the prior season, and fourth slippage in their last five campaigns. Unless the Beavers sweep their remaining games against Washington and at Oregon, who took control of the Pac-12 Northern Division race tonight with a 53-30 win at Stanford, 2011 will also be the worst season at Oregon St. in coach Mike Riley's career.

There's no reason to expect that will happen. Tacking fundamentals were terrible, coverage schemes were ineffective and often fundamentally flawed, and containment was non existent. Offensively, there was no semblance of a rushing attack until the game was out of hand. Mannion overlooked numerous open secondary receivers, and forced balls into multiple coverages on a number of occasions. Play calling and clock management were both pitiful.

The net rushing deficit over the current 3 game losing streak is well over 700 yards. And the blame is shared all across the team for that.

Very disappointing were the poor fundamentals exhibited throughout the game. While unacceptable at any time, with a younger team, early in the season, some of that is nevertheless expectable. By mid-November, the performance against California served as evidence that coaching hasn't adequately addressed the basics despite 3 ½ months of practice time.

The sizable contingent of Oregon St. fans that made the trip to San Francisco deserved a performance worthy of their support. With only a few exceptions, the California team was the only one that gave them one.