The pitching was great for both sides, but ASU pushed across a tying run down to their last out, and the winning run in the 10th.

The Sun Devils started a familiar foe in sophomore Ryan Kellogg, who no-hit the Beavers in a 4-0 win last year. Any hopes of a repeat performance were ended early by an Andy Peterson sinking liner into center with one-out in the first. Michael Conforto and Dylan Davis also singled to score Peterson, below, to give the Beavers a 1-0 lead and a chance to push more across. 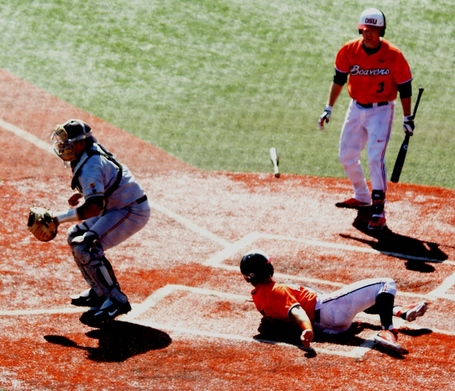 But Davis was inexplicably stealing on Kellogg's first move, and when Kellogg picked over to first, Davis' attempts to stay in a rundown and enable Conforto to score didn't pan out. What could've been a Kavin Keyes sacrifice fly was instead th ethird out of the inning, and the Beavers settled for the 1-run lead.

Andrew Moore cruised through the first 4 innings, giving up 3 hits (1 via bunt) and one walk. The Sun Devils tied it in the 5th, however, thanks to a lack of defensive execution. What should've been a leadoff single or possibly a leadoff flyout was played into a double by Dylan Davis in right field. It wasn't clear exactly what happened after the ball bounced, but it appeared to kick off his glove with him thinking he'd caught it, and by the time he located and retrieved it, Jake Peevyhouse was standing on 2nd. A bunt and groundout to shortstop brought him home, tying the game at 1.

The Beavs quickly regained their lead in the bottom half of the inning, when Nick Rulli sliced one down the right field line past a diving Trever Allen, whose attempt granted Rulli an extra 90 feet and put him at 3rd base, below. 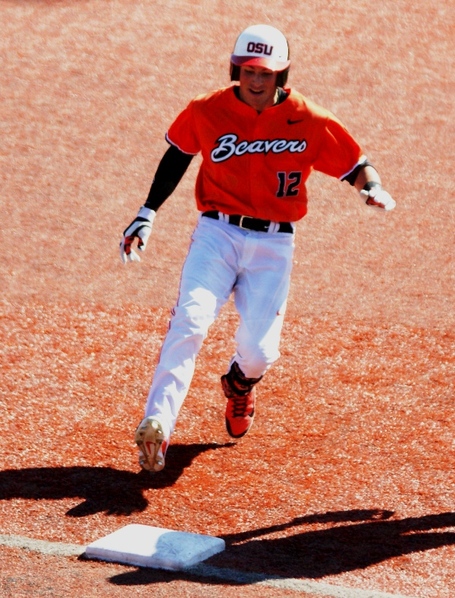 That lead looked like it could go the distance, as Moore was handling the Sun Devils well, with the exceptions of first baseman Nick Causey and the leftfielder Peevyhouse, who were 4-4 and 3-4, respectively. Still, he scattered the hits he surrendered, and despite only having one 1-2-3 inning, gave up just the 1 run and did so without running into much trouble until the 8th. That was when the Sun Devils really threatened, leading off the inning with a liner that first basemen Jared Casper climbed the ladder to snag and save extra bases.

Expect to see more of Casper at first and Keyes at third rather than vice versa. The two switched positions today after Casper's two errors last night, and both looked more than serviceable at their new corner. Back-to-back one out singles had ASU in business, but a close out call that Arizona St. thought was controversial as Logan Ice fired down to third, after a wild pitch helped Moore keep the lead. 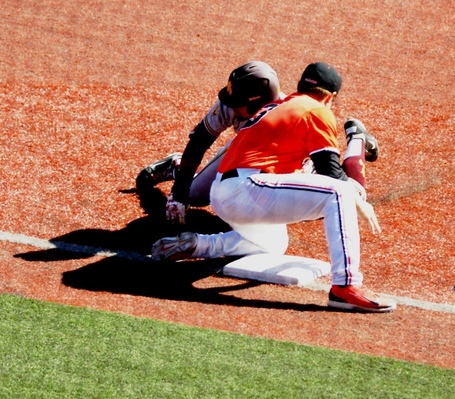 Clearly, Keyes had the bag blocked, though.

He wasn't so fortunate in the 9th, which he started with a pitch count of 100. The trouble started with 2 outs and Peevyhouse at the plate. He doubled down the line and Dalton DiNatale grounded one through the right side to tie the game and end Moore's night after 8.2 innings, 10 hits on 2 runs, and 5 strikeouts to 1 walk. Scott Schultz got a strikeout to end the inning.

Kellogg got through his half of the 9th with ease, and his line includes 2 runs on 9 hits, 4 strikeouts, and a win, thanks to ASU taking the lead in the top of the 10th. Schultz returned for the 10th and gave up a leadoff single to Johnny Sewald, who was bunted to 2nd. The red-hot Causey was intentionally walked, and RJ Ybarra hit a game-winning one-run double on the first pitch from Schultz, who escaped without further damage but took the loss.

Sun Devil closer Ryan Burr picked up his 4th save of the season bu picking up a strikeout on pinch-hitter Jeff Hendrix and Trevor Morrison, and Peterson's flyball fittingly landed in Peevyhouse's glove, who'd already kept the Sun Devils alive, and now had really ended the Beavers' day.

Kellogg collected the win to improve to 2-2 for the season, and Scultz suffered the loss, dropping to 3-2.

The sunny day saw the largest crowd of the season, 3,021, and the first to surpass the 3K mark, turnout, only to be heartbroken late in the day.

In Sunday's rubber match, lefty Jace Fry (4-0, 1.58) will face off against Darin Gillies (1-1, 4.94), who pitched a scoreless relief inning against the Beavers last season.