Dashon Hunt and Larry Scott are 2A and 2B on the depth chart and they are both going to play a substantial amount thanks to the liberal use of nickel and dime defenses.

Dashon Hunt is a redshirt freshman that was highly touted as a recruit, unfortunately he got sick early and with the depth in the defensive backfield the coaches decided just to shelve him for the year. Larry Scott barely saw the field last year, as he was stuck behind Rashaad Reynolds, Steven Nelson, and Sean Martin. Neither of these two made a large impact last year, although Scott did force a fumble in the Hawaii Bowl which resulted in a touchdown.

Both players are likely to play for the Beavers this year, as Mark Banker has utilized 5-db sets more often over the last few seasons. They are both deserving of that time too, as Hunt has looked good although he has been held out of camp with an injury. Scott has looked very good too and in the last Saturday scrimmage I can only recall him getting beat once in a one-on-one matchup. 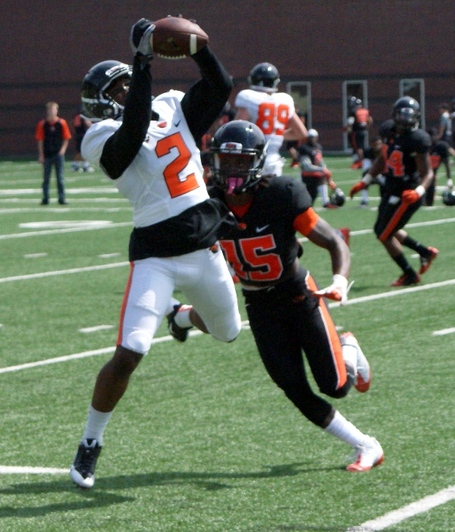 Scott is a slightly bigger cornerback, listed at 5' 11" and 192 lbs, which is the same height and almost the same weight as top cornerback Steven Nelson. He has not seemed to lack in quickness or speed though, he has done well covering receivers and playing the ball as well. It seems almost every other practice he is mentioned for picking off the quarterbacks, which recent Oregon State cornerbacks have done better at since the arrival of Rod Perry.

Hunt is smaller at 5' 8" and 182 lbs. He is reportedly extremely quick and with good speed as well. He should be a solid player for OSU if he can get back on the field, but he has been currently limited with a hamstring injury that was acquired during the summer. It seems questionable as to how much he will get to play, but when he does he has been lauded as having great instincts to go along with considerable physical tools.

In my eyes if they get on the field they are both about the same level. This is why I combined their ranks, because the two cornerbacks are essentially equal. As long as Hunt is healthy they should be solid in the secondary, and with Nelson on the other side, they should provide great coverage.