If anyone was going to run out of gas in Sunday night's Pac-12 Tournament Championship game, it was supposed to be USC, not Oregon St. After all, it was the Trojans that had to play 4 games in 4 days, and against the tougher overall draw (USC had to beat 3 NCAA tournament bound teams in a row); whereas the third seeded Beavers had the optimal trip to the title game, with double digit wins in slower paced games, and against teams not close to an NCAA invite.

But in what would be a harbinger of things to come, USC closed the half on a 6-2 run, wrapping a 2 + 1 by Kiki Alofaituli and a 3 by Brianna Bennett launched from right in front of Oregon St. coach Scott Rueck as the shot clock was sounding, and 9 seconds left in the half, around a pair of Gabriella Hanson free throws to pull within 36-29.

USC roared out of the locker room with a 9-0 run, as Oregon St., after committing only 6 turnovers in the first half, turned the ball over 4 times by the first second half media timeout.

Compounding the problem for the Beavers, Ruth Hamblin picked up her 3rd personal foul just 3 1/2 minutes into the second half.

The Trojans pulled out to a 5 point, 48-43 lead by the second media time out of the second half, before Sydney Wiese was able to slow the USC charge with a 3 pointer.

Courtney Jaco answered with a 3 of her own though, and the Beavers wouldn't score from the floor again for 8 1/2 minutes.

In the meantime, the Trojans made it a 23 point turnaround in 15 minutes of game clock time, opening a 60-48 lead on Ariya Crook's basket with 9 minutes to go.

Once USC got the lead to double digits, Oregon St. was unable to get it back to a 2 possession game until Devon Hunter achieved her career high, with 19 points, with only 1:49 to go, pulling the Beavers within 65-60.

Rueck opted to use his last time out at that point, and when the Beavers' defensive stand didn't pan out when Brianna Barrett buried a shot clock beater in traffic, Oregon St. had to resort to 3s, and fouling to stop the clock.

Unfortunately for the Beavers, both Weisner and Wiese were unable to live up to their #swishsisters moniker, both missing 3s, while Barrett and Cook both buried both of pairs of free throws to earn the 71-62 win, and the Trojans' first ever Pac-12 Tournament Championship.

It was the first ever Conference Title game to not involve Stanford, after USC had upset the Cardinal 72-68 last night, and also the first championship game to involve a team from the Northwest, after Oregon St. eliminated Washington St. 70-60.

And the Beavers again got off to a fast start, as they had against Utah and the Cougs, jumping out to a 5-0 lead.

But the Trojans answered with a 6-0 streak of their own, and the Beavers were behind for the first time in Seattle.

USC capitalized on back to back missed 3 pointers by Ali Gibson to extend it to a 10-2 run.

But Wiese led an Oregon St. resurgence, and the Beaver defense, which had been the key to their first two wins, held USC without a basket from the floor for 6 1/2 minutes. 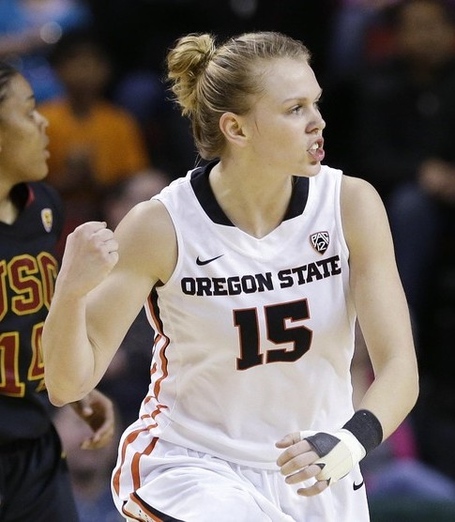 After Weisner's 3 made it an 11 point lead, (above, AP photo by Elaine Thompson), Oregon St. appeared to have USC set up for the knockout, but the fact that the Beavers hadn't really been challenged in the second half of the Pac-12 season might have worked against them. After 11 consecutive wins, all by double digit margins, and the first 9 without Weisner, the longest winning streak at Oregon St. since a 14 game run in the 1982-83 season, the Trojan rally wasn't something the Beavers had faced the like of lately.

It could prove helpful in the long run though, as the Beavers will still be headed for the NCAA tournament, along with Stanford, California, and Arizona St., and the experience could be another learning experience for a team with only 1 senior and 1 junior on the roster.

And USC, who was still a bubble team despite their win over Stanford, by taking the automatic bid, probably assured the Pac-12 5 teams in the field of 64 when its announced next Monday.

Hunter's career high 19 points was also the game high, and she also grabbed a game high 11 points, for the only double double of the night.

Wiese added 17, and Hamblin finished with 10 points, and also 7 rebounds, and 6 of Oregon St.'s 8 blocked shots.

Crook led 4 Trojans in double digits, with 16 points, and Alofaituli was right behind, with 15. Cassie Harberts added 12, and Barrett 11, for the well balanced USC attack.

It was only the 3rd conference title not won by Stanford, who had claimed 7 titles in a row, as USC joined the 2002 Arizona St. and 2006 UCLA teams as the only interlopers. 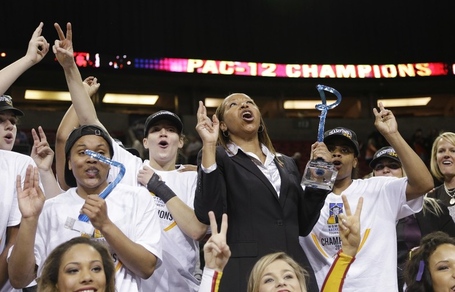 It was also a rare conference championship game in which both teams were coached by alums, but it was first year USC coach Cynthia Cooper-Dyke, above celebrating with her team (AP Photo by Elaine Thompson), who had the advantage in the end over Rueck. Rueck, in his 4th year at his alma mater, did get his first 2 conference tournament wins this season.