Oregon St. Adds A JC D-Lineman And A Defensive Back

Share All sharing options for: Oregon St. Adds A JC D-Lineman And A Defensive Back

Oregon St. has added another pair of commits to their 2014 recruiting class, and one they initially didn't think they (or anyone) would for another year.

Defensive lineman Luke Hollingsworth will join the Beavers, after 1 season at Snow Junior College in Utah. Hollingsworth, from Hooper High in Fremont, Utah, grey-shirted in 2012, before playing for the Badgers last year, and was able to get ahead of schedule with his studies enough to finish early, and will have 4 seasons to play 3 when he arrives at Oregon St.

Hollingsworth is a 6'3", 265 defensive lineman, considered somewhat undersized, which is what limited his rating. That happens to be almost exactly the dimensions of Scott Crichton, who departed this year for the NFL, and very close to Dylan Wynn, and going with those guys worked out pretty well for Oregon State head coach Mike Riley and defensive line coach Joe Seumalo.

Here's a look at a high school highlight reel of Hollingsworth:

The Beavers have also received a commitment from Dwayne Williams, a cornerback from Shoemaker High in Kileen, Texas. 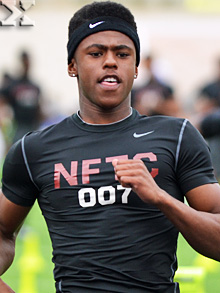 Despite that accomplishment, Scout.com has him as a 2 star recruit.