The Oregon St. women completed a weekend sweep of Oregon in the Civil War Monday night, "hammering" the Ducks 84-70 in record setting fashion.

Usually the story line on this year's Beaver women's basketball team is about Wiese and Weisner, as in Jamie Weisner, and Sydney Wiese, and they certainly both had a hand in the win, but tonight it was all about Ruth Hamblin and Gabriella Hanson.

Hamblin, Oregon St.'s 6'6" sophomore post, backed up her 27 point, 16 rebound effort in Saturday night's 88-80 win with only the second third ever triple double in Beaver history. Hamblin is a physical mismatch many teams have no answer for, and the quick but small Oregon squad is no exception. It resulted in Hamblin being able to power her way to 23 points on 11 of 15 shooting and a dozen rebounds, and an Oregon St. record 10 blocked shots, eclipsing the record she shared at 9. 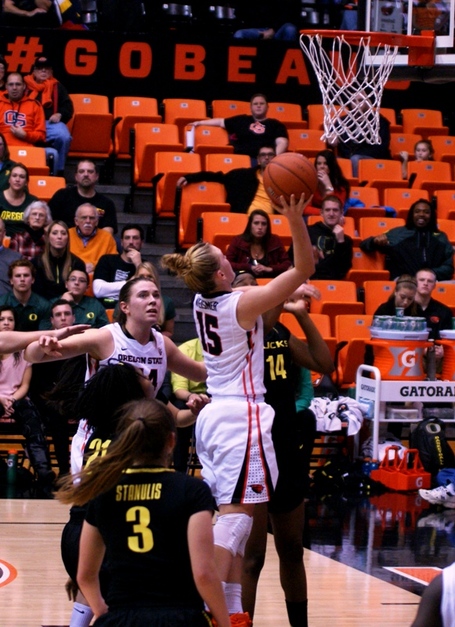 Weisner, above, had 17 points, but Wiese, who had 24 Saturday night, earning Pac-12 Freshman of the Week honors in the process, was held to only 8, as Oregon coach Paul Westhad's plan to run the dynamic pair of Oregon St. guards into the ground paid off in the second half.

Both Weisner and Wiese were a part of some early 3 pointers as Oregon St. opened a double digit first half lead, but Weisner was clearly gassed late in the game, and Wiese was only 3 of 13 from the field, including 2 of 12 on 3 pointers, finishing with 8 points, and you could see arms and legs of noodles.

Compounding the problem, Hamblin got in foul trouble early in the second half, picking up her third personal with 16:38 left. 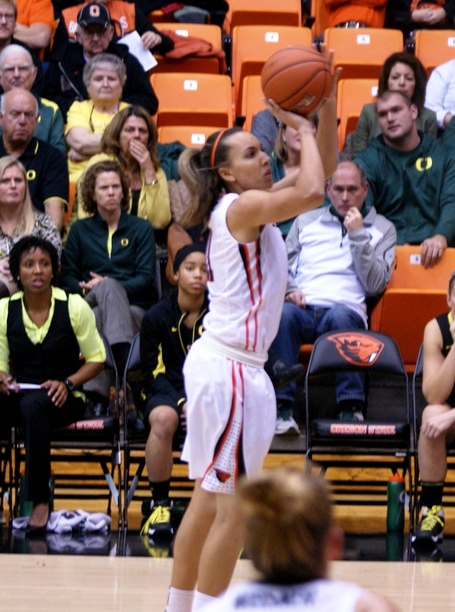 Oregon St. was up 12 at that point, but their 54-42 was quickly cut to 56-52 by a 10-2 Oregon run. But Oregon St. coach Scott Rueck turned to Hanson, above, and the freshman eclipsed her career best in the second half, with 12 of her new career high 19 points, including 2 of the 3 pointers she took and connected on in the game.

The first came after Oregon had cut the deficit to 1 point.

Hanson's second half heroics stemmed the Oregon charge that threatened to seize the lead, and Oregon St. rebuilt a double digit lead. Hanson had half the points in the 14-2 Oregon St. run to regain control of the game.

The Beavers needed all of it, as despite playing without injured Danielle Love, the Ducks got double figure scoring from all 5 of their starters, led by Jillian Alleyne's 18 point, 19 rebound double double.

Oregon St.s win gave them their 3rd season sweep of Oregon in the last 3 years, and 7th win in a row over their rivals. The Beavers are now 10-6 for the season, and 2-2 in the Pac-12, before heading to Los Angeles for this weekend's series at USC Friday and UCLA next Monday. They will then have 8 of their final 12 games at Gill after this weekend's trip.

It was a great night to be a Beaver. Cue the fight song! 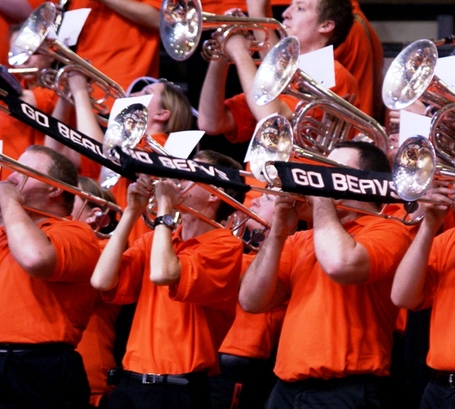