Share All sharing options for: Oregon St. Bounces Back To Beat Hawaii

Oregon St. shook off a shocking upset loss last week to Eastern Wasnington (who happened to win 43-14 today against Western Oregon, with Vernon Adams throwing for 5 touchdowns) to soundly defeat Hawaii 33-14 this evening at Reser Stadium. 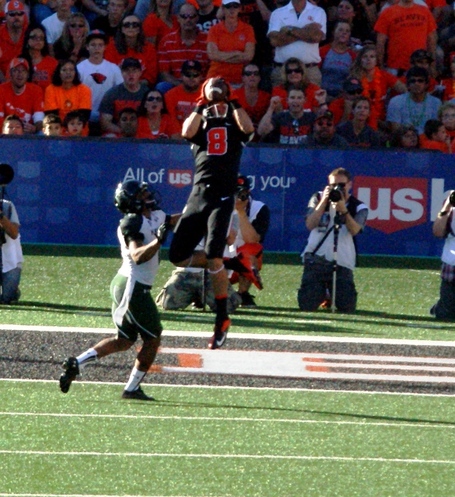 The Beavers bolted out to a 14-0 lead, as Sean Mannion picked up where he left off last week, completing 11 of his first 13 passes, only to have Hawaii rally to tie the game before halftime. An odd-looking 23 yard pick-6 by Julian Gener, below, jump started the Rainbows, and Hawaii pulled even with an impressive, 80 yard scoring drive. 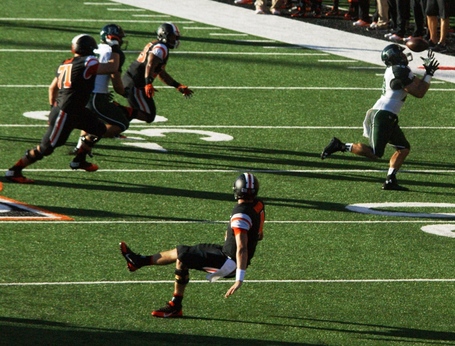 Mannion and Oregon St. dominates the 3rd quarter though, putting together a pair of long clock consuming scoring drives, while the Beaver defense that was shredded by Eastern Washington last week  held Hawaii to two 3 and punts in the period.

Another Oregon St. drive put Trevor Romaine to make it a 3 possession game with a 34 yard field goal, and back to back bizarre miscues by Hawaii that left the Rainbows on their own 1 yard line after the ensuing kickoff, when Chris Gant inexplicably fielded the kickoff at his own 1 yard line and then stepped out of bounds, and then Hawaii had to hand the ball right back to the Beavers after a safety, after they inserted backup quarterback Sean Schroeder, and they failed to get out from under the shadow of the goal post when Oregon St.'s Dylan Wynn initially jumped off side, but they didn't snap the ball.

That made for the final score, and effectively ended the game.

Mannion, despite the interception and the first 2 sacks of the season he suffered, had another magnificent game, completing 31 of 43 passes for 372 yards and 4 touchdowns, 2 of which went to Brandin Cooks. Mannion "only" completed 72% of his throws, which drug his season completion percentage down to 79%, but increased his season touchdown toss total to 7. Cody Vaz even came on as the closer in relief of Mannion, and completed 4 of 6 passes, for another 79 yards. 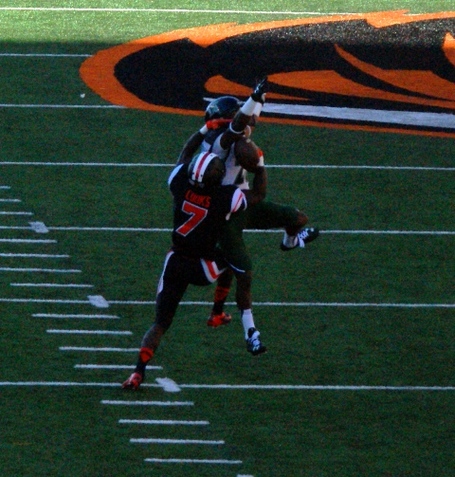 Brandin Cooks had 7 catches for 92 yards and 2 touchdowns.

But the main story of the game was the improvement of the Oregon St. defense. After surrendering 625 yards and 49 points in the opener, the Beavers limited Hawaii to 239 total yards, more than a third of which came after the safety, and just one score. 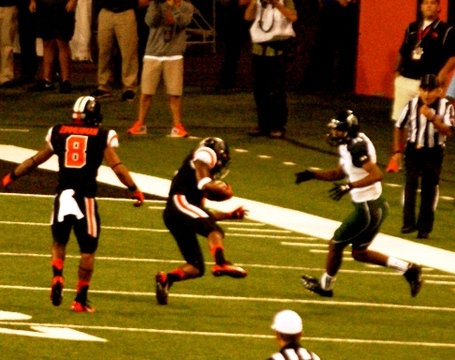 Part of that was due to a far less potent Hawaii offense, but an enhanced attitude, as well as a shift to use speedy Steven Nelson a lot more in the nickel coverage package. Nelson, who had an interception of Schroeder, above, to seal the deal for the Beavers, is the fastest player on the Oregon St. defense, and that resulted in less of the over-playing by other members of the secondary that contributed to coverage, containment, and tackling problems against Washington St.

Injuries were the other big issue of the evening, and it started immediately after Oregon St. had scored to go up 7-0. 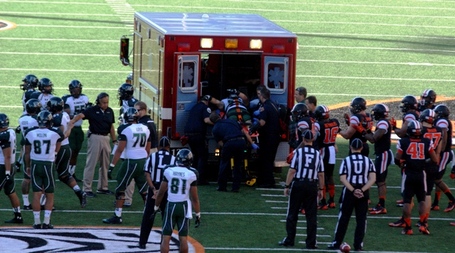 The game was delayed after the ensuing kickoff when the Rainbows' Brenden Daily suffered what was initially diagnosed as a concussion. Daily was conscious, and waved to the crowd and his teammates, above, as he was being loaded into an ambulance brought onto the field to transport him to Good Samaritan Hospital in Corvallis for further evaluation.

Preliminary reports were encouraging, but the loss significant, as Daily is also Hawaii's starting middle linebacker, and had recorded 10 tackles in the Rainbows' opener against USC.

Daily wasn't the only linebacker lost though, as Oregon St.'s OLB Michael Doctor left the game in the first half with an apparently serious foot injury. Doctor was re-evaluated at halftime, and returned to the sideline for the second half on crutches, and sporting a boot.

"I think he might not be playing for a while," Riley said.

It will be early in the week before the training staff and team doctors have a more complete assessment, but initial triage suggests Doctor may not get a doctor's release until at least the end of the month, after Oregon St.'s road games against Utah, and the following week at San Diego St. Caleb Saulo took over for Doctor.

With D.J. Alexander out until probably next week's game at Utah, the absence of both of the outside linebackers, and the only LBs on the squad with any significant experience at the position, probably contributed to Hawaii's ability to sustain their 80 play, game tieing touchdown drive. 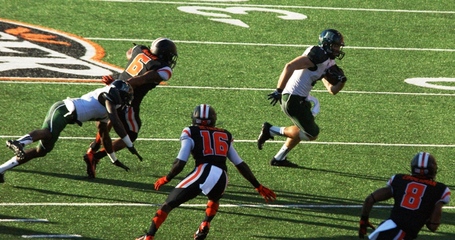 Clark Evans' 15 yard touchdown reception from Taylor Graham, above, was almost a foregone conclusion before Graham ever released the ball when Oregon St.'s Sean Martin took too shallow of a route, but its certainly possible a totally green LB corp could have contributed to Martin's coverage route error.

A bigger problem could be the offensive line, after Grant Enger and Roman Sapolu went out on consecutive plays in the 4th quarter. Sapolu's injury appeared to be the more serious, requiring another boot, and as such could well keep him out of next week's Utah game at a minimum.

Again, it will be early in the week before a better diagnosis is available, but the way Oregon St. finished the game, with center Isaac Seumalo, himself in his first game back after a knee injury, at right tackle, and Grant Bays at right guard, along side Josh Mitchell at center, wasn't what Oregon St. wants to do. But with 3 tackles out, there weren't a lot of choices.

This group is still a capable unit, but there's almost no depth left on the bench.

With their record evened at 1-1, Oregon St. is bound for a far tougher challenge at Utah for both teams' Pac-12 opener, after the Utes improved to 2-0 with a 70-7 win over FCS Big Sky neighbor Weber St.

The other popular topic of discussion this coming week, both in the media and the coaches' meetings, is sure to be Oregon St.'s limited rushing game, after the Beavers ran for only 57 net yards on 33 carries.

While its worth noting the fly sweep and even a double reverse netted zero net yards on the night, which is a big concern, the rushing numbers, and Storm Woods being limited to 50 yards on 17 carries wasn't what Oregon St. was looking for despite serious efforts to run the ball, its important to not overlook some other numbers. 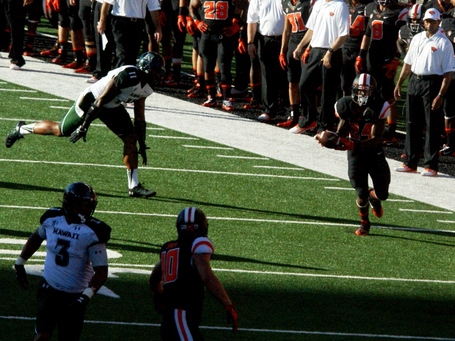 Not to go all Mike Leach here, but Woods, above, also had 7 catches for 95 yards, and Terron Ward had another 3 catches for 14 yards, and those 109 yards and 10 touches need to be considered as a part of the rushing "package" for the Beavers. The primary objective is to get Woods the ball in position to make productive plays, and it doesn't matter how that's done, so long as it gets done.

Oregon St.'s running between the tackles have to improve if Oregon St. is to be a threat to return to the top 25, but with the way Mannion is completing passes, its an "ok" reality that instead of about a 50:50 split between the pass and the run, the Beavers are going to be about a 2:1 pass to run team.

All in all, it was a better than average day to be a Beaver, though only 38,179 turned out to do so, the smallest ticket sale total in several years. This on a perfect weather day and evening.

It's a clear sigh that the loss to Eastern Washington shook the faith of a significant number of Beaver fans. One wonders how different things might have been had last week's game unwound only slightly differently, with Mannion having only a few more seconds to work with, which might have resulted in pulling out the comeback win. 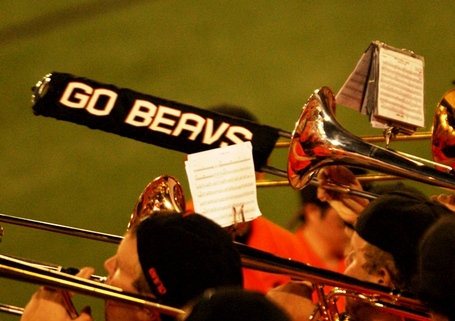