Oregon St. added some depth at defensive end in their 2014 recruiting class last week with a couple of additional commitments Kurt initially reported in this morning's Dam Links, when Glyeb Ewing from Waukon, Iowa, and Shane Bowman from Bellevue, Washington, decided to become Beavers.

Junior starters Scott Crichton and Dylan Wynn still have 2 years of tearing up opponents left, but with primary backups John Braun and Devon Kell both graduating after this year, and only 2 other sophomores on the roster at the position, and JC transfer Charles Tuaau not yet qualified, if next year's recruits red-shirt, even with the 2 Hawaiian signees expected this fall, by the time they see the field, there won't be that much depth at the position.

The Beavers had already picked up Sumner Houston back at the first of the month, but coach Mike Riley was certainly looking for more depth. 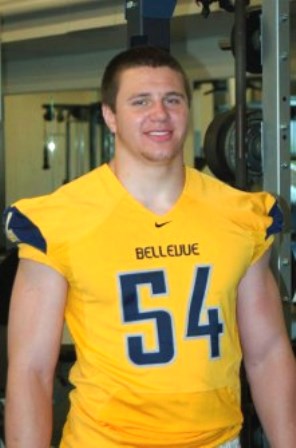 Bowman, above, is 6'4", and 242 lbs., and hails from the powerhouse Bellevue Wolverine program that contends for the Washington state championship on an annual basis, and wins it with some regularity, as well as producing multiple next-level players each season.

Bowman has been clocked at 4.7 in the 40, decent if not blistering for a defensive lineman, and is rated a 2 star prospect by both Rivals.com and Scout.com.

At 6'5", and 235 lbs., Ewing is a long, tall player, who could become pretty imposing if he can fill out his sizable frame. Ewing has been timed at 4.8, but can squat lift 350 lbs., and has a vertical jump of 28.5". You get an idea of his overall athleticism browsing his videos at hudl.com, where one of the first things you notice is that he is not only a 2-way player, but also a kicker. And we know how much Coach Riley likes versatile players that give him options as to how and where to plug them into the program. Ewing impressed when he attended camp at Oregon St.

Ewing is not yet rated by either Rivals or Scout, but will graduate from Waukon High after being a 4 year starter. His other offers were from FCS teams, Big Sky power Montana, and several from the Missouri Valley Conference, but they included 2 time FCS National Champion North Dakota St., and Northern Iowa, which Beaver fans may recall took 3 time Big Ten Champion Wisconsin to the limit before falling 26-21 last year at Camp Randall.