One quarterback is named. Who will be ranked higher, Sean Mannion or Cody Vaz?

Share All sharing options for: Beaver Football: Top 25 Countdown - 16 and 15

Here is the first of the two potential starting quarterbacks for OSU. Cody Vaz came in after Sean Mannion got hurt against Washington State, starting his first game against Brigham Young University. He initially had success, leading the Beavs to victory against BYU, Utah, and Arizona State, with a loss to Washington coming with Mannion mostly at quarterback. Vaz is the not the biggest or strongest quarterback, but makes up for his lack of arm strength with sound mechanics that let him get some zip on the ball.

Vaz has some serious deficiencies as well though, his lack of size does make it hard for him to see over the line and make throws. He had two big fumbles, which were just as a cause of his poor ball handling, one came against Arizona State for a touchdown, and the other came against Stanford in the 4th quarter which lead to the goahead score for Stanford. He seems to lack awareness, as shown most obviously when he took ten sacks instead of getting the ball out in the Alamo Bowl, or at the very least throwing the ball away. His lack of daring seems to be a problem as well in conjunction with his lack of awareness, most notably in the aforementioned Alamo Bowl, where he just kept taking those sacks instead of creating some sort of positive play.

In the end Vaz looks like a great backup quarterback. He came in for a few games, played well, but as the season went along, he was unable to sustain his success. Some of his success was extremely lucky as well, the most notable instance being against BYU when he had a pass in the red zone deflect off a Cougar defender and into the waiting hands of Colby Prince. It could have easily been an interception, but Vaz got away with one there, and as the season went on the luck continued to go away.

Vaz is a good quarterback, but has many flaws as well, and this holds him to the middle of the rankings.

Terron Ward is the number two running back going into this season, and has earned his spot. Ward started as a grayshirt for Oregon State and struggled that year along with everyone else in that dismal season. Last season he showed some serious growth though, from 2011 to 2012 he had roughly the same number of touches but doubled his yardage. He took advantage of injuries and showing what he was capable of. He got his chance to shine especially against Arizona State when Storm Woods was struggling with injuries, and he went off for 146 yards, with an average of 7.7 yards per carry for that game. For the season he averaged 6.1 yards per carry. 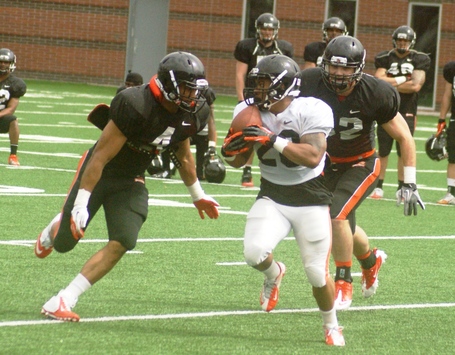 Ward has always been a one cut runner, where he identifies the hole and shoots through it. His freshman season was problematic, as a porous offensive line and indecision left him hesitating in the hole and getting brought down. In this last season though he was seeing the gaps well and took his one cut and hit the hole hard. This coupled with an improved offensive line helped Ward to a solid season.

Ward is a talented runner, but will not get as many carries as the change of pace back, and Storm Woods will get the majority of the third downs. Ward is a good player but lacks the explosiveness to be the top back for the Beavs.