Share All sharing options for: Beaver Football: Top 25 Countdown - 18 and 17

Richard Mullaney is a sophomore wide receiver who played sparingly last year which accounts for why his stats are not very high. He did not get a lot of playing time, as he was the back-up to Markus Wheaton, and it's hard to get on the field when the best player on the team is in front of you. When he played though, he displayed great hands and solid route running. Mullaney will not blow you away with athleticism, but he is able to create separation with his other abilities.

Mullaney is in the battle to take Markus Wheaton's vacated position and should be the front-runner for the position. His main competition will be Obum Gwacham who did not look great playing last year. Mullaney should win out and become another in a long line of Beaver receivers like Mike Hass or Damola Adeniji, who seem to achieve well beyond their own level.

Mullaney is placed on this list mostly on his potential, but I expect him to back up this support once the season begins.

Tyrequek Zimmerman was one of the starting safeties last year and generally played well. His 63 tackles was good for fourth on the team last season. Zimmerman did not make a lot of memorable plays however. He did have 39 solo tackles which was third on the team only behind Rashaad Reynolds and Michael Doctor, so he was doing a good job of stopping plays, but most of what he did was never any of the splash plays. He is still important to the Beavers though, as someone is still needed to make those plays. 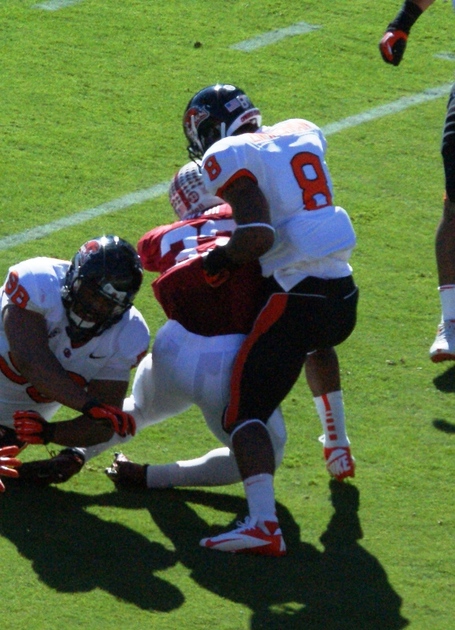 Zimmerman started at Oregon State as a wide receiver and made the transition to safety in his freshman season. He was a well regarded recruit at wide receiver so the switch showed how badly he wanted to play.

By pure stats alone Zimmerman should probably be higher on the list, but he actually started lower on the list. My initial version of the list was based mostly on my opinion of how they had performed last season. I had Zimmerman even lower actually, somewhere in the high twenties. With his athletic ability he could become one of the best safeties in the Pac-12, the only thing he is missing is making the big play.