40 days until kickoff vs. Eastern Washington.

The official OSU website put together a list of the 34 Beavers currently playing pro baseball and how they are faring.

Bob Lundeberg of the Albany Democrat-Herald takes a look at former OSU football players preparing for the NFL in the offseason. Some of them in their first year out of school, some of them from a few years ago. 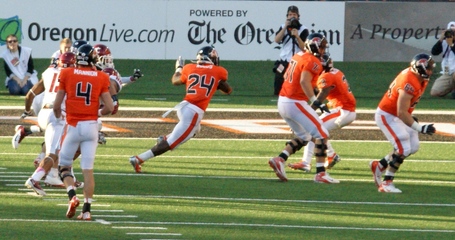 Another watch list honor for the Beavers. The Doak Walker Award goes to the nation's best running back, and Storm Woods, above, is on the pre-season watch list. Curiously, he's one of two Storms nominated for the award. The other, Storm Johnson, plays for Central Florida. Are we done with these yet?

The Gazette-Times takes a look at Gabe Clark, the one OSU Beaver playing for the Corvallis Knights this summer.

Corvallis native and CV alumni Kyle Gardner has left the OSU football program to join Portland State. The primary cause was lack of playing time, and being way too far down the depth chart. Gardner was a walk-on, so this doesn't free up a spot for anyone else. Sad to see him go, particularly since playing for the Beavers was a dream of his since a kid, but I wish him the best of luck.

Ted Miller of ESPN's Pac-12 blog takes a look at position reviews in the Pac-12, and ranks each as Great Shape/Good Shape/We'll See. So far, they've looked at Quarterback (the Beavers ranked as good), Running Back (great), Receiver(great), Tight End (good), and Offensive Line (good). The O-line in particular seems like it will be critical to OSU's success this year; Isaac Suemalo and Michael Philipp form a great starting core, but they need a little more consistency after the Alamo Bowl. If not, fasten your seat belts, it's going to be a bumpy ride.

Ted also discusses his "Measuring Stick" games for each Pac-12 school. Oregon State's should come as no surprise, although you could certainly have a debate about any of the last five games of the year.

Found an Eastern Washington message board with a thread about Oregon State whose fans seem somewhat optimistic, although not overly so. Unsurprisingly, the words "Sacramento State" come up a lot. All I knew about Eastern Washington before today was "they have a red field" and "Colin Cowherd is an alumni." Now, at least I know they're in Cheney, Washington. And, in what might be a first, the Eagles play three teams from Oregon in 2013, but manage to do it without playing the University of Oregon. I guess FCS schools can schedule down a division for Buy-a-Win games as well.

Dylan Davis continues to tear it up for the Falmouth Commodores in the Cape Cod League. He is batting .349 with 5 HR and 21 RBI in 63 at-bats. Although he doesn't lead the team in home runs or RBI, that's likely because he's had about half the number of at-bats as his teammates, none of whom were playing as late into June as he was on their university teams. His adjusted for at-bat numbers are even more impressive. As a result of his success, he was named to the starting lineup for the West Division's all star game. What's even more impressive is that his stats are clearly the best on his team, and the Commodores produced 6 of the 9 members of the starting lineup in the All-Star game.

Michael Conforto continues to contribute for the National Collegiate team. In case you missed it, this article by Jason Quick is a month old and came out before I was doing The Dam Links, but is still largely relevant, as it talks a bit about Conforto's outlook next season.

Lindsay Schnell of the Oregonian / Oregon Live has another Olympic sport interview with Natalie Hampton of the OSU softball team.

The OSU Athletic Department put together a neat graphic about baseball attendance. The Beavers ranked fifth nationally (first in the Pac-12) in percentage capacity filled, and twenty fourth nationally (third in the Pac-12, behind the Arizona schools) in average attendance. Pretty good for a northern school that has terrible weather the first two months of the year.

OSU women's basketball sophomore Jamie Weisner is lighting up the scoreboard for Canada's national team at the FIBA U19 world championships.

Connor's going to be starting up a Best Beaver Baseball play of 2013 tournament in the next few days. You can review the contenders here.

Your non-Beaver one minute or less video of the day. This one's 18 seconds long. I wish I had co-workers in my office to play pranks on.

For the poll, we'll go back to this Golden Nugget odds link for a third (and likely final) time. This time, we're picking the second half of the season odds in order to see which line Beaver fans like best.

As always, vote in the poll, and we'd be curious to see your reasoning in the comments below. Also, if you find any cool Beaver links, feel free to post in the comments or e-mail them to me at kurtsahr@comcast.net.