Wetzler Wraps Up Wonderful Month With Win Over USC

Share All sharing options for: Wetzler Wraps Up Wonderful Month With Win Over USC

Oregon St.'s Ben Wetzler wrapped up a wonderful month of April of superior Sunday pitching with another strong effort that yielded a 6-1 win over visiting USC. Along with a series winning outing to kick the month off at UCLA, the Oregon St. junior has also prevented the Beavers being swept in the series at Washington, and closed out a pair of Pac-12 series sweeps, against Utah, and now USC, the first ever sweep of the Trojans, the only conference opponent the Beavers had never taken a broom to.

"This was a great weekend for us," Oregon St. head coach Pat Casey said. "We had three great outings from our starting staff."

The Beaver bullpen was only called upon to get 9 outs all weekend.

Oregon St. did beat USC back to back in 1952, to win the Pacific Coast Conference title, and earn that year's trip to Omaha, for the College World Series.

Oregon St. got off to a good start, jumping ahead 2-0 in the first inning when Michael Conforto singled to score Tyler Smith, who had led off with a walk, and later scored on Beau Day's single.

Wetzler made good use of the early lead, with really only 1 hickup all day, a 2 out solo homer by James Roberts, who went 2 for 4 for the game for USC.

The Beavers needed Wetzler's strong performance, as several miscues and a good effort by Kyle Davis, who allowed only 3 hits in 4 innings in relief of Trojan starter Kyle Twomley kept the game close most of the way.

Oregon St. added a run, but only 1 run, in the second inning, after loading the bases with no outs, and running into an unforced out at the plate in the 5th. After scoring Andy Peterson with a double, and advancing to 3rd on Ryan Barnes' fly ball that scored Conforto, Dylan Davis was inexplicably sent home on an infield grounder, and what could have been an inning when the Beavers blew the game open yielded only 2 runs.

Conforto was also thrown out easily stealing in the 7th, after Peterson had scored on a sacrifice fly by Davis, but wiping out what could have been a bases loaded situation with only 1 out, as both Barnes and Danny Hayes subsequently drew walks.

The Oregon St. defense, which had otherwise been sound all weekend, also contributed, when Davis attempted a sliding catch in right in the 6th inning that allowed USC to put runners on the corners instead of only at 1st and 2nd. The Trojans gave back the opportunity though, bunting with 2 outs for some strange reason.

Wetzler was unfazed by it all, and allowed only 6 hits, and the 1 home run, while striking out 5, and also didn't walk anyone or hit any batters with the 101 pitches he threw. He didn't get the chance for a second consecutive complete game, though, as Scott Schultz, who hadn't seen action since his 7 1/3 inning effort in Oregon St.'s 14 inning 4-3 win at Seattle last Monday came in and needed only 11 pitches to quickly close out the win that improved the Beavers to 34-8, and 14-4 in the Pac-12.

Wetzler improved to 4-1 for the season, and Twomley, who took the loss for USC, dropped to 2-5. The weekend sweep by the Beavers also dropped the Trojans to 16-26, and 8-13 in the conference. 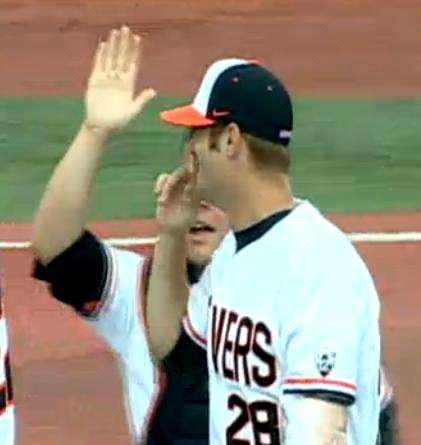 Ben Wetzler is congratulated by Jake Rodriguez on another strong Sunday performance.

A smaller crowd than had turned out for the first 2 games of the series of 2,547 went home much happier than in the last 2 seasons against USC, as the Beavers had lost their last 2 series with the Trojans.

It was a good weekend for the brooms, as the Oregon St. softball team claimed a 2-1 win over Arizona this afternoon as well, which was the first ever sweep of the Wildcats by the Beavers in softball.

The Beavers continue to hold a percentage points advantage in the Pac-12 race, but still trail Oregon by 1/2 game though, as the Ducks also completed a sweep of Stanford, with a 4-3 win over the Cardinal.

Oregon St. will have the week off, with no mid-week games before next weekend's visit by California for another conference series.