Memo to Self: Balconies are not bathrooms.

The suspension of Boise State QB Joe Southwick has taken a strange turn. Apparently, he was accused of urinating off a hotel balcony. He is adamant this didn't happen; so much so, he took a polygraph to prove it and wants to be allowed to play. So not only is Boise State's #1 QB not playing, he is causing a stink about it, making an even bigger distraction? Advantage: Beavers.

Despite all of this, the Broncos are still not allowing him to return. Bah humbug.

Speak of the Broncos' quarterbacks, their QB coach is a very familiar face to Mike Riley and OSU fans, despite his generic name.

Brandin Cooks is driven by a deeper, more personal motivation than many. OregonLive has a video interview with Cooks as well.

With DJ Alexander out for the bowl game, OSU's younger linebackers are going to have to step up. His primary backup, Caleb Saulo, did start for him against USC and had nine tackles.

Sean Mannion and Brandin Cooks are looking to get back in sync. ESPN's Andrea Adelson has a video interview with Cooks about his success this season, the Biletnikoff, and his future.

OregonLive also has an official game preview of the Hawaii Bowl. 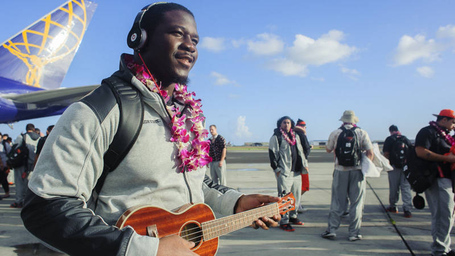 DT Edwin Delva was ukulele-ready when the Beavers arrived in Hawaii, though.

Here's the video of the arrival in Hawaii, and dinner the first evening:

Oregon State's football team makes at least one 2014 preseason Top 25 list, one of six Pac-12 teams to do so.

A Hawaiian high school football coach has some insight into why Oregon State does so well recruiting in Hawaii. Former Oregon State lineman Skippa Diaz, a Hawaiian native and current resident, also shares his thoughts on the matter.

CNNsi's Stuart Mandel makes his prediction for all 35 bowl games. He has Oregon State winning by three touchdowns. Also from CNNsi, Martin Rickman provides an amusing year-end review of the college football season. It's funny, although not particularly Beaver related.

The game wrap up stories from Monday's basketball win over George Mason from Oregon Live and the Gazette-Times. The GT's story is from the AP news wire; did they not send anyone to Hawaii?

Angus Brandt's injury is far less serious than initially thought. That is very good news for Oregon State's hopes of not finishing in the cellar.

Even Duck fans in the Eugene government say there are more Oregonians at OSU than U of O.

The first baseball poll of the preseason is out, and Collegiate Baseball has the Beavers ranked 4th in the country, behind Cal State Fullerton, Mississippi State, and LSU. Other ranked Pac-12 schools include Oregon, UCLA, Arizona State, Arizona, and Stanford. First pitch is February 14. Collegiate Baseball has five Beavers selected to their preseason All-America teams; Michael Conforto was selected to the first team; Andrew Moore, Ben Wetzler and Dylan Davis to the second team, and Scott Schultz made the third team. That's two more than any other school had selected to the three teams combined.

The womens' basketball team took two games out of three in the Duel in the Desert tournament in Las Vegas over the weekend. Although they lost a close game to Creighton in the opener, they beat host UNLV, and beat the tar out of Clemson on the final day of the tournament. Also remember that, on Sunday, Notre Dame visits Gill Coliseum to take on the Lady Beavers. If you're ever going to check out a women's game, that seems like a good candidate. Tipoff is at 2pm.

Season and single meet tickets for the gymnastics team are now available.

Cleveland Browns are nothing if not creative in their approach to hating their teams. (SFW)

As always, vote in the poll below, and go Beavs! Hoping everyone has a safe and enjoyable holiday, and may you get everything you asked for, including a Beaver victory.