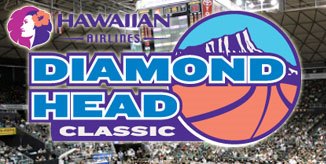 Oregon St. lost their opener in the Diamond Head Classic, and maybe more, as Akron jumped out to an early lead, and went wire to wire, staving off a mid-game Beaver rally, and pulling away to an 83-71 win. That wasn't the worst of it though, as senior captain Angus Brandt went down a minute into the second half, with an injury to his right knee, the same one he suffered a season ending ACL tear in a year ago.

Brandt, who had his career best game in the Beavers' last outing, posting a game high 27 points in Oregon St.'s 76-67 win over Toswon last Wednesday, had to be helped to the dressing room, unable to even put weight on his right leg, and his family was summoned from the stands shortly thereafter.

Brandt underwent an MRI immediately after the end of the game, but Oregon St. head coach Craig Robinson didn't have results yet in the postgame press conference.

Akron zipped out to a 10-0 lead in the first 3 minutes before Brandt could break the ice for Oregon St., with his only points of the game, and the Zips extended the lead to 16-2 on back to back 3 pointers by Nyles Evans.

"I thought we played into their hands, and took some ill-advised shots early," Robinson felt.

The Beavers began to rally, with a 6-0 run, but it was slow going, and Oregon St. didn't get as close as 6 points until Roberto Nelson nailed a pair of free throws just past the midway mark in the first half, making it 22-16 Akron.

Demetrius Treadwell was real trouble for Oregon St., as he had 9 points and 5 rebounds already at the under 8 minute tv timeout, especially given that Devon Collier, Oregon St.'s #2 scorer after Nelson, only had 1 point at that point.

Oregon St. patiently continued to chip away though, cutting the deficit to 26-21 on a fortunate basket by Nelson, after he made Akron pay for what appeared to be a missed traveling call. The Beavers got within 4 on a layin by Olaf Schaftenaar 3 minutes before the break, and cut the deficit to 3 points the first time on a Nelson 3 pointer.

Daniel Gomis, who wound up Oregon St.'s second leading scorer behind Nelson in the first half, with 5 points, pulled the Beavers within 33-30, and a Collier free throw made it a 2 point game.

Treadwell answered with a basket, giving him a game high 16 points in the first half, but Nelson nailed another 3 pointer at the buzzer to give him 14, and pull the Beavers within 1 point, down just 35-34 at the half. 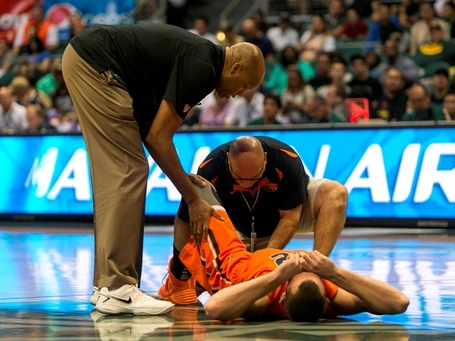 Brandt going down a minute after the break took some wind out of Oregon St.'s sails, and Evans' 4th 3 pointer of the game put the Zips back up by 6 points, leading 42-36 a minute later.

Challe Barton was fouled shooting a 3 pointer, and made all 3 free throws, but the Beavers committed 4 turnovers in the first 4 1/2 minutes of the second half, and the Zips still led 44-39.

Pat Forsythe's basket made it 48-39 Akron and forced coach Robinson to take a timeout 7 minutes into the half, and the Zips rebuilt their lead to double digits again on Deji Ibitayo's basket at the 12:15 mark.

With Brandt gone for the game, and neither Nelson nor Collier scoring, the Oregon St. bench, and Daniel Gomis specifically, did provide a spark. Gomis delivered back to back assists, and then made a driving layin to pull the Beavers within 51-45 with 11 minutes left. But Gomis then picked up back to back fouls, his 3rd and 4th, within 15 seconds of each other at the midway mark in the second half.

Evans buried his 5th 3 pointer, but a 4-0 Oregon St. run kept the Beavers within 5 as the clock wound under 9 minutes to play.

It was an odd sight, as Nelson and Collier, the 2 leading scorers in the Pac-12, and the leading scoring duo in the country, were sitting next to each other on the bench, but Cheikh N'diaye's tip in pulled Oregon St. to within 3 points, only down 56-53 with still over 7 minutes left to go.

It was as close as the Beavers would get though. Reggie McAdams answered with a 3 pointer, and though Nelson and Collier returned for the stretch drive with 5:35 left, Oregon St. could never get the game under a 2 possession margin again, as Akron was willing to trade baskets, be they field goals or free throws.

Collier didn't get his first basket from the floor in the game until there was only 3:05 left, which made it 68-63, and only added 1 more field goal, a dunk with 1 minute left, which got him into double digits, but with only 10 points in the game.

Nelson finished with a team high 20 points, but didn't score from the field in the second half, with half his points coming on 10 of 11 free throw shooting.

Akron made 11 free throws in a row, and 13 of 14 down the stretch to put the game away, before Ibitayo's lob dunk put the icing on the 12 point win on the Zips win in the first ever meeting between them and the Beavers.

7 of the free throws were by Quincy Diggs, who had 11 points off the Akron bench. Evans was the other player in double figures, with 17 points.

Treadwell finished with a double double for Akron, posting a game high 24 points, including 10 of 13 free throw shooting, and a game high 10 points, doubling the total of any other player in the game.

Gomis played his best game yet, finishing with 9 points, and 5 rebounds, matching Collier for the team lead. Barton also finished with 9 points.

"I thought our second team handled it great, but they had to try to get out of trouble our starters got us into twice," Robinson said.

It marked the end of another Oregon St. streak, as it was the first time the Beavers have lost with President Obama watching. The first family, part of a strong crowd of 8,694, sat right behind the Oregon St. bench.

That crowd, however, didn't include the Oregon St. football team, who had a practice scheduled in conflict with the game. After all the efforts to get both the football and basketball teams, and the few fans who could afford to make the trip, all in the islands at the same time, and given that the basketball tournament time schedule has been known since last summer, its odd that the practice schedule wasn't crafted to avoid the unnecessary conflict.

Akron improved to 6-2, and will play the 9-0 Cyclones immediately following the Oregon St.-George Mason game. Both games will air on ESPNU.

The Zips are a solid team from a good program, one that has reached the MAC championship game 7 years in a row, and posted at least 22 wins in each of their last 8 campaigns. They physically overmatched the Beavers early, and were able to control both Collier and Nelson much of the evening.

The prospect of possibly having to continue without Brandt is not an encouraging one.

"As soon as he went down I knew something was wrong," Gomis said. "It was the same thing as last year."