Oregon State did just enough to pull out the 79-73 victory over Portland, led by Roberto Nelson with 24 points.

The first half went as mostly expected, even including a blown rotation leaving a Portland player open in the corner to open the game. The Beavers would recover though, and started pulling away on a series of steals and decent defense. The Pilots were confused by a series of zone looks by the Beavers and committed turnover after turnover which led to an Oregon State 10 point lead.

Sloppy play would ensue with the Beavers going back and forth with the Pilots, but neither side was able to take control. They both continued to trade baskets until the end of the half where the Beavs forced a missed shot, but were unable to gather the rebound, allowing a putback to Riley Barker. The Beavs went into the locker room leading 41-33.

It was still messy when the second half began, the Beavs continued to fail to rotate to open shooters and the offense began to stagnate. The Beaver offense had done okay so far, but they had masked some of their halfcourt woes with all of the transition opportunities. When Portland stopped making as many mistakes, they began to catch back up whittling down the lead until they finally caught up, tying the game at 59.

This is when Hallice Cooke and Roberto Nelson came to the rescue. They started forcing turnovers again, starting with Nelson reaching high for a pass and leaving it for Cooke to lay it in. The Beavs forced a miss from long range and it was answered by a missed pull-up by Cooke, but he made up for it by stealing the ball high and dunking it at the other end. The zone continued to get sliced apart without the turnovers though, and the Pilots kept hanging in there, getting the score to 65-69.

Roberto Nelson would hold the lead then, hitting two threes to answer to Portland's scores and then missing his heatcheck, but the ball was snatched up by Victor Robbins, who was then fouled. He would then go and miss the foul shot, he ended up 3-7 from the line on the night. Portland could not muster up enough to overcome the Beavs, despite continued free throw inaccuracy from OSU. The Pilots would get the score down to a four point lead at 77-73, but after a timeout Olaf Schaftenaar threw the ball down the court to Roberto Nelson who was wide opened and put the game away with a six point lead, 79-73, which would be the final score.

Hallice Cooke looked great down the stretch, solid ballhandling, solid defense, and even flashed the ability to create his own shot. I have no problem with replacing Challe Barton in the starting lineup with Cooke for the rest of the season. 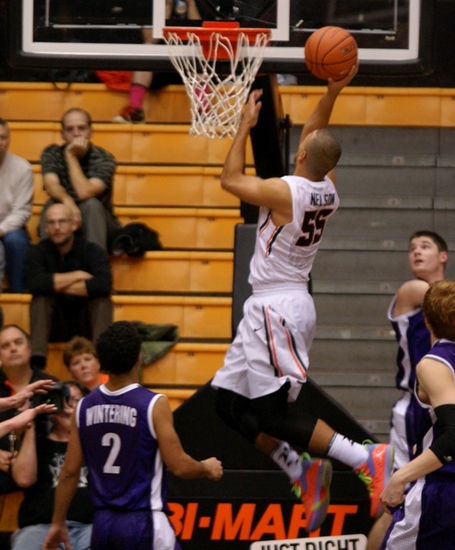 Roberto Nelson, above, was far and away the best offensive player for OSU, creating his own shot, finishing in traffic, and helped set up several of Angus Brandt's shots as well. He needs to be the focal point of the offense at this point, he is clearly the best scoring option. Nelson finished with a game high 24 points.

Gomis and N'diaye flashed some potential in the first half, with Gomis really being active and getting the ball, even creating a putback opportunity for himself. N'Diaye did not play long, but he stayed vertical and did not try to do too much. I have some hope here. 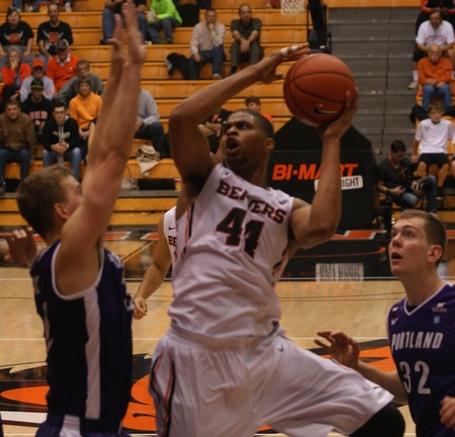 Devon Collier, above, and Brandt were both serviceable, but not much beyond that, though both posted double doubles. They made some of their chances, but they got outmuscled on several rebounds.

Collier, in his first action of the season, after setting out both exhibition games and Sunday's opener against Coppin St. for violation of unspecified team rules last spring, had 11 points and 11 rebounds. 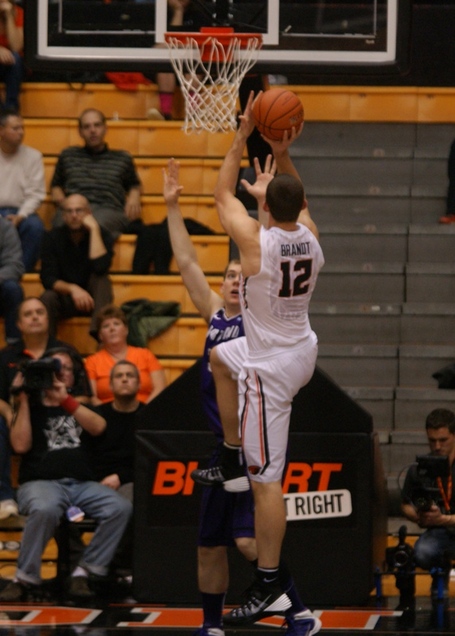 Jarmal Reid is slow. Barely looked interested. Barton was marginally more interesting; he did not really leave any impact on the game. Duvivier had several mistakes and just never got a lot of looks.

Victor Robbins is improving, but he still forces things. An improvement certainly, and lots of good hustle, but several mistakes in the zone as well.

Portland was led by Ryan Nichols, who had a double double, with 14 points and a game high 13 rebounds, and Bobby Sharp, who came off the Pilots bench to for 18 points, including 5 of 11 on 3 pointers.

While Oregon St.'s interior defense was improved, their problem with giving up open 3 point looks continues to be their biggest defensive issue.

The Beavs did not play a great game, they were essentially strictly in zone looks, only moving to man to man a few times, which somewhat stymied the Pilots, but they left so many shooters open that it hardly felt like a good performance. That said they did hold on, so they do deserve a little credit for the win.

Oregon St. (1-1) travels to College Park, Maryland, Sunday to face Maryland. The Terapins (1-1) came back from trailing Abilene Christian 30-29 at the half to pull away to a 67-44 win tonight.

Portland is also 1-1 after the loss.