Final Thoughts On The Return Of The Men Of Troy

Share All sharing options for: Final Thoughts On The Return Of The Men Of Troy

Oregon St. meets up with the USC Trojans for the first time in 3 years tonight, the 2 year hiatus a product of the Pac-12 schedule rotation that will also make it nearly a 5 year gap between visits to the Coliseum for the Beavers when they travel to LA next year.

Given the heated battles with often national significance, how much the fan bases put this rivalry on another level, and how much money is involved (between $75 tickets and guaranteed primary national tv coverage), that's surprising in the modern sports marketing era.

But never mind what hasn't happened, tonight the Beavers and the Trojans meet in the proximity of Halloween, which are all the reasons Oregon St. need to make it an "Orange Out", literally.

The Beavers can lock up a winning season with a victory, while the Trojans can get within 1 game of becoming bowl eligible (USC plays 13 regular season games, and therefore need 7, not 6 wins) in a year where they didn't make it to October without firing a coach.

Somehow, it seems unlikely "Interim" USC head coach Ed Orgeron will allow any of the Trojans to be asleep on the bus rolling into town this time.

This could be a repeat of last week's style of game for Oregon St., where the Beaver offensive line could not protect Sean Mannion from the Stanford pass rush, as USC is just as good at sacking opposing quarterbacks as the Cardinal. The questions are whether the USC secondary can do as good a job of keeping the action in front of them, and whether Oregon St. head coach Mike Riley can keep his head on 4th down.

I'll be surprised if the answers aren't "Not as well and Stanford did" and "Better than he did against Stanford." So the Beavers should be able to post more than 12 points, though the Trojans have been rock solid defensively when an Arizona team isn't involved.

Even banged up to the point of playing walk-ons, the USC offense is better than most of the Stanford squad though, and Cody Kessler is settling into being another quality Pac-12 quarterback. And so the Oregon St. defense is going to need another strong night. Were it not for the 3 game winning streak in games at Reser against the Trojans, I'd be inclined to believe the Beavers come up with a better game on both sides of the ball, and the curse of the "Great Pumpkin" will continue. But streaks are hard to keep up, so its not hard to see this one ending here.

Except its even harder to see Sean Mannion coming up short yet again, or Brandin Cooks having a second game where he's shut down, at least so much as against Stanford.

Beaver Believer's Keys To The Game:

1) Protect Mannion. The Cardinal did not let Mannion beat them last week because they brought the heat and it was coming nonstop. Mannion to his credit never looked rattled, but there was no time for the long developing routes that OSU normally runs. He was sacked 8 times, and was hurried many more. The USC defensive front is just as capable as Stanford, which should concern Beaver fans. The offensive line needs to stop making mistakes both physically and mentally, and the coaching staff needs to help as well. Leaving in one of the tight ends to block would help as well, Tyler Perry and Kellen Clute are not nearly as good of receivers as Caleb Smith, who is questionable for the game, and Connor Hamlett, who just had knee surgery. A premium needs to be placed on getting Mannion a chance to throw the ball.

2) More fly sweep. Or rather at least more fly sweep action. The Beavs did not run a lot of fly sweep action against Stanford, and it might have helped open up the Stanford defense more. With the threat of running on the edge the Stanford defense would have had to second guess crashing down the line, maybe helping to protect Mannion. It also would have given Cooks more chances to make some plays as well. It seemed like he disappeared for long stretches, and giving him the ball on the fly sweep more often would have gotten him involved.

3) Force turnovers. USC is not great offensively, Cody Kessler is poor, the running game is struggling, and their skill players are injured. The Beavers should be able to force third and long situations and force Kessler into making mistakes. Rashaad Reynolds and Steven Nelson are among the national leaders in interceptions and they need to add to those numbers.

USC is also concerning because of their talent. If they play a strong game of mistake free football, they can beat just about anybody. I think the Beaver defense has been improving lately though, and that USC will struggle to move the ball, giving the Beavs enough time to hammer at the Trojan defense until they crack. 27-13 Beavs.

We get to rush the field again after we beat the Trojans again, right?

This game scares me. It feels like Beavers fans are way too confident in the team this week purely because of the location and opponent. USC's improved since the beginning of the season, and the Beavers are still battling injuries sustained in the past few weeks.

Hopefully we see a return of good pass blocking, despite the strength of USC's front seven. Truthfully if Mannion has time in the pocket this should be a W. I don't think USC can get the coverage sacks that Stanford got, and because of that, I think the Beavs offense returns to its former glory.

The Oregon St. defense continues to improve, and should play another good game, holding the Trojans down enough for the potent Beavers offense to win on the big stage.

Also, it's time to "Crank it like a chainsaw!" 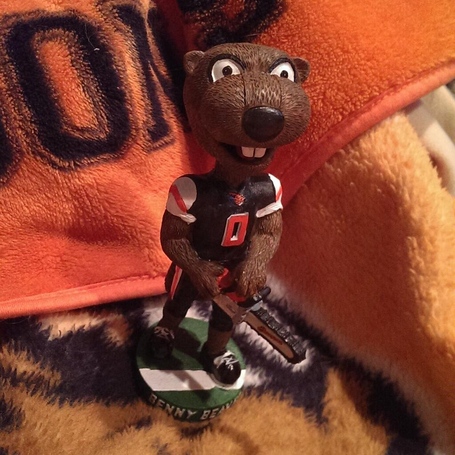 Happy belated Halloween, and here's to a big time bounce back for the Oregon State football team to keep the Reser House of Horrors theme going for the USC Trojans!

My questions and thoughts for this game:

Bounce back from the loss to Stanford starts with the offense? Stanford's defense did a number on the Beavs high flying passing attack last weekend, but it also was a game where you had the sense that yes the Cardinal defense is as good as billed, but that also the OSU offense had their chances too. We actually saw small glimpses of a run game!

And if Mannion and his offensive line could have adjusted a bit better to a faster and more aggressive defense, one suspects a slightly different result. That said, the offense did still drive down in the last seconds of the game to make it a down-to-the-wire scare for Stanford.

USC seems to bring into Reser another possible fast and aggressive defense, so what have the Beavs learned? Has Mannion learned to have a quicker in-the-pocket-timer? Will we see more down the field throws that we were so used to in the first half of the season? Have we seen maybe something slightly click with the rushing game and Terron Ward? And who will fill in (and how well) for Kevin Cummings?

Defense continuing to build? As good as Stanford's defense is, their offense is a work in progress, and the Beavs on defense took some nice advantage of that fact. That said, yes there were some defensive lapses in that loss, but really the defense bounced back and adjusted well all night, and were instrumental in having that game come down to the wire. Can they continue to build on this, especially against a SC offense that seems to be a good match up again for the OSU defense?

Special teams? Put this out there last week too, but this week I feel there is a bit of a twist to this component of the game. The twist here is that you have two teams that seemingly have underachieved on special teams returns. Both teams have star athletes in the return game, but have not produced much at all. Will Marqise Lee (if he is back) or Brandin Cooks finally really break through in this game (Cooks did have that brief break out with the final punt return to set up the Beavs nicely in the final minute against Stanford)? Will Victor Bolden find his return game finally?

USC? Well we are all aware of the season the Trojans have had, including of course losing their coach after the blowout loss to ASU. Since then USC has seemed to find some defensive swagger (indeed if anything was going semi-right for Kiffin, it was his defense until that ASU game), and the team seems to be an interesting match-up for the high powered passing attack of Oregon State.

USC's defense is slightly weaker against the pass, but is strong in relying on interceptions to keep things in check, and with their rush. This then will be interesting against a QB and an offense that throws a lot and does not turn it over much in the passing game. Plus with the mid-season coaching turnover how much of an element of surprise does USC have over OSU in this one? Is there any since they have not played each other since 2010?

I was pretty disappointed by the loss to Stanford last weekend, but I also think there were some positives that can be built upon in this game. First, the OSU defense does seem to be improving each week, and this match up seems again to be a favorable one for the schemes they play. Second, sure Mannion had a tough game and was not as sharp as usual, but that was a fast and tough defense he was up against, and he took a lot of hits. Mannion though kept his head, and did not turn the ball over, and also was able to take over and get the Beavs in position to tie that game at the end. I know I like to get into this mode at times, but I feel this is a great game for Mannion and the offense to take things personally and out on the Trojans.

The game to me personally seems like one that could go low scoring smash-mouth OR possibly the other way, with some points being put up on the board. Again much of this I believe revolves around what the OSU offense learned from their loss last weekend.