Oregon St. continues their Pac-12 campaign opening 3 game home stand with a late night start for TV purposes, as the Beavers host Arizona St. This weekend's games are the only meetings of the regular season between the Arizona and Oregon schools, due to Pac-12 schedule rotation.

The Sun Devils are one of the hottest teams in the conference, and one of the biggest surprises of the season, having already significantly exceeded last year's win total of 10. Arizona St. is also well on the way to surpassing their Pac-12 win total from a year ago, when the Sun Devils only snagged 6 wins, before seeing their season end in the first round of the conference tournament.

Arizona St.'s only losses were to then #14 and now #13 Creighton, who has only 1 loss, in the Las Vegas Invitational, and to DePaul. The Sun Devil's Strength of Schedule is only 152, but that's still far better than Oregon St.'s 294 (out of 347 DI programs). Tonight is, however, only the 2nd true road game this season for Arizona St., and that was a winter break game at Texas Tech.

A big part of the reason is the substantial improvement of senior combo guard/small forward Carrick Felix. The 6'6" Felix, the centerpiece of this year's Sun Devil squad, has improved his point production from 10.5 points per game to over 15, but has also upped his rebounding, 3 point shooting, assist, steal, and blocked shot production. Felix is Arizona St.'s leading rebounder, and is averaging just under 8 per game.

Felix had a game high 20 points to lead Arizona St. to a 65-56 come from behind win over visiting Colorado Sunday night, keeping the Sun Devils in a tie with undefeated and 4th ranked Arizona (who will be at Gill Saturday evening) and UCLA.

Another Arizona St. player the Beavers will have to keep an eye on is 5'10" freshman guard Jahii Carson. Carson only came up with 5 points in the win over the Buffs, but leads the Sun Devils in both scoring, with 16.7 points per game, and also assists, at 5.4 per contest.

The Sun Devils aren't all about guard play, however. 7'2" junior center Jordan Bachynski nearly posted a double double in the win over Colorado, with 16 points and 9 blocked shots. Bachynski, Arizona St.'s second leading rebounder, was right on average, with 7 boards. Jonathan Gilling, a 6'7" sophomore forward from Denmark, did get a double double against the Buffs, with 12 points and 10 rebounds.

Arizona St. is a thin team, however, often going only 6 or 7 deep, at least as far meaningful minutes goes. And the Sun Devils aren't a great shooting team. They hit a respectable 46% of their shots, 56th in the country, but they make less than 34% of their 3 pointers, and less than 63% from the free throw line.

Beaver Nation may not recognize the Sun Devils either, as Arizona St. coach Herb Sendek has switched away from the matchup zone defense he's used almost exclusively forever, never mind just during his tenure in Tempe, and has gone to a man to man defense this season. So all those scouting notes from recent years against the Sun Devils can be tossed aside, at least on one end of the floor. 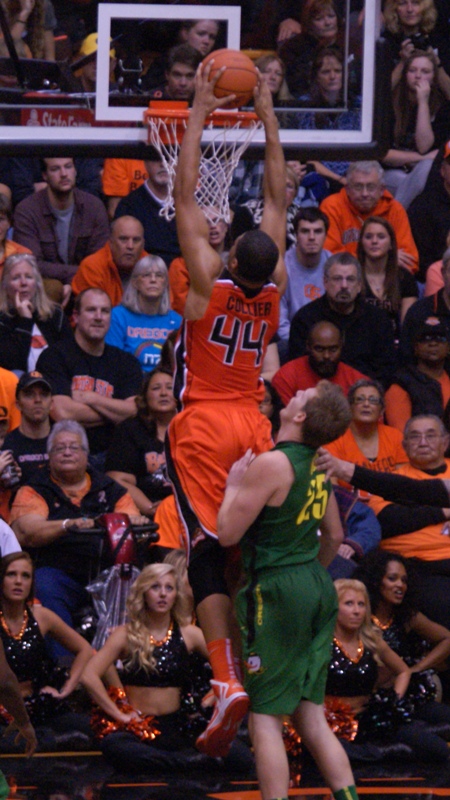 Oregon St. got off to a good start against Oregon, but didn't put the Ducks away, and suffered a serious scoring drought in the second half, losing what had been 6 point leads. Collier's personal 7 point scoring streak retied the game, but the Beavers lost momentum, and Oregon pulled away for the 79-66 win.

Starks combined with Roberton Nelson for 60 points against Oregon, and the Beavers will need another solid backcourt scoring effort with Bachynski clogging up the inside, potentially curbing Oregon St.'s 7" shorter Joe Burton, and Collier, who will be playing, and getting little relief, with Eric Moreland out due to a strained back.

With only 6 games left in the friendly confines of Gill Coliseum after this weekend, and that date with Arizona on the horizon, its a huge early game in the conference race for Oregon St. A loss could set them up to effectively be 4 games down in the Pac-12 race after playing only 3 games.