Oregon St. went wire to wire to win their CBI Tourament quarterfinal, literally shooting down TCU 101-81. The Beavers shot 69% from the field in the first half, and 65% for the game, including 54% on 3 pointers.

Playing without their head coach Jim Christian, who had to stay behind in Ft. Worth to deal with a family medical emergency, TCU got off to a slow start, falling behind by double figures less than 7 minutes into the game, when Jared Cunningham sank a 3 pointer for an 18-8 lead.

The Horned Frogs only got the deficit back into single digits one time, on a layup by Kyan Anderson that pulled TCU within 29-20 with just over 8 minutes left in the first half.

The Beavers answered with a 7-0 run, capped by a 2 + 1 by Angus Brandt, and Oregon St. opened what would turn out to be their biggest lead of the game, 25 points, until they hit the century mark, on Joe Burton's layup that put the Beavers ahead 53-28 a minute and a half before halftime.

But TCU answered with a pair of 3 pointers, by Garlon Green, who led the Horned Frogs, with 21 points, and Anderson, who was a high school teammate of the Beavers' Eric Moreland, and added 16 points, making it 53-34 at the break.

TCU cut the deficit down to 17 points with the first basket after the break, but Oregon St. quickly rebuilt the lead to 21 points, on a steal and layin by Cunningham.

The lead hovered around 20 points until Oregon St. got a little lackadaisical, and a 6-0 TCU run forced Oregon St. head coach Craig Robinson into a timeout.

Roberton Nelson made 1 of 2 free throws, but then a 3 pointer by Anderson pulled the Horned Frogs within 13 points, trailing only 73-60 with 11 minutes still to go.

It was as close as TCU would get, though, and Oregon St. commenced rebuilding their lead.

"They started playing defense again after that," Robinson noted. "We had been conserving some energy, with finals, and by then it was apparent we would have another game on Wednesday. It was time to get back to it." 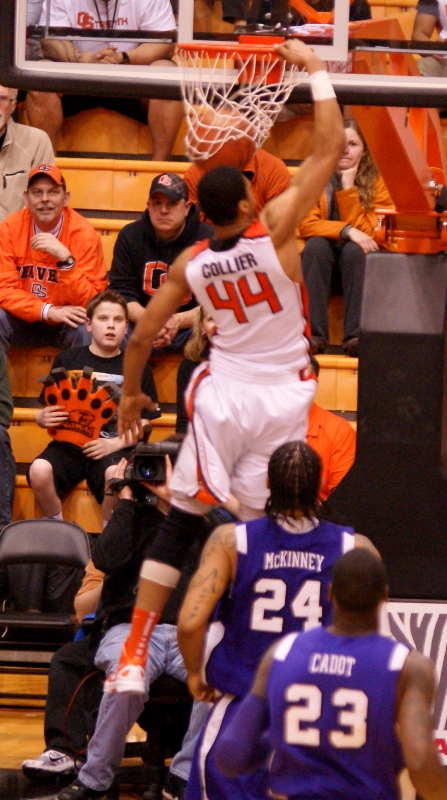 Green hit a jumper, but that prompted Brandt to go on a personal 8-0 run, started with back to back 3 pointers, which set up the moment that most aroused the crowd of 2,315. With the Beaver Dam chanting "Cha-Lu-Pa! Cha-Lu-Pa!", Burton pulled down a rebound and fed senior captain Kevin McShane, who had missed Oregon St.'s CBI opening round win over Western Illinois with a hip pointer, and McShane delivered the dunk that pushed the Beavers to the 100 point mark, and the game's largest margin, 27 points, with still over 2 minutes left.

"I want to make a point to thank `Beaver Nation' for their support tonight," Robinson added. "It would have been real easy for people to stay at home on a Monday night; and I want to especially thank the students who took time out of their final exams to be here."

It was the fourth time Oregon St. has topped 100 points this season, more than any Beaver team has ever done in one season. It was also McShane's 100th game.

After that, bench clearing ball broke out, and Oregon St. cruised to the win. 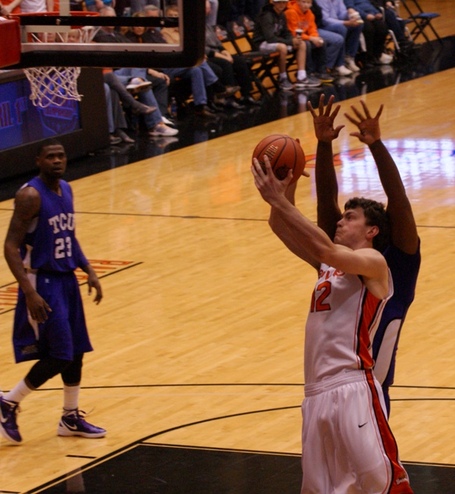 The game was a tale of offensive efficiency.

"I was feeling pretty good tonight," Brandt said in an understatement. "I felt fresh after a couple of days off,"

The Beavers had 58 points in the paint.

"We've never done that since I've been here," Robinson noted. "I can't ever remember a team I have coached or been a part of in any way having 58 points in the paint."

And while the Beavers were blasting away, TCU was struggling from the field, especially in the first half, when they shot only 31%, making just 12 of 39 shots.

For a team that plays very little defense, that was fatal.

In addition to the offensive fireworks, Moreland had 2 blocked shots, including the one below, and tied Scott Haskin's single season record of 68. 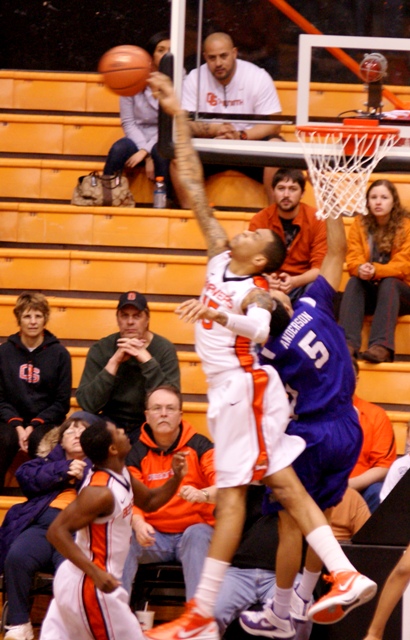 In addition to Green and Anderson, J.R. Cadot finished with 15 points, and Hank Thorn was also in double digits for the Horned Frogs, with 11 points. TCU finished the season with an 18-15 record.

While the offensive showing was impressive, enthusiasm needs to be tempered somewhat. TCU is not a good defensive team, and playing without their head coach had to have hurt both their preparation and their in-game adjustments.

Oregon St. has now won 6 of their last 7 games, and improved to 21-14 for the year. The Beavers will host Washington St. Wednesday night at 7 PM in the CBI semi-finals. The Cougars pulled away from Wyoming tonight in Pullman, defeating the Cowboys 61-41, behind 25 points by Brock Motum, and 16 by Abe Lodwick.

Washington St. beat Oregon St. twice in the Pac-12 regular season, winning 81-76 on New Year's Eve in Spokane, and 83-73 in Corvallis. The Beavers beat the Cougars 69-64 in the first game of the Pac-12 Tournament, however.

In the other CBI quarterfinals, Butler beat Pennsylvania 63-53, and Pittsburgh downed Princeton 82-61. 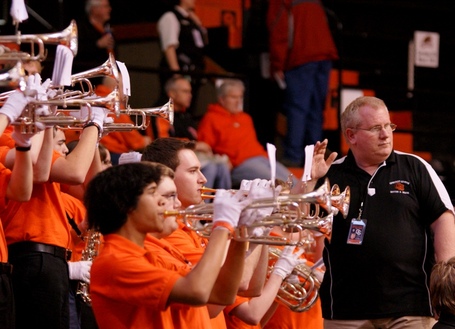