Washington St. used a 17-3 run in 5 minutes right before halftime to blow open what had been a close game for the first 15 minutes of the game, taking a 46-31 lead to the locker room. The Cougars gradually built the lead out to as many as 19 points on 2 different occasions in the second half. Oregon St. rallied with an 18-9 run, but the Beavers had dug themselves into such a deep hole they never got closer than 9 points, and Washington St. hit 8 of 10 free throws in the last 1:19 to take a 10 point win, their first Pac-12 road win of the season.

The primary problem for Oregon St. was once again their moths to the light defense, where collapsing and congregating defense around the ball left Washington St. with someone one or two passes away wide open for an uncontested shot. And it happened on both the perimeter and the baseline.

"We have to resign ourselves to the fact that we have got to get better on defense," Oregon St. coach Craig Robinson said.

Compounding the problem was Oregon St.'s inability to figure out how to get their front court working effectively offensively. Though Devon Collier finished with 11 points, the quartet of Angus Brandt, Joe Burton, Kevin McShane, and Eric Moreland combined for only 7 points. Burton and Moreland were shut out.

"Unfortunately, you can't play this game with 5 guards," Robinson said.

The Beavers' struggles squandered a spectacular effort by Jared Cunningham, the Pac-12's leading scorer, who hit a career high 5 three pointers, on his way to a game high 33 points.

In addition to his third 30+ game of the season, Cunningham also co-led Oregon St. (with Collier) with 6 rebounds, snagged 3 steals, and had a pair of assists and a pair of blocked shots.

"It was a shame to not get the W given the great effort Jared gave," Robinson felt. "He was one of the few who seemed ready to play tonight." 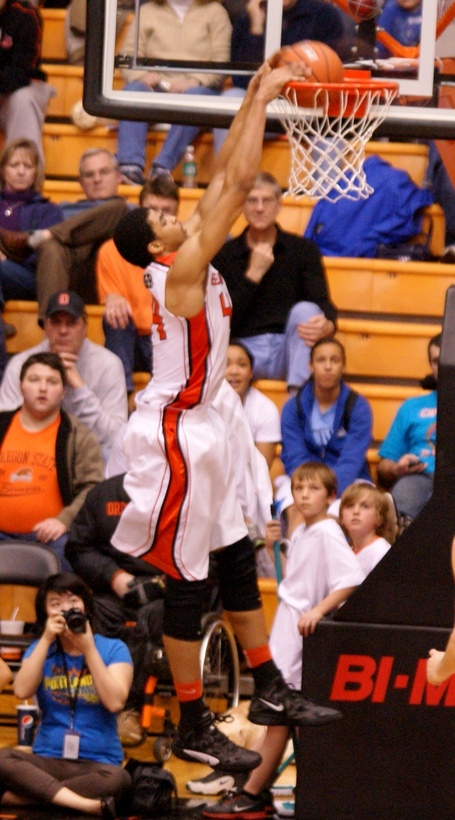 Devon Collier, above, throws down 2 of his 11 points. 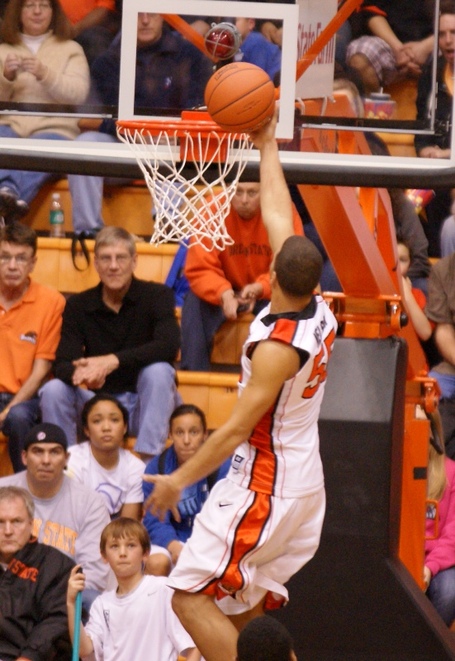 Roberto Nelson, above, came off the bench with 14 points, and was the only other Beaver in double figures. 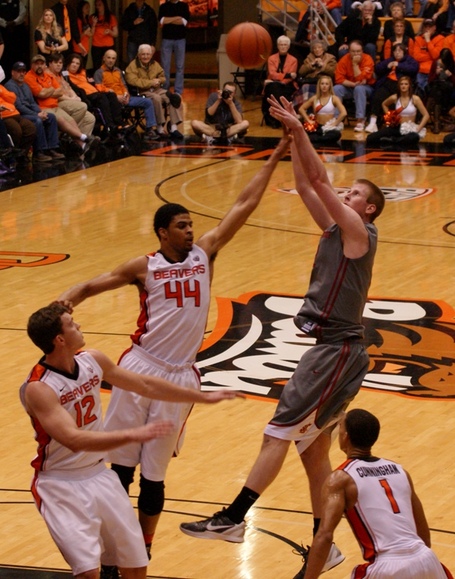 Meanwhile, the Cougars were going wild. Brock Motum, above, led 5 Washington St. players in double figures, with 24 points. D.J. Shelton, the nephew of former Oregon St. great Lonnie Shelton, hit every shot he put up, from both the field and the free throw line, and finished with 14 points. Shelton and Motum also grabbed 9 rebounds apiece, with Shelton snagging 6 on the offensive boards. 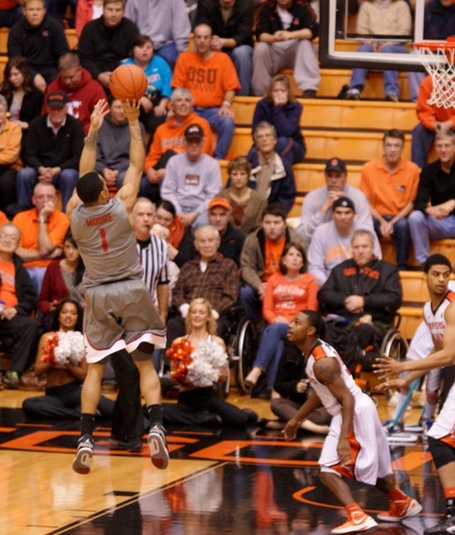 Reggie Moore, above, chipped in a double double, with 10 points and 11 assists, while Marcus Capers had 12 points, including the lob dunk below. 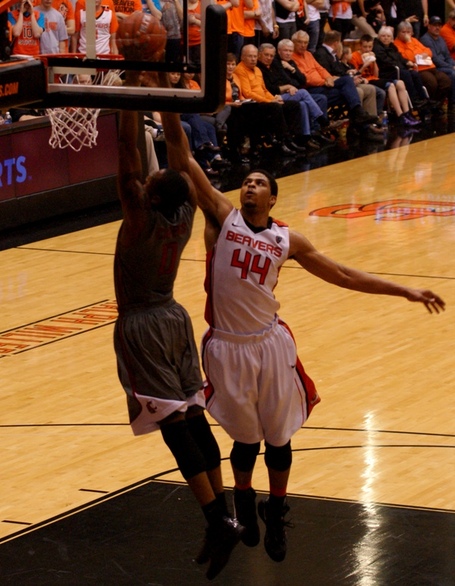 DaVonte Lacy, below, added 10 more for the Cougs. 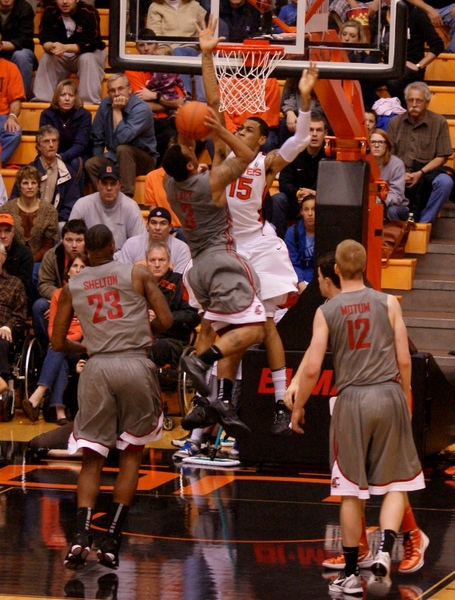 Ahmad Starks appeared to be off to a good start, hitting 2 of his first 3 3 pointers, but then missed his last 10 from beyond the arc.

"It was our best performance on the road this season," Washington St. coach Ken Bone said. "I don't know if it was as much our defense as it was it didn't seem like Oregon State played as well as they are capable of playing, though.''

It was surprising that Oregon St.'s offense struggled so much against Washington St. after doing well in the front-court in the teams first meeting. It was almost infuriating that their defense was again unable to even slow down Motum, who should have had an Oregon St. defender within arms length of him all evening, even while he was sitting on the bench.

And until the concept of weak side defense sinks in, opponents willing to make the extra pass will continue to get copious amounts of uncontested shots, most of which will go in.

The performance disappointed a surprisingly large crowd of 5,782 for a week night second-division game, a significant number of whom quit on the team well before the game was finally put away by the Cougars' late free throw shooting.

The mental toughness to win tough games is something more than just the Oregon St. players have yet to learn.

Oregon will host Washington St. Saturday. The Ducks are tied with Arizona (17-8, 8-4) and Colorado (16-8, 8-4) for third place in the conference race, one game behind California and Washington, after the Wildcats beat the Buffs 71-57 tonight in Tucson.