Share All sharing options for: Oregon St. Pulls Away From Washington St. In Pac-12 Tournament Opener

It was a game of big early runs that turned into a close, slug it out affair for most of the game. But the Beavers had one last 11-1 run late that pulled out the win over the Cougars in the opening game of the Pac-12 Tournament.

Oregon St. got off to a great start in the high noon showdown. Sparked by Ahmad Starks hitting 4 of 5 3 pointers, the Beavers used a 13-0 run to jump out to a 24-8 lead less than 8 minutes into the game. Starks would hit only 1 free throw the rest of the way though, and Washington St. stormed back with a 15-2 run of their own to pull back within 26-23 less than 6 minutes later, and the battle was on.

Abe Lodwick's 3 pointer put the Cougars ahead 39-38 at halftime, and Washington St. took their largest lead of the game, 44-38 2 minutes into the second half on a pair of Brock Motum free throws.

The Oregon St. front court of Devon Collier, Eric Moreland, and Joe Burton combined for the Beavers' next 18 points. Moreland gave the Beavers the lead 52-51, and tied the game at 54-54 with still over 11 minutes left.

The Beavers then suffered a scoring drought over 3 minutes long, but their man to man defense that had struggled earlier bailed them out.

After Motum's basket put the Cougars back ahead 56-54, it would be almost 3 minutes before Washington St. scored again, and nearly 8 minutes before Oregon St. allowed one last layin by Mike Ladd. The cougs scored only 5 points in the next 10 minutes.

Collier's dunk re-tied the game at 58-58 with 7 minutes left, but there was another over 3 minute long scoring drought in Oregon St.s' future.

Starks, who had made 34 of 37 free throws on the season, but had gone 8 games without going to the line before taking a single free throw against Colorado, made only 1 of 2 at the line, leaving the Beavers still a point behind.

Collier connected on a pair of free throws for a 62-60 lead with 2:18 left, and the Beavers led the rest of the way.

Former Oregon St. great Lonnie Shelton had already watched Eric Moreland, who finished with a game high 12 rebounds, erase his name from the Beavers' record book for most rebounds in a season by a freshman, and then saw his nephew D.J. Shelton make only one of 2 from the line, leaving the Cougs still a point behind.

Burton ran off the next 5 points, and Collier and Cunningham both made 1 of 2 at the line to put the Cougars away. Washington St. made 3 of 5 free throws in the last 9 seconds, but it was too little too late.

Collier was the game's leading scorer, with 19 points, narrowly edging Motum, who had 18 to lead the Cougars.

Burton came off the bench for the Beavers with 15 points, including 5 of 7 shooting, and 5 of 6 at the line, and also 5 rebounds, a steal and an assist.

Starks finished with 13 after the 12 point fast start, missing his last 6 shots. 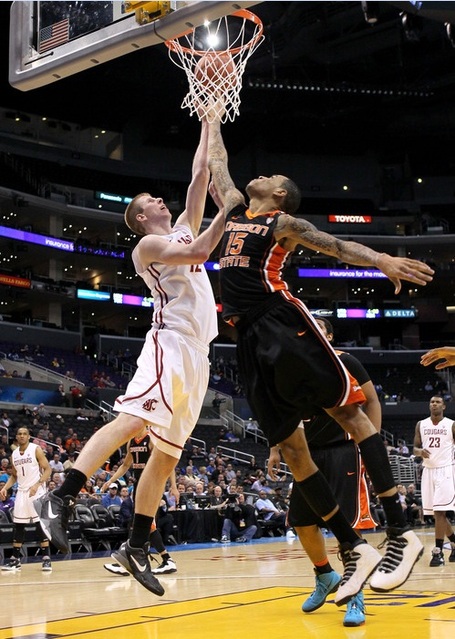 Moreland just missed a double double, with 9 points. Moreland, above checking a shot by Motum, also had 2 blocked shots, 2 assists, and a steal.

Reggie Moore did post a double double, with 10 points and 10 rebounds for Washington St., and Marcus Capers was also in double figures, with 14 points.

Cunningham, the Pac-12's leading scorer, struggled offensively, with only 4 points scored in 38 minutes, ending his streak of 22 consecutive games in double figures scoring. He did have 4 asssits, 3 rebounds, 2 steals, and a blocked shot.

"That shows something about our team," Moreland felt. "He's the conference's leading scorer, and today, he's got nothing. But he still played defense, and the rest of us made the adjustments necessary."

The stat of the game was the difference in shooting between the first and second halves for Washington St. The Cougars took 25 shots in each half, and made 17 of them in the first half, but only 7 in the second half.

"Jared does a lot of things for us besides scoring," Oregon St. coach Craig Robinson added. "What he didn't do on offense, he picked up on defense, and that was really important. For us to win a game with Jared having just a so-so offensive game shows the growth of this team." 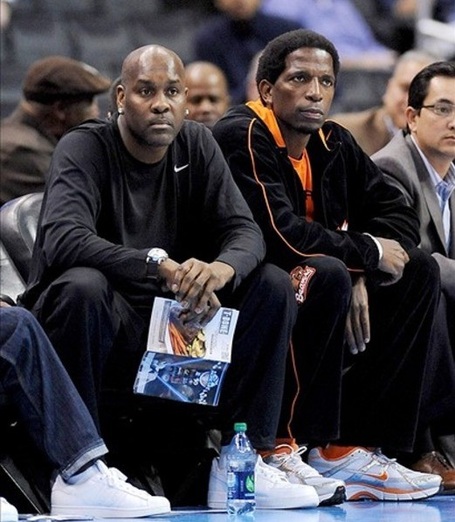 players pointers, Cougar players a hard time, and calling out errors by the officials.

AC even noted he and Gary had jerseys on under their shirts, and were ready to play

if needed. Fortunately, the Beavers got the job done without resorting to that.

"We'll have to slow down (Terrance) Ross, he's a pretty good player," Moreland said, " and keep (Tony) Wroten off the boards."