In Pac-12 football news, Washington got a late field goal and a goal line stand to edge Oregon St. The Huskies under new defensive coordinator Justin Wilcox tackled better, and as in most football games, won the turnover battle with one more fumble recovery. An important stat when neither team led by more than a touchdown.

OK, that lead isn't exactly correct (Wilcox was not seen in Corvallis). The turnover stat, however, is accurate. And in a game where neither team ever took control for more than a couple of possessions, or led by more than 6 points, which happened only once for each team, any given advantage could be argued to have made the difference. In all, there were 11 ties, including 31-31 at half time, and 13 lead changes in the hand to hand combat drill.

The reality is 8,027 fans, the most this season for any game in Gill Coliseum, and a national television audience, got to see a very physical 40 minutes of basketball, which ended with one team, the Huskies, having 1 more basket that the other, the Beavers.

Jared Cunningham led all scorers, with 23 points for Oregon St., while Terrance Ross led Washington, with 21. Ross also led everyone in rebounding, with 13 boards, a big component of the 6 rebound edge the Huskies had over the Beavers. 5 were on the offensive end, where Washington also had a +6 advantage. It didn't translate into an advantage in second and subsequent chance points, but it did prevent Oregon St. from potentially winning the game on that aspect. 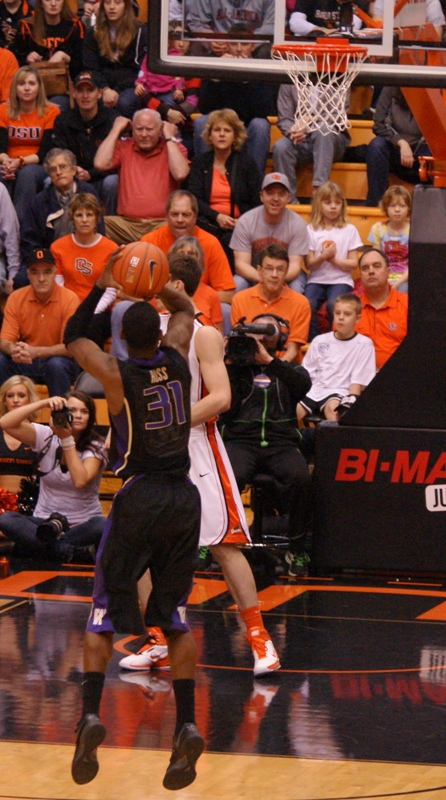 The key contributing players came off the bench for both teams, as C.J. Wilcox added 17 points, including 7 of 9 at the free throw line, for Washington, and Oregon St.'s Eric Moreland, below, and his 7'5" reach caused havoc with 5 of the Beavers' 7 blocked shots (Collier claimed the other 2), 9 rebounds, and 6 points. 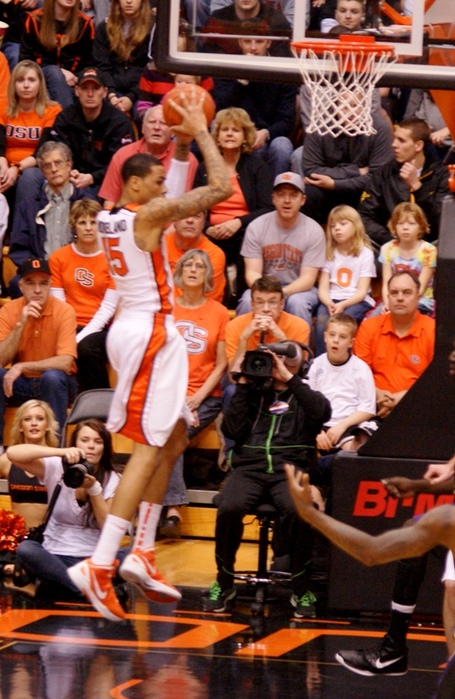 Oregon St. coach Craig Robinson unveiled a 3 guard offense, with Challe Barton inserted into the starting lineup, and only used 3 big players briefly well into the second half. Despite the size advantage Washington had, which was further extended by Robinson's move, the Huskies weren't able to overly leverage it. Washington center Aziz N'Diaye was limited to 6 points and 3 rebounds, though he did have a couple of momentum maintaining dunks (below). 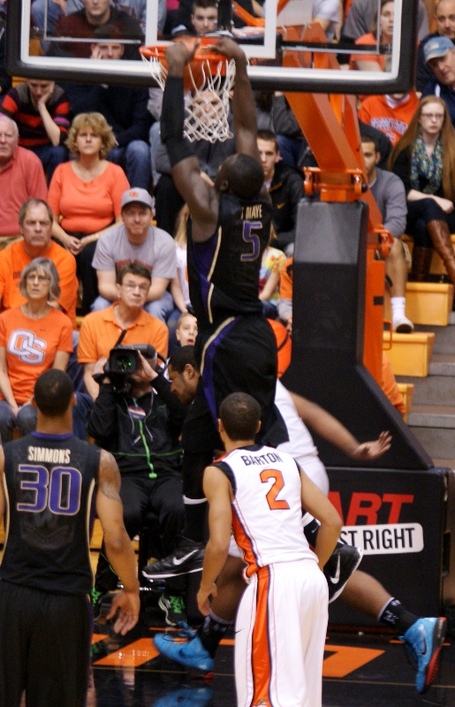 "I thought it worked pretty well." Robinson said. "We held them to 31 points in the first half. I was worried about their 3 guard lineup, which is chock full of potential NBA guys. So I wanted to make sure that we could stay in front of them. The amount of speed we were able to put on the floor made the 1-3-1 (zone) pretty effective."

N'Diaye got into foul trouble, picking up his second foul more than 8 minutes before the break, and the Huskies' Darnell Gant fouled out in only 10 minutes of floor time.

"Although this win may not have looked pretty, somehow we were able to get the job done," Washington coach Lorenzo Romar noted.

Oregon St. also held Washington to 35% shooting, the Huskies' lowest percentage so far this season, and 29% on 3 pointers, while hitting 41% of their own shots. The 2 shooting stats that illustrate where the Beavers could have won, and why the Huskies did win, were Oregon St.'s shooting only 25% on 3 pointers, including 2 misses in the last 2 minutes, one by Cunningham with 11 seconds left, and free throw shooting. Oregon St. missed an opportunity to have the lead at the break when they missed 8 of the 12 free throws they got in the first half.

Washington made 24 of 35 from the line, while Oregon St. only got to the line 26 times, and made just 16 of them, an odd statistic given both teams were assessed the same number of personal fouls. Which was probably at most half of the foul-worthy contact plays that occurred.

Most fans prefer the "let them play" style to whistle-happy officiating, but there comes a point where missed contact approaches complete lack of control. And given that both teams saw players knocked down and out with no call of any sort, prompting heated blasts from both Robinson and Romar, it was clear that this one was out of control at times. 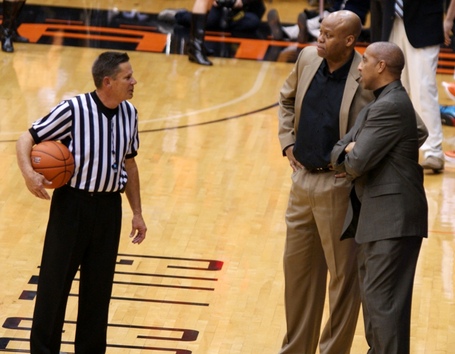 "We would like a word with you about the way you are treating our boys."

In addition to Cunningham, Oregon St. got 16 points from Devon Collier, who was a perfect 4 for 4 in the first half, 14 from Ahmad Starks, and 12 from Angus Brandt, below. Outside shooting needed to be better in order to get the win. Starks was 40% from the field, and on 3 pointers, and Cunningham was only 35% from the field, making just 7 of 20 shots. Roberto Nelson never got on track offensively, missing all 6 shots he took, including 4 3 pointers, and finished with only 1 point. 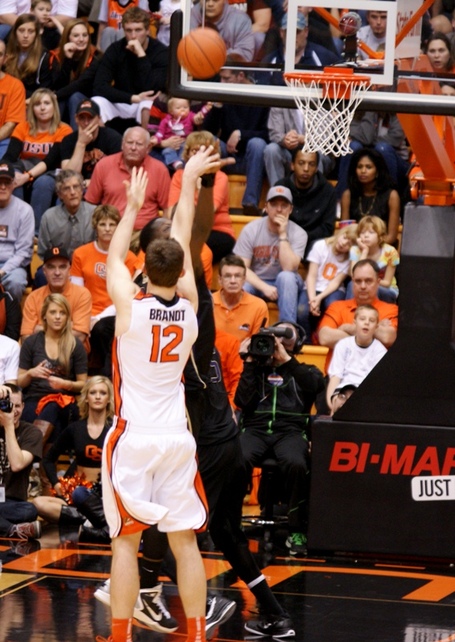 Ross' shooting wasn't great either, as he was only 7 of 21. The only other Husky in double figures besides Ross and Wilcox was Tony Wroten. Oregon St. did a good job defensively on the Huskies' leading scorer, holding Wroten to only 12 points, and just 3 assists.

The win was huge for Washington, after having been blasted by Oregon 82-57 Thursday night. It allowed the Huskies (17-8, 10-3) to maintain a share of first place with California (20-6, 10-3), though the Golden Bears do hold the season tie-breaker.

"We're not watching film of that last game," Romar said. "Throw Thursday's one out, that was not the Huskies."

The bounce back win gave Washington 5 wins in their last 6 games as they head home to host the Arizona schools next weekend.

Oregon St. (15-10, 5-8), themselves coming off a double digit 83-73 upset loss Thursday to Washington St., shrugged off that defeat as well, as far as energy level went. But coming up just short still meant getting swept at home for the weekend, and swept for the season by both Washington schools. It was also the Beavers' 3rd loss in their last 4 games, and leaves them tied with the Cougars for 8th. place in the Pac-12 as they head for the Bay Area next.

"This is a tough game for the guys in the locker room to digest because I thought their effort was terrific," Robinson said postgame. "It was disappointing that we didn't make enough plays to win that game."

Oregon St. visits 6th place Stanford (17-8, 5-6) Thursday, and California on Saturday night. The Beavers upset the Golden Bears 92-85 in the team's first meeting of the season, but then lost to the Cardinal 103-101 in the epic 4 overtime game 2 nights later.