Texas showed Oregon St. the difference between a good team and a good program, twice rallying from 10 points down in the second half of the 20th. Valero Alamo Bowl. It took over 57 1/2 minutes, but the Longhorns finally overhauled the Beavers when David Ash found Marquise Goodwin, whom Oregon St. had mysteriously decided to let run free with no over the top coverage, for the game winning touchdown.

It was the culmination of an evening Oregon St. spent trying to give away what was potentially a signature win, and possibly a top 10 ranking to end the season, and they finally got it done.

Though it was the game deciding play, it was far from the only one that Oregon St. can (and better) look back on with regret, but hopefully also a learning opportunity.

Blown reads, unforced turnovers, missed tackles, bad clock management at the end of both halves, missed blocks, bad decisions on kickoff returns, and a sprinkling of bad playcalling at critical times all contributed to spoil what should have been a win that was in the books early.

Oregon St.'s defense outplayed Texas' offense most of the night, and repeatedly bailed out the offense, but ultimately wore down under pressure. The Beavers' game plan was overall very effective, and was undone by execution errors several times. And in the surprise of the night, Oregon St. for most of the game, and even after home-state star Storm Woods, below, who ran for 118 yards and 2 touchdowns before getting banged up enough to have to come out of the game, out-rushed Texas. 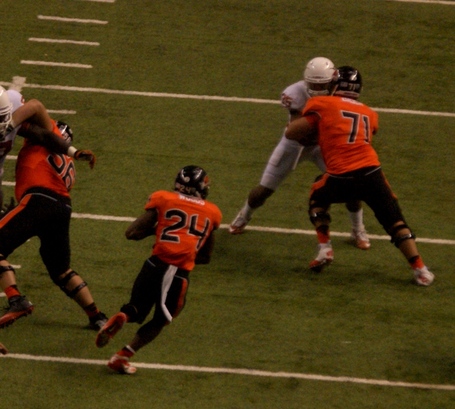 But the Longhorns capitalized on Beaver errors, while Oregon St. squandered opportunities all night to put the game out of reach. Texas has good athletes, but Oregon St. demonstrated they had better ones for better than 3/4 of the game. But there is a difference between being better athletes and being a better team. Which the Longhorns clearly were.

When you don't give up a 1st. down, and only allow your opponent 23 yards, in the first quarter. you should open more than a 1 score lead. But that didn't happen, even though Scott Crichton's blocked field goal bailed out the Oregon St. offense after the first of the three interceptions Cody Vaz gifted to the Longhorns.

Texas' first touchdown shouldn't have either, because the possession shouldn't have ever happened. Oregon St. only committed 2 enforced penalties all night, but an off-sides on 4th and 4 allowed the Longhorns to run a reverse, also to Goodwin, for the touchdown that knotted the game at 10-10, when the Beavers should have had the ball. 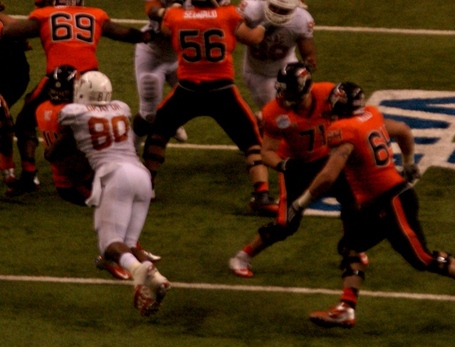 Vaz suffered easily the worst game of his career, getting sacked an incredible 10 times, including above, as well as throwing 3 of the 4 interceptions he has ever thrown. Blocking breakdowns happened on some of them, but in several cases, Vaz had time to at least get rid of the ball, if not make a play, but instead stood around way too long. He was clearly overwhelmed by the scope and scale of the stage he was on, and it had a lot to do with his completing only 15 of 28 passes, and for no scores.

Initially, the Oregon St. game plan was confusing and overwhelming to Texas, and the Beavers' in-game adjustments to the Longhorn's defensive line and linebacker play produced one of their better rushing nights of the season. 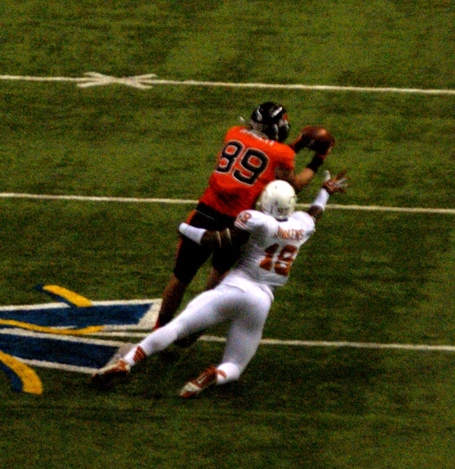 But strong starts to both halves ultimately fell apart. Connor Hamlett, above, was Oregon St.'s leading receiver, with 5 catches for 70 yards, most of it early. But why did Oregon St. head coach Mike Riley go away from Hamlett after it became obvious that Texas couldn't handle the hulking Hamlett? 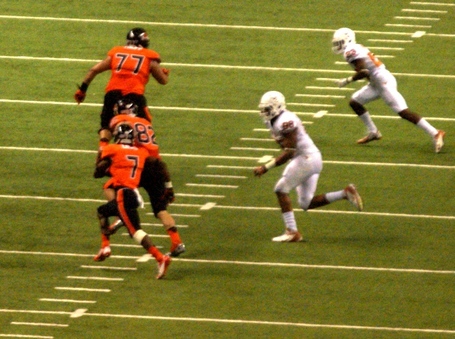 Oregon St. fans didn't see enough of Brandin Cooks making plays like the one above.

And why wasn't more of an effort made to make Brandin Cooks a key part of the Oregon St. offense? Cooks had 3 catches for 31 yards, and 1 fly sweep for 15. That wasn't nearly enough touches, though another of Vaz's interceptions that led directly to an easy Texas touchdown on a short field came with Cooks the target.

Texas slanted their coverage to take away inside routes from Cooks, almost daring Vaz to throw over them to reach Cooks. But Oregon St. didn't respond with multiple receiver routes to scrape coverage off.

The SEC crew that generally did a good job, in high contrast to the calls Pac-12 teams have become conditioned to seeing, botched the clock at the end of the first half, but Riley and Vaz both botched it even worse, leaving a timeout on the board as time ran out.

Similarly, Riley conceded the game when it would have been possible to force Texas to at least run a 4th down play, and possibly affording Oregon St. at least one last hail-Mary type play, opting instead to leave a timeout on the board again. This after inexplicably calling overly conservative plays that ensured the Longhorns would have the chance to pull the game out that they capitalized on. Oregon St. had a net loss of 4 yards for the 4th. quarter.

In the end, it was still a surprisingly good season for Oregon St., who went 9-4 when even posting a winning record was something most would have considered overachieving before the year began. But it was also the third game, along with the losses at Washington and Stanford, where the Beavers went on the road, for the most part out-played their opponent, yet found ways to blow 4th quarter leads that should have been even bigger than they were.

Meanwhile, Texas "salvaged" a 9-4 season by not quitting and going home when it looked like Bevo was about to be turned into tonight's bar-b-q on the Riverwalk.

Credit the Longhorns for that, but also hand Oregon St. a mirror, because they need to look in one to see where their problems lie.