Oregon St. accomplished all of their objectives Saturday in the 77-3 obliteration of Nicholls St., and they did so about as smoothly as could be expected under the circumstances.

Markus Wheaton got the career reception record, and even extended it to 123, with a touchdown catch that put an exclamation point on the first half.

The team set a new single game scoring record with 77 points, and didn't even unduly embarrass anybody in the process, as Coach Mike Riley used every imaginable combination of reserves, and actually got more points with mostly subs on the field in the second half than the first. This despite specific efforts to get Wheaton his career catch record at home, instead of in the Beavers' bowl game.

An announced crowd of 32,427 appeared to include some tickets sold early in the season than went unused, but a good portion of that number stayed long enough (and were even invited to move into the "good" seats that went unused; don't count on that happening again any time soon) to give Wheaton a rousing ovation when he put his name ahead of Mike Haas, and then James Rodgers in the record book (and those are some pretty good names!), and then again when Wheaton added a touchdown with his last catch of the day.

And while it wasn't a very good crowd, considering there was an Alamo Bowl representative in attendance that needed to be impressed, it still surpassed the crowd of 31K that turned out Friday night for the Pac-12 Championship game in Palo Alto. (Expect the conference to move the title game to Saturday next season; the dedicated tv window instead of getting lost in Championship Saturday isn't enough to offset the empty seats that result when you schedule a game for quitting time on a work day in a major city traffic snarl. 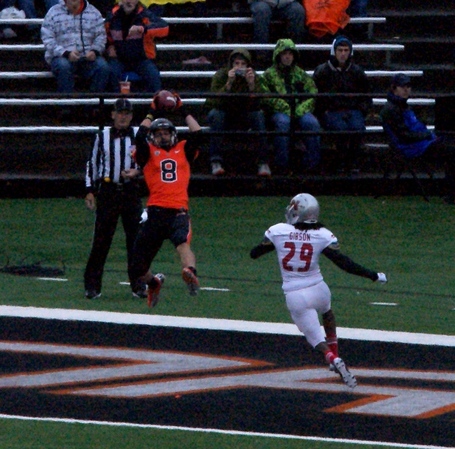 Oregon St. even accomplished various goals such as Brandin Cooks getting in, getting a catch, and getting out of the game before he could aggravate his sore knee, and getting touchdown catches for Kevin Cummings and Richard Mullaney, above, both of whom will have to become bigger contributors next year in Wheaton's absence, and Obum Gwacham and Jordan Jenkins as well.

It was good that a lot of the guys scored touchdowns, and a lot of the young guys played," Wheaton said. "That was way more exciting than anything else.

In fact, about the only blemish on the day that the Beavers scored on each of their first 11 possessions, before running the clock out on their final possession, was when Jenkins, an All-Pac-12 First Team Special Teams player, suffered a right ankle injury late in the game. This will bear watching as Oregon St. prepares for their bowl game.

Update: Jenkins' ankle is broken, and he will have to watch the Alamo Bowl from the sidelines. 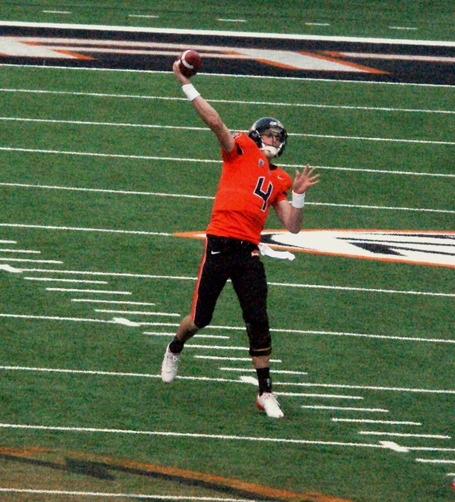 It's hard to read much into the quarterbacking numbers, where Sean Mannion, above, completed 20 of 23 passes, for 231 yards and 2 touchdowns, and Cody Vaz connected on 14 of 17 passes, for 190 yards and 3 scores, and even Richie Harrington completed 2 of 4, for 32 yards, because there are high school secondaries that could have done better than the 453 yards the Colonels surrendered through the air. But the fact that there were no interceptions thrown is a good thing to take from the day. The opportunity to get sloppy, or just suffer mis-communication, when 3 different quarterbacks throw to 13 different receivers, is enormous, and staying focused through yesterday has to please Riley. 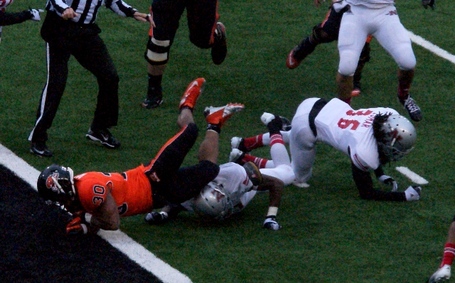 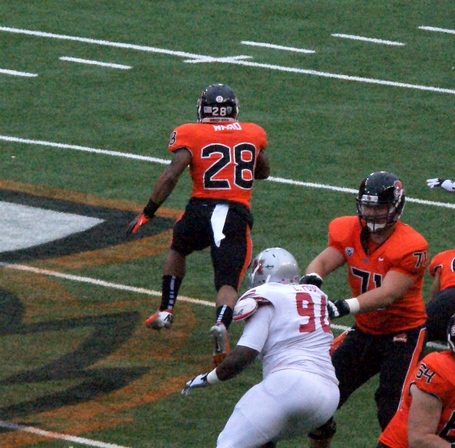 But again, the good news was no turnovers, and also that the Beavers executed the fly sweep well, with Wheaton getting 17 yards and a score, as well as both Mitch Singler andMicah Hatfield getting sweeps in as well as hauling in multiple catches.

Contrast that with the 4 turnovers Oregon St. got, including yet another Jordan Poyer interception, below. 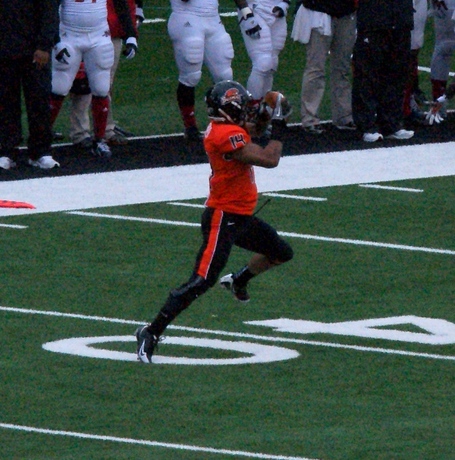 It was not unlike many of Riley's open practices, in that Oregon St. fans got to see their Beavers working on a variety of stuff. But it was also one last chance to send off the seniors on the football team and in the band, who have led not only the biggest turnaround in program history (the first team to improve from 1 year to the next by 6 wins), but will also be the first group of seniors to lead Beaver Nation (or ANY PCC/AAWU/Pac-8/-10/-12) to a bowl game one year after posting a 3 win season.

Which made it a pretty darn good day to be a Beaver, rain (again) not withstanding.