The Beavers fought back from trailing by double digits numerous times, but it was Kansas who escaped with the 84-78 victory.

Share All sharing options for: Reliable Releford Holds Off Beavers In Kansas City

Oregon State trailed Kansas by double-digits five separate times on Friday night in Kansas City, but proving they can play play with anyone in the nation, came back each and every time and eventually only lost by six. However, trailing by as many as eight points with under two minutes remaining would do the Beavers in, thanks to some clutch free throw shooting by Travis Releford, Ben McLemore, and Elijah Johnson down the stretch. McLemore would lead the Jayhawks with 21 points.

Freshman Jarmal Reid made his second straight start in place of the injured Angus Brandt, and the decision was a good one. Reid's defense was much improved, and while he only finished with a single steal, his ball-hawking style affected the Jayhawks' ability to drive inside immensely.

After getting down by 14 with 6:50 left in the first half, the resilient Beavers shocked the Sprint Center crowd, who thought it would quickly turn into a Washington State-Kansas type affair. But anchored by Roberto Nelson, the Beavers finished with a 20-11 flurry and went into the locker rooms trailing by three. 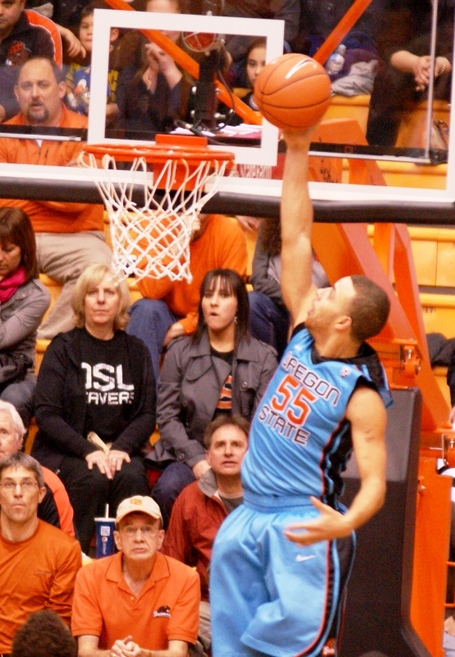 Nelson Was The Key To OSU's Late First Half Comeback. He Would Finish With 17 Points On The Night. (credit: Andy Wooldridge)

The first seven and as half minutes of the second half would be the turning point in the BMO Harris Bank Kansas City Shootout. The Jayhawks exploded for 21 points in that time period, and a struggling Beaver offense was settling for bad shots. But down 13, Oregon State fought back again.

Thanks to a pair of Ahmad Starks triples and a Joe Burton layup, Oregon State found itself down 78-73 with 1:30 remaining. The Beavers weren't done yet, and after a pair of Nelson made free throws, and a missed pair from Kansas' Kevin Young, Starks found Devon Collier for a slam dunk to make it a one possession game with just 15 seconds to play.

But you can't count on the tenth best team in the nation to miss two more free throws with the game on the line. and McLemore wouldn't, netting two perfect shots to put the game on ice for KU.

While the team and fans don't like moral victories, the Beavers played well and stayed with a great team in a hostile environment. That bodes very nicely for the future.