Oregon State gave up a 15 point lead late in the second half, but the Beavers rally to win it on a 10-2 run to close the game

For the second time in two games where Oregon State held a single digit lead with less than ten minutes left (New Mexico State being the other), the Beavers, playing not to lose, almost gave it all away. But stepping up in the absence of senior center Angus Brandt (more on him later), four different Beavers scored in the final two minutes to lead the team to an eight-point victory.

By playing in back-to-back games in less than 22 hours, coach Craig Robinson mixed up the Beaver rotation early and often in front of the 6,177 fans at Madison Square Garden. The decision proved to be a great one as OSU jumped out to a nine point advantage before even ten minutes had passed. Devon Collier had a monster 17 points in the first half, leading the team to a 39-28 lead at the half.

The second half started even better than the first one was, as Joe Burton scored the first four points to extend Oregon State's lead to 15. However, those would be the Beavers' final points for more than four minutes, a stretch that proved to be critical for Purdue's comeback chances. After bouncing between a seven and eleven point advantage, Purdue finally got the deficit down to five on an A.J. Hammons jumper with just over seven minutes to play. A Hammons and-one with 3:20 left made the score 56-54, and a pair of Hammons free throws a minute later pulled Purdue even, the first time the Boilermakers tied or led since the 13:25 mark in the first half.

In the middle of that Hammons run came an injury that could hurt the Beavers for months to come. With 5:20 remaining in the game, Angus Brandt collected a pass from Challe Barton at the top of the three point line. Brandt turned to fake a pass, but something went awfully wrong as he went down clutching his right knee. Brandt stayed down on the court in severe pain for several minutes before declining a stretcher and being helped off the court. Brandt will be evaluated by team doctors once the team gets back to Corvallis, but judging by how hard he went down without contact, the assumption can be made that he'll be out for a while.

Now, back to happier things. Tied at 56 with two minutes to play, Collier somehow forced his way through a triple team to get fouled as he missed a layup. The Bronx native netted the two free throws to put the Beavers back ahead for good.

Anthony Johnson air-balled a jumper at the other end for the Boilermakers, and after running down the shot clock, Eric Moreland swished a three three, his first field goal of the game, to put the Beavers up five with a minute to play. 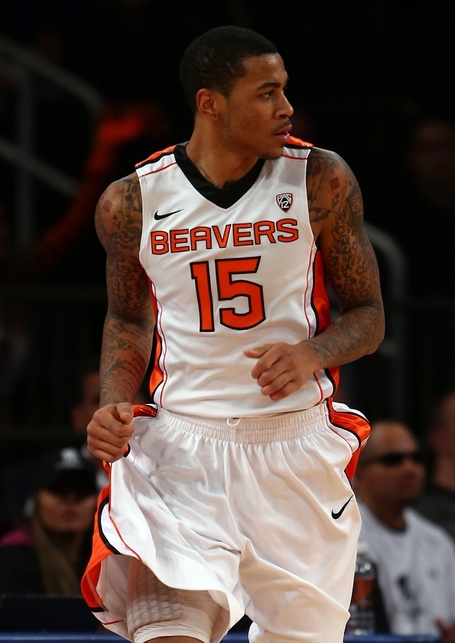 Moreland Celebrates After Hitting A Late Three To All But End The Game (credit: Elsa/Getty Images)

Purdue head coach Matt Painter called timeout to set up a play after the Moreland three, but a Donnie Hale turnover wasted the effort. On the next trip, instead of fouling, the Boilermakers forgot about Collier all alone in the paint. Ahmad Starks found him, and Collier slammed it home to erase any doubt about the Beaver victory.

Oregon State improved to 3-1 with the win and will face Montana State on Sunday, November 25 in Corvallis. Purdue dropped to 1-3 and will face UNC-Wilmington on Wednesday night in West Lafayette.