Oregon State is a pretty good basketball team - I'll get that out of the way first. Anytime you turn the ball over 20 times, get dominated on the glass, and fail time and time again to rotate on defense, and yet only lose by three to a possible tourney team isn't awful. But man was this one heart-wrenching.

The first half featured 20 minutes of solid basketball. The Beavers turned it over many times, of course, but Alabama's foul problems offset any advantages for either team. There were some cold stretches on both sides, and some where both teams couldn't miss. Back and forth Bama and Oregon State went, eventually for a total of 11 lead changes and seven ties.

One of the most pivotal stretches throughout the game came in the final five and a half minutes of the first half. Coming off an explosive left-handed dunk by Angus Brandt, a play where he also drew a foul, the Crimson Tide's Trevor Releford responded with an and-one of his own. That gave Bama a 29-28 lead, and less than five seconds later, Joe Burton turned the ball over and gave Releford another layup. Three more turnovers later, the Beavers went into the locker rooms trailing 35-32. And while the deficit wasn't big, the momentum lost in those final five minutes was more than costly.

Building on the momentum gained heading into halftime, Alabama came out in the second half and flat out dominated the Beavers. The Tide hit everything in sight (it didn't help that the Beavers constantly left shooters open on the perimeter), and the Beavers, of course, kept giving up offensive rebounds and turning the ball over.

But all of the sudden, down 14 with less than nine minutes remaining, things began to click in some unlikely places. Brandt has shown the ability to come up big in his time at Oregon State, but it's usually by knocking down a couple three-point shots in the corner. However, it was a new, tenacious Brandt that led the Beavs with a 5-0 run by himself through attacking the hoop. Brandt would finish with his first career double double.

Now with the deficit at single digits, it was freshman Jarmal Reid's turn, draining a baseline jumper to get the Beaver bench, and small Madison Square Garden crowd, into it.

Devon Collier, on his defacto homecoming night, decided it was time to take things into his hands in the final six minutes. Collier made the score 59-54 with a layup, the first of six points he'd contribute to Oregon State's final ten of the night. His pair of made free throws with 15 seconds to play pulled the Beavers even for the first time in the second half, but Rodney Cooper answered with the winning three in front of his own bench 30 seconds later. 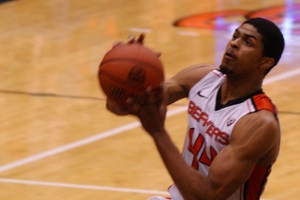 Collier Led The Beavers With 21 Points On Thursday, His Most Important Coming In Two Free Throws To Pull Oregon State Even With 45 Seconds To Play (credit: Andy Wooldridge)

After a Craig Robinson timeout with five seconds to play, Ahmad Starks put a cap on his awful night by rolling off a screen into the sideline, trapping himself between two Tide defenders and teammate Eric Moreland. The ball would be dribbled off of Moreland and out of bounds, all but ending the game thanks to the non-advancement of the ball on a timeout rule like the NBA has. Since Cooper missed the front end of his one-and-one, the rule would have come in handy for the Beavers with just two seconds remaining on the clock. But having to go nearly the length of the court proved to be fatal, as Roberto Nelson's three-point attempt never got close.

Oregon State dropped to 2-1 with the loss and will face Purdue on Friday afternoon (or evening) in New York City. Alabama improved to 3-0 and will face Villanova following the completion of our game.