Oregon St. Not Up To Challenge Of Stanford

Share All sharing options for: Oregon St. Not Up To Challenge Of Stanford

With the real possibility of a Rose Bowl on the line, Oregon St., who came into Palo Alto ranked #14, and standing at #11 in the BCS Standings, wasn't up to the challenges that Stanford, ranked #16, and shown as #14 in the BCS, presented.

It wasn't for lack of effort, or heart, given the 23 consecutive points the Beavers ran off, after being almost run out of Stanford Stadium in the first quarter. It also wasn't for a lack of opportunities, as Oregon St. won the turnover battle over Stanford, and first time starter quarterback red-shirt freshman Kevin Hogan, 4-1. 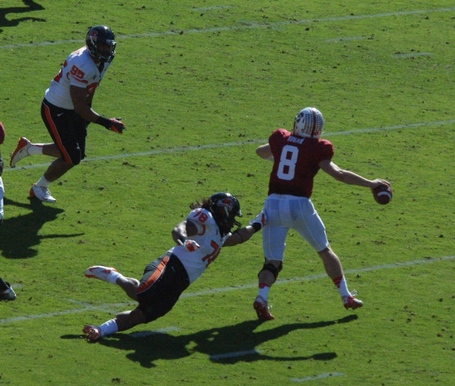 into a first down.

Which was one of the key factors in a game that featured the best defenses in the Pac-12, and figured to come down to turnovers. With a first time starter behind center, it figured that Stanford would likely lose that turnover battle, and sure enough, they did. But Oregon St. did very little with the turnovers, and Stanford proceeded to go win the game when they got the ball with their only turnover of the day, a gift on an un-forced fumble by the Beavers' Cody Vaz, who got the gig as starting quarterback back because of his ability to deliver touchdown drives in the 4th quarter, and not turn the ball over.

Yet Vaz, with no pressure on him, put the ball on the ground, and the game in Hogan's hands. Hogan put it in the hands of Stepfan Taylor, a proven Beaver beater, Ryan Hewett, another in the seemingly endless line of rhinoceroses that Stanford employees as tight ends, and finally, Zach Ertz, below, another of those rhinos, for the game winning touchdown pass. 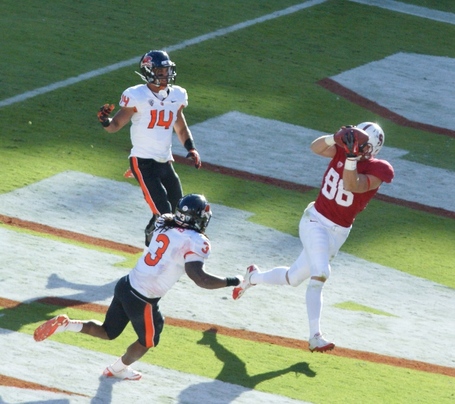 Things couldn't have started much worse for Oregon St., who was steamrolled in the first quarter, as Stanford out-gained them by near 200 yards. In light of that, being out-gained by ONLY 105 yards was something of a victory over the remainder of the game for the Beavers.

Not being prepared for what an opponent hit them with has been a frequent problem for head coach Mike Riley's teams in road games recently, most recently the only other loss this season, at Washington.

But unlike the debacle at Century Link, the Beavers at least adjusted relatively quickly, and answered with a strong middle 2 quarters. Oregon St. got their running game going well, using Storm Woods counter-cutting behind pulling and slant blocking linemen who found much more success using directional influence instead of trying (and failing) to go straight at Stanford. 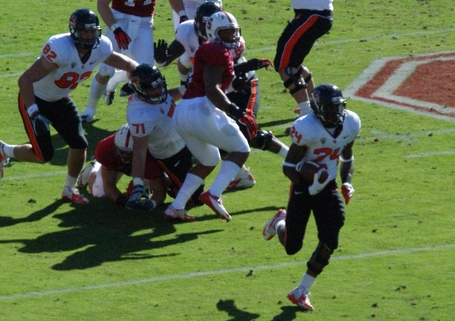 Woods, above, almost matched Stanford's Stepfan Taylor, below, in rushing, picking up 94 yards on 15 carries, while Taylor had 114 yards, on 19 rushes. 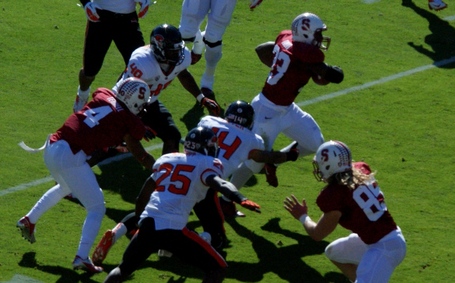 It was expected that Stanford would out-gain Oregon St. on the ground, which they did, 163 yards to 86, but Woods did his part pretty well. Both backs' best run went for 19 yards. The difference was almost all the usual affect of a mobile quarterback against the Beaver defensive scheme, as Hogan had 49 net yards despite sacks, while Vaz had a net -16.

What was not expected was that Hogan would out-pass Vaz, but the first time starter completed 22 of 29 tosses, for 254 yards and 3 touchdowns, despite the 2 interceptions, by Ryan Murphy and Rashaad Reynolds, while Vaz 23 of 38 passes, for 226 yards, with 1, and only 1, touchdown.

Despite 3 wins in his 3 starts, it was Vaz that looked like the inexperienced quarterback at times, and the 3 times the Beavers had to settle for field goals were instrumental in the outcome. 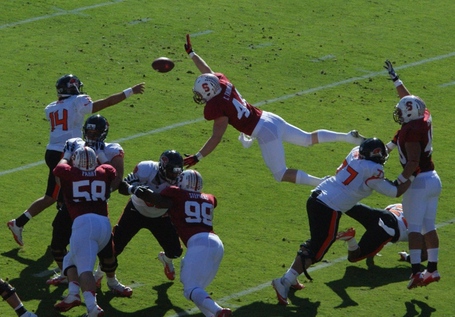 Vaz has work to do on pre-snap reads, and it showed on the second quarter play, above, where Vaz failed to recognize that Chase Thomas was un-accounted for, and rather than check into a play away from the overload, instead threw into it, got the pass batted down, and Oregon St. had to settle for one of those Trevor Romainne field goals. 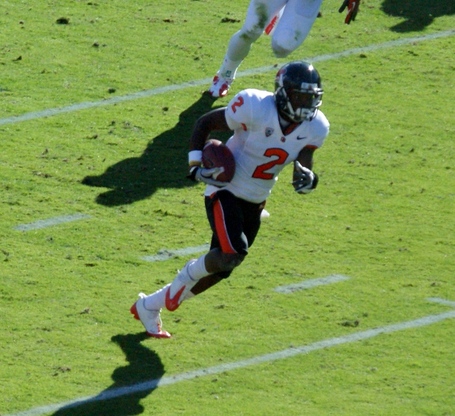 Both Markus Wheaton, above on his way to the third quarter touchdown that put the Beavers ahead 17-14, and Brandin Cooks, below, had 7 catches, with Wheaton picking up 91 yards, and the touchdown, and Cooks 82. 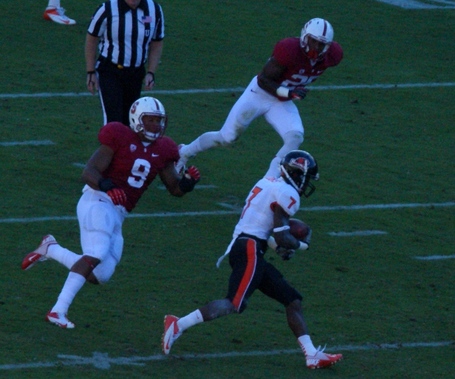 But the fly sweep was missing in action, run once and shown as a fake only a couple of times. And the Beaver defense couldn't control the Cardinal tight ends when they needed to. They did limit Levine Toilolo to only 1 catch, but Ertz had a game high 9 catches, for a Stanford leading 75 yards, and the game winner. And Hewitt, on his way below to the touchdown that put Stanford up 14-0 less than minute before the end of the first quarter, seemed to surprise Oregon St., with 4 catches, including the longest play of the day by either team exclusive of Taylor's 40 yard scoring scramble to end the third quarter. 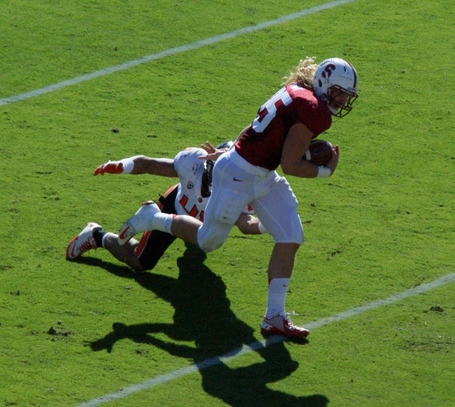 Tackling troubles were an issue early, but they really hurt on that Taylor romp. This should have resulted in a sack, 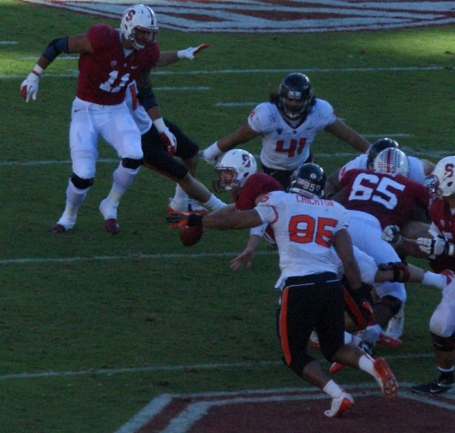 and should not lead to this 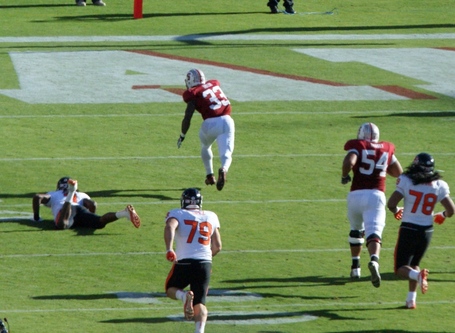 as Taylor broke 4 tackles on his way to a 40 yard touchdown.

"That was a great play he made, getting the ball to [Stepfan] Taylor late on a check-down over there - probably the play of the game," Riley said. "We were up two scores and he gets the ball, finds him, but just before he goes down and the guy scores a long touchdown that really changed the momentum at the time."

Game management at the end of the first half was atrocious, and only Jordan Williamson's missing a 51 yard field goal that had plenty of length wide left averted damage from awful clock management, and it led to substantial nervousness and dis-satisfaction from the large contingent of traveling Beaver Nation when Riley opted to punt on 4th and 2 at the Beavers' own 43 with just over 4 minutes to go, especially when Oregon St. got the ball back on their own 16 for the final drive.

The move was reasonable, however, given the field position, and that Oregon St. used their time outs on defense, getting the ball back with still 3:46 to go.

But the difference was a short, 31 yard punt by Keith Kostol, who averaged over 40 yards per punt, starting with one Jordan Poyer downed at the Stanford 7 yard line, and including a 67 yarder, while Daniel Zychlinski uncorked a 51 yarder that pinned Oregon St. deep for their final drive.

"I thought that maybe we could in some fashion turn the ball up the field after punting the ball," Riley said of the decision. "Maybe we'll get a better punt than we did and flip the field. And I knew if we could stop them, we'd have plenty of time, which we did. I think we ended up with 3:46 on the clock, which is plenty of time. It all worked out pretty good like that, but then we killed ourselves. We jump offside on second and one, we don't execute on a block, or get through on a route - they held us up, and Cody gets sacked, and we lose the game."

Notably, the penalty was one of only two whistled on the Beavers and accepted all day, but came at a very bad time, effectively taking numerous options away from the offense.

Still, losing a game you have a +3 turnover advantage in should never happen. Particularly when one came at the expense of Taylor, who suffered his first fumble of the year, and had handled the ball 262 times in a row without a fumble.

Stanford deserves full credit for hitting Oregon St., and hitting them hard, early on, but while the Beavers delivered a good level of effort, they didn't deliver a good quality effort at times. Against a quality opponent, that's not good enough to get the win, and that's much more on the Beavers than due to what the Cardinal did. 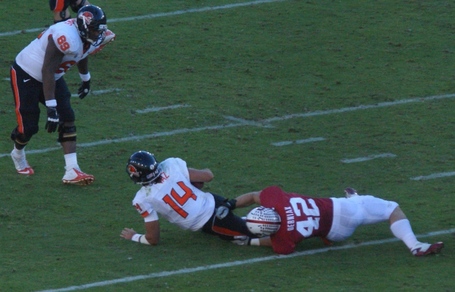 Oregon St. suffered a couple of injuries in addition to Vaz getting twisted down on the next-to last offensive play of the game for the Beavers, above, which will bear watching this week.

Oregon St. dropped to 7-2 for the season, and 5-2 in the Pac-12. The Beavers, who went 3-2 this year on the road, after winning their first 3 trips out of town, didn't get any In-N-Out burgers this time, and return home for a 3 game home-stand to finish the season, beginning with a blackout against California next Saturday night at 7:30 PM.

Stanford improved to 8-2 for the year, and 6-1 in the Pac-12, with the win in their final home game of the year. The Cardinal visit Oregon next Saturday, with first place in the Pac-12 North at stake, and finish the regular season with a trip to UCLA.