Washington didn't out rush Oregon St., at least after the first half, and the Huskies certainly didn't out-pass the Beavers. Oregon St. held a 109-99 rushing advantage, and a lop-sided 318-194 edge in passing yards.

But they did out-play, out-hit, out-tackle, and really out-coach their formerly unbeaten and 7th ranked neighbors. And when you win the turnover battle 4-1, as the Huskies did, you don't need to out-rush or out-pass you opponent to win. And Washington head coach Steve Sarkisian's game plan on both sides of the ball was great.

It's easy to point to the ludicrous targeting penalty that set up Washington's game winning field goal, and something certainly needs done about what was as classic an example of a "lets get out of here in one piece by making sure the home team wins" call by a crew that was on the verge of having the game turn into a third world soccer event earlier in the 4th quarter.

But the Beavers' troubles started much earlier, and they put themselves into a compromised position that allowed the actions and omissions of others to affect their own interests as a result.

Before examining what all went wrong, its important to note the Huskies did nothing wrong, and deserved the win they earned. But simply saying that Washington won won't address the errors that not only shouldn't have happened, there would have been a problem even if Cody Vaz, below, had been able to pull out the win, or even force overtime, once he got into the game. 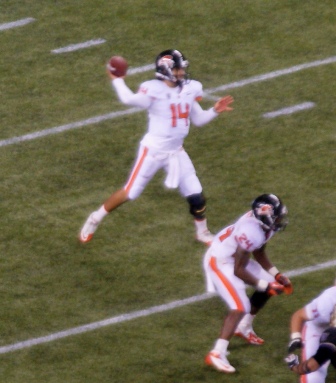 The Beavers problems started right away, when the Huskies came storming out in their black out uniforms in front of a fired up Homecoming crowd of 60,482.

A team and crowd significantly fired up over a classless, not to mention down right incorrect, story by the Oregonian's John Canzano, where he labeled the Huskies the "softest, least resilient team in the Pac-12".

Than Canzano would say something stupid is certainly not news-worthy, but his latest self-serving foray into self-serving insulting yellow journalism designed solely to attract attention to himself did serve to create a greater media firestorm than has ever been directed at Oregon St., and caused the entire Puget Sound area to disdain the Beavers worse than I've ever seen, and I've been around this rivalry since the mid 60's. And it might have gotten someone hurt; not that the consequences of their actions concern the likes of Canzano.

When faced by a grease fire caused by an SOB of a loose canon like Canzano, its necessary to quell said fire aggressively and immediately, lest it rage farther out of control. Instead, Oregon St. coach Mike Riley reverted to a ridiculously conservative first half game plan, which only allowed Washington to become more emboldened. 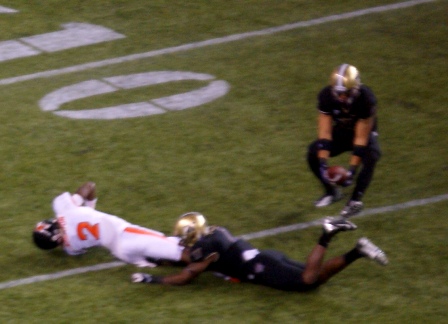 The result was getting Markus Wheaton knocked out on the play where he fumbled the ball after being drilled, above.

Wheaton's loss with concussion-like symptoms was more than just the stats he didn't produce; it was little things. Like another receiver getting totally beaten when trying to throw a block for Brandin Cooks, and the play going for a loss for the lack of a block Wheaton lays down 10 times in 10 opportunities.

With Wheaton out, the consequences of completely mis-managing the end of the first half were magnified. Failing to get even a field goal before the break would figure directly in the outcome of the game. And what earthly point was there in using play action in a situation with well less than a minute left in the half, which Washington's defensive line promptly ignored. (As ANY high school JV d-line would have. How Riley missed the significance of the time remaining in his play-calling in inexplicable.) 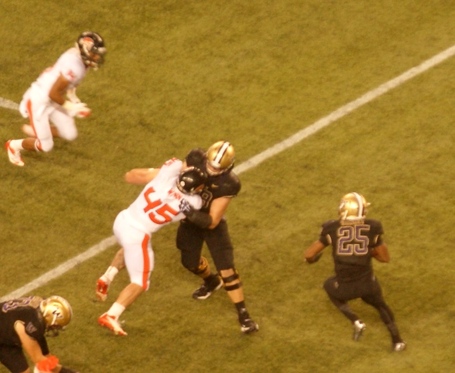 Meanwhile, Bishop Sankey, above, was having a strong start to his night, while the Oregon St. tackling was just terrible at times.

If the Beavers were ineffective in the first half, at least they did come to life in the second half, rallying to make a game of it. 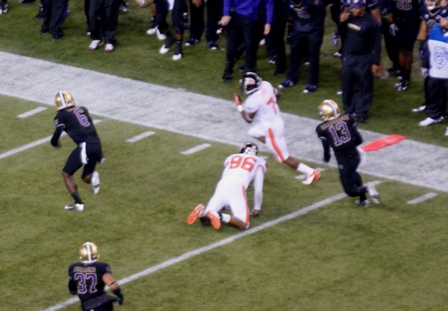 Brandin Cooks, who had 9 catches for 123 yards, including the 54 yard touchdown, above, on a wide receiver screen midway in the 3rd quarter got Oregon St. started on their comback. 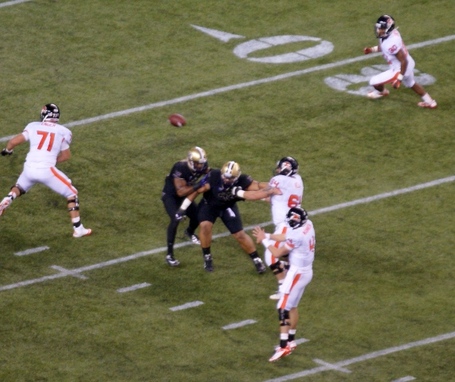 But Sean Mannion, above, who was making his first start after missing the last 2 games with a knee injury, was not sharp, and it was evident early.

The Oregon St. offensive line afforded Mannion abundant time to throw, but the sophomore qb reverted to his freshman tendencies, waiting too long, and then forcing bad throws, some times off balance un-necessarily. The results were 4 interceptions, as many as he threw in his first 4 games this season. 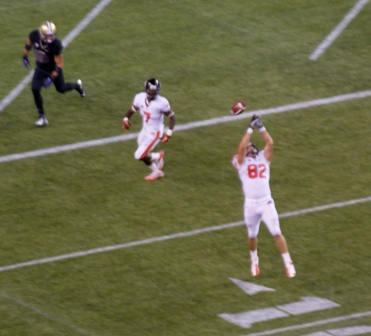 Had Mannion not overthrown a wide open Colby Prince, above, with Cooks in position to block the only Husky in the area, the Beavers wouldn't have had to settle for a field goal What would 4 more points have been worth at the end of the game?

Riley had said he would not have a quick hook with Mannion, but after the third bad throw interception, it should have been enough.

The fact that a blow to the head penalty, one Washington fans were furious over, but was in fact the same penalty that had been assessed earlier, negated a score didn't change the fact that the entire sequence should not have happened.

Mannion missed an opportunity to for an easy completion for an easy first down earlier in the play, and then made a terrible decision to force a ball into underneath coverage. Not unlike the Washington interception for a touchback earlier, which was also thrown into coverage underneath the route. 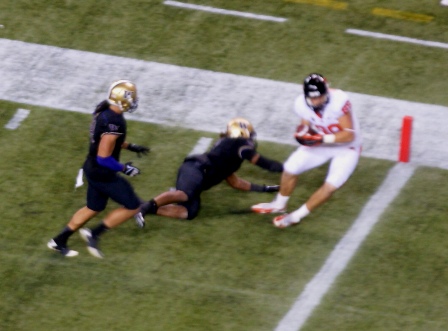 Vaz hooked up with Connor Hamlett, above, for a game tieing touchdown, but only after Mannion threw well behind Richard Mulaney, below, and had Marcus Peters grab that fourth interception. 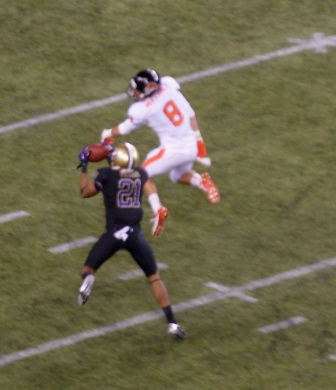 Overall, the results were both disappointing, and also eerily reminiscent of the trip to Washington to play the Huskies 2 years ago. Then as tonight, the Beavers were rolling, yet came into a night game against the Huskies totally unprepared, and played very flat until after digging themselves a large and unnecessary hole to have to climb out of.

And then, as on this soggy Saturday, Oregon St. came to life, rallying back into the game, only to lose it at the end.

The good news is this loss had no impact on the Beavers' (6-1, 4-1) Rose Bowl chances. Win out and they will still have won the Pac-12 North, and earned home field advantage for the Pac-12 Championship Game, thanks to Arizona's assist by beating USC 39-36 this afternoon.

The bad news is that if Oregon St. repeats the self inflicted errors from tonight's performance against Arizona St. next week, or against Stanford or Oregon, the Beavers won't stand a chance in any of those games.

Riley has been brilliant in the first half of this season, but tonight, Oregon St. let the game, what would have been their greatest start in history, and probably their top 10 ranking slip away. And that's mostly on Riley.

In any event, Riley has to ensure that he has his team ready to play from first whistle to last. Especially for road games against Washington!

(Due to SB Nation system technical problems, photos were delayed.)