Because of the recent struggles from the football program, it can be easy to forget the games that made us all fans. So, let's take a moment to look back at some of my favorite games, and maybe yours too! (Note: lists will vary from fan-to-fan). 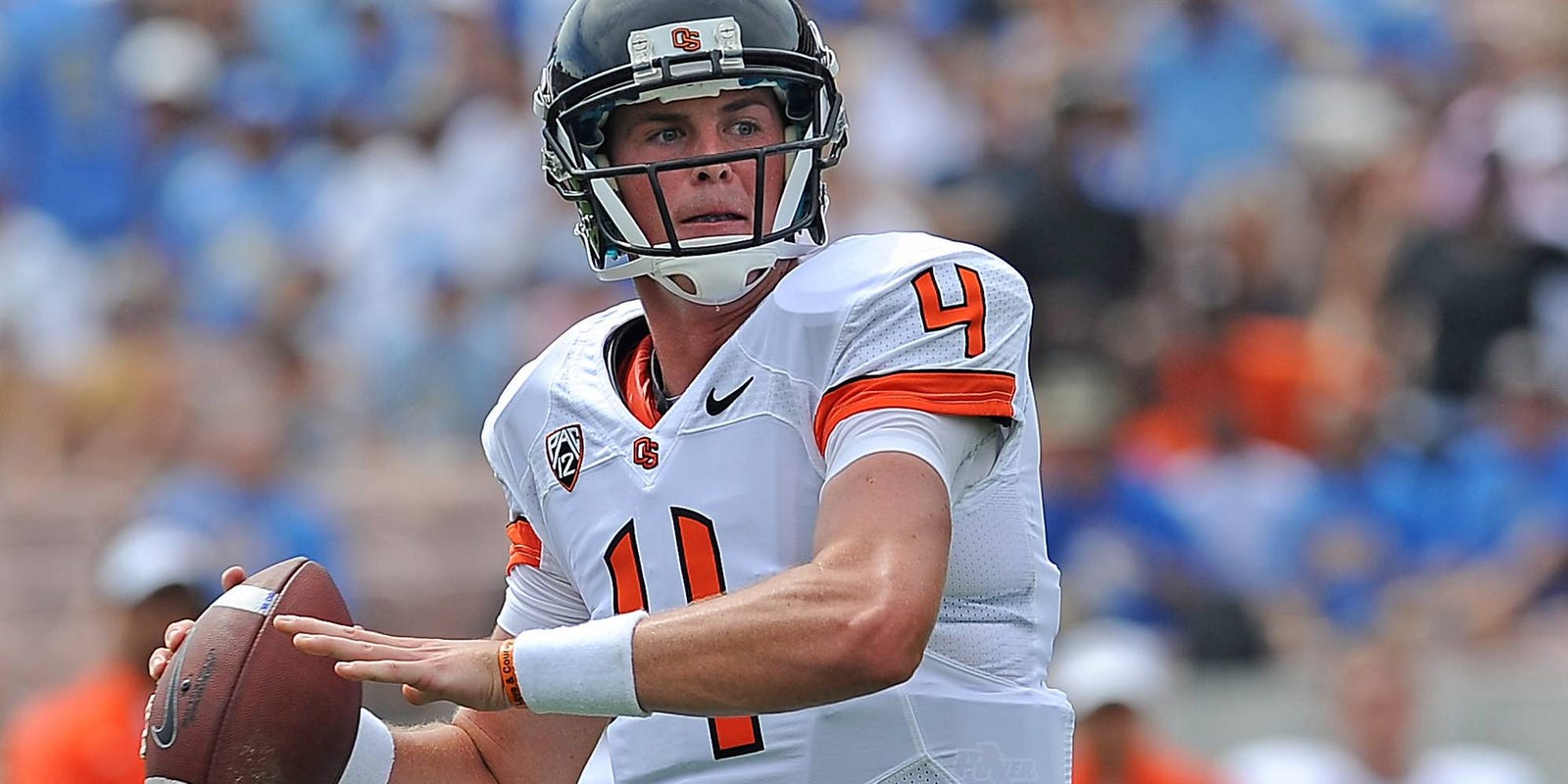 This one was tough one, as 2012 is undoubtably the best season the team has had in the last ten years. I felt like the victory over #13 Wisconsin would be the best, but this game is special for me. First off, I was there. Second off, it showed that this team was really going to be good. Sean Mannion threw for almost 400 yards, and I will never forget that 75-yard touchdown catch-and-run by Brandon Cooks. The Beavs were in control of the game from start to finish, something that we cannot take for granted anymore.

2013 is the last year we went to a bowl game - coincidentally the last year we had Brandon Cooks. I was tempted to put the 20-12 loss against #6 Stanford, as it was a really, really good game, but I could not forget the pick-six. Down by two and looking for a stop, the OSU defense came up huge with a Steven Nelson pick-six to seal the game. The Beavs played from behind all game, but were able to pull it out down the stretch. The best part about this game was listening to it on the radio, and my family going ballistic when we heard the interception.

Speaking of pick-sixes, this has to be the best one we've seen in awhile. It was a blistering cold night in mid-November, probably the best time to catch an Arizona school. Arizona State's blitzing style of defense led to huge plays for the Beavs, including two 60+ yard touchdown runs from Terron Ward and Storm Woods, and a 67-yard touchdown pass to Jordan Villamin. The best was saved for last, as Michael Doctor sealed the game with a cold-blooded pick-six.

I remember seeing #6 Arizona State and #2 Oregon on the schedule and saying "we will beat one of these teams. Not both, not neither, but at least one." I wish I predicted we would win both. Sorry everyone.

Mike Riley doesn't seem too bad anymore, does he? The first effects of his absence were felt in 2015, and it was a dreadful season. The game against Weber State was exciting, when freshman Seth Collins showed off his athleticism with hurdles and shifty runs (he finished that game with a whopping 92(!) passing yards, probably a sign of what was to come). The quarterback shuffle took us from the squirrely Seth Collins, to the troublesome Nick Mitchell, and ended with a respectable Marcus McMaryion. Facing a 31-7 halftime deficit in the Civil War, McMaryion, Ryan Nall, and Victor Bolden rallied the Beavers back to within three points. In the end, Vernon Adams Jr. deflated the Beavers (again) and secured the victory for the Ducks. There is no denying it was an exciting game, even with the loss. It definitely left fans optimistic about the future.

Revenge is sweet, especially when it was eight years in the making. Seeing the 2016 Civil War win in person was amazing, and truly a rare sight. When the rain started pouring down on the fans, you could feel that something was different about this game. The Beavs used a punishing run game and efficient passing to end the Ducks reign on the state. Ryan Nall was an absolute unit that game, tallying four touchdowns and 155 yards rushing.

I was close to picking the 47-44 overtime win vs. Cal. It was a really good game and was the first Pac-12 win in awhile, but you can't say no to a Civil War victory. This also meant that 2016 showed improvement, which meant 2017 would be even better, right?

I try to forget that the 2017 ever happened. What went wrong? In the end, everything. Even the lone 35-32 win over Portland State was embarrassing. The team lost it's spirit early on, but found it in a home game against Stanford. Interim Head Coach Cory Hall brought an edge back to the team, and it led to some smash-mouth, old school football. It was a gritty game, but played excellently by the Beavers. Though Stanfords offense was anemic, the defense stifled them throughout the game. If it weren't for a late Ryan Nall fumble (and an amazing fourth down conversion by a Stanford tight-end), the Beavers would have pulled off the improbable upset. It was the first time Reser was rocking all season, and a win would've steered the team in the right direction. Instead, they weren't competitive for the rest of the year.

The Beavers were blown out in most games they played last season, but Jonathon Smith brought a breath of fresh air to the program. I remember watching this game alone on my laptop, because at this point no one really cared about what the team did. I was there as well, but when their score started to climb in the second half I pulled up the game. Everything was going right for the Beavs. Isaiah Hodgins was making one-handed grabs, Jake Luton couldn't miss, and the defense was actually getting stops. I can still remember my ecstatic cheers when Trevon Bradford caught that late fourth down pass to tie the game, and my deflation when Choukair missed the PAT. Going into overtime, you couldn't help but feel we were going to let it slip away. Instead, the team showed swagger and determination, and punched in the go-ahead touchdown.

It felt like the season was going to change after this game. I was thinking one, maybe two more wins. Obviously it didn't turn out that way, but there is optimism going into 2019.

Do you agree with my list? There are some great games I left out, wins and losses, so let me know what your list would be!