I'm a pretty serious Wikipedian. Although I don't usually write about sports history, every once in a while I get the urge and start delving into the ancient and the arcane at the earlier iterations of OSU — Oregon Agricultural College and Oregon State College.

Here are a couple pieces I've started that might be of some interest to the Aggie faithful... 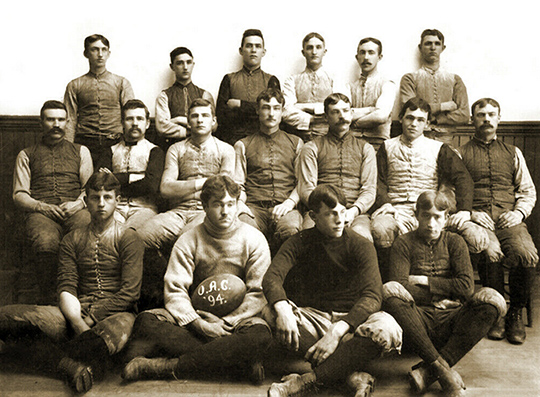 The debut campaign of football in Corvallis, featuring game-by-game recaps of the Aggies' self-proclaimed championship 5-1 season. Includes detail about the first ProtoOSU gridiron star, halfback Brady Burnett, who racked up six (4 point) touchdowns in a 36-22 shellacking of Oregon Normal School at Monmouth.

Coverage of the first year of Corvallis hoops. Basketball wasn't even invented until 1891 and it was initially a women's sport at OAC, starting in 1897-98. (Yeah, I obviously need to work on that project next!) It came to the school as a men's sport for the 1901-02 season, when it was really taking off as a faddishly popular winter sport around the Pacific Northwest. The season was poorly reported in the press and there is more research and work on this article remaining to be done.

There is a massive amount of sports history work remaining to be done on Wikipedia about OSU and its predecessors. If anyone would like to learn more about the site, please feel free to drop me a line at ShoeHutch@gmail.com and I will help you get started. The site's rules and culture can be difficult for a newcomer and I can help you navigate around potential problems and ease you through the learning curve.