The Gary Andersen era is ushered in, and it will be different.

Share All sharing options for: Oregon St. Head Over Heels For Spring Football

Oregon St. staged their spring game today, and one of the largest crowds to witness a Beaver spring game, 12,316, were entertained by a new style of football. There was more running around by quarterbacks in one spring game than in most years during the Mike Riley era, with true freshman Seth Collins doing most of it. Collins also provided the most spectacular plays of the day, getting upended by Dashon Hunt, above, while leading the game's opening drive, and then hurdling a defender while leading another late game drive, below.

After last week's scrimmage, and for much of spring ball, the defense seemed ahead of the offense, but once the Pac-12 channel tv cameras came on, that all changed.

The White team, compromised of mostly the 1st & 2nd team players, opened the game with a 70 yard scoring march in less than 4 1/2 minutes. In addition to the somersault by Collins, a 13 yard run by Chris Brown to start the drive and Browns' 3 yard scoring run were highlights. 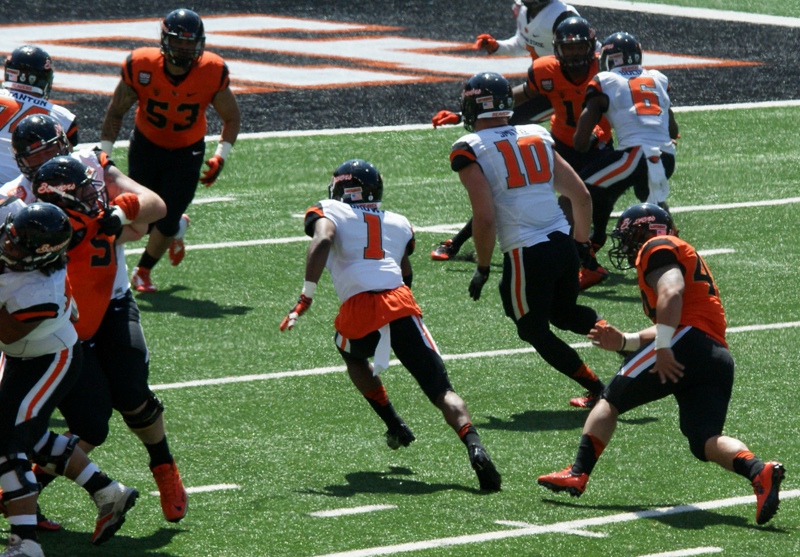 Brown, above, seems to have seized the starting running back job from Storm Woods. Brown wound up with 89 yards and 2 touchdowns on 9 carries, and added a 25 yard catch and run, while Woods had only 4 carries on the afternoon, for 24 yards.

The Orange team immediately answered the opening score, with a 70 yard fly sweep for a touchdown by Xavier Hawkins on their first play. 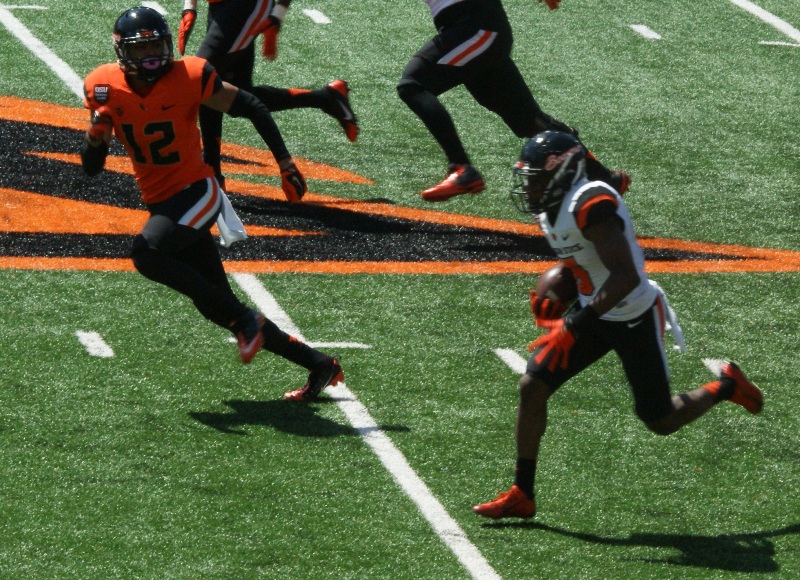 The White team responded with a play that was also a favored one during the Riley era; get the ball to Victor Bolden and let him outrun everyone in the stadium.

A drive finally didn't reach the end zone when the Orange tried a tricky, double pass, with former quarterback Brent VanderVeen the intermediary. 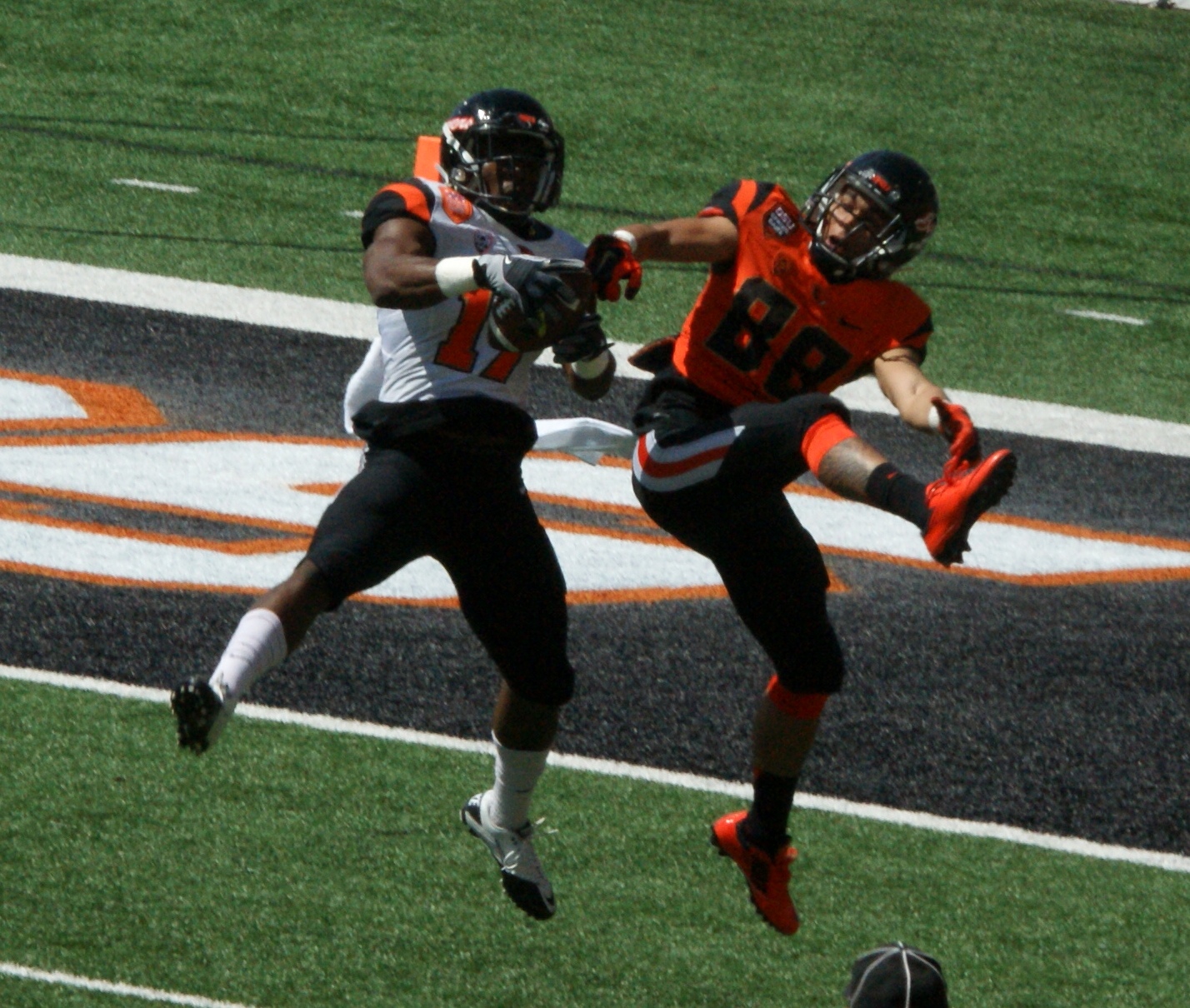 It didn't work out though, as Cyril Noland-Lewis, who had one of the best days of the defenders, beat Rahmel Dockery to the ball.

The White team promptly drove for another score, and added another by the end of the first quarter.

The sudden defensive struggles came as something of a surprise, and notably, at least the first team went away from the new 3 man front, back to a 4 man front, for a while in the second quarter, and it was effective at slowing down the Orange offense. The issue with the defenses appeared to not be so much the d-line's adaption to the 3 man front as it was the linebackers. It appears that lane responsibilities in a 4 LB system is something that still has a large learning curve ahead. It reminded me of poorly deployed kick return defenses, where lane responsibilities aren't well understood. A 4th d-lineman helped prevent the offenses getting to the second level, where the problems were actually occurring.

It's also noteworthy that the stable starting offensive line, which is Sean Harlow at LT, Fred Lauina at LG, Josh Mitchell at center, Gavin Andrews at RG, and Dustin Stanton at RT, was solid. Whatever the issues with the previous scheme, the single most written about aspect of last season was the incessant churn on the o-line, where injuries and other issues caused daily changes. The year before was a lot of the same. Anyone who has been around football at any level has seen offensive lines that can work together for an extended period prove to be better than the sum of its' parts, and that appears to be the case again with the current Oregon St. group.

With the White team getting the upper hand, by not too far into the second quarter, the game really did take on the look of the non-game scrimmages Riley ran, with all manner of personnel groups going against each other. The White team won, either 38-7 (in the stats), or 41-31 (on the scoreboard), depending on whether you count more than 1 of the the uncontested field goals or not.

But there were some things that were informative.

Its apparent that Bolden is not only the centerpiece of the first string receivers' group, he is of the second team, and the third team too. No surprise there. Bolden finished with 99 yards and the 1 touchdown on 5 catches.

Damian Haskins and Dockery ran with the Orange team, and the rest of the White team starters included Malik Gilmore.

That was somewhat of a surprise, and a pleasant one, as Gilmore has struggled with productivity through his career. But though he had only 1 catch, above, for 10 yards, it was in traffic. Coupled with other action we'll get to below, it appears Gilmore may have rounded a corner, as far as his level of comfort with contact goes. 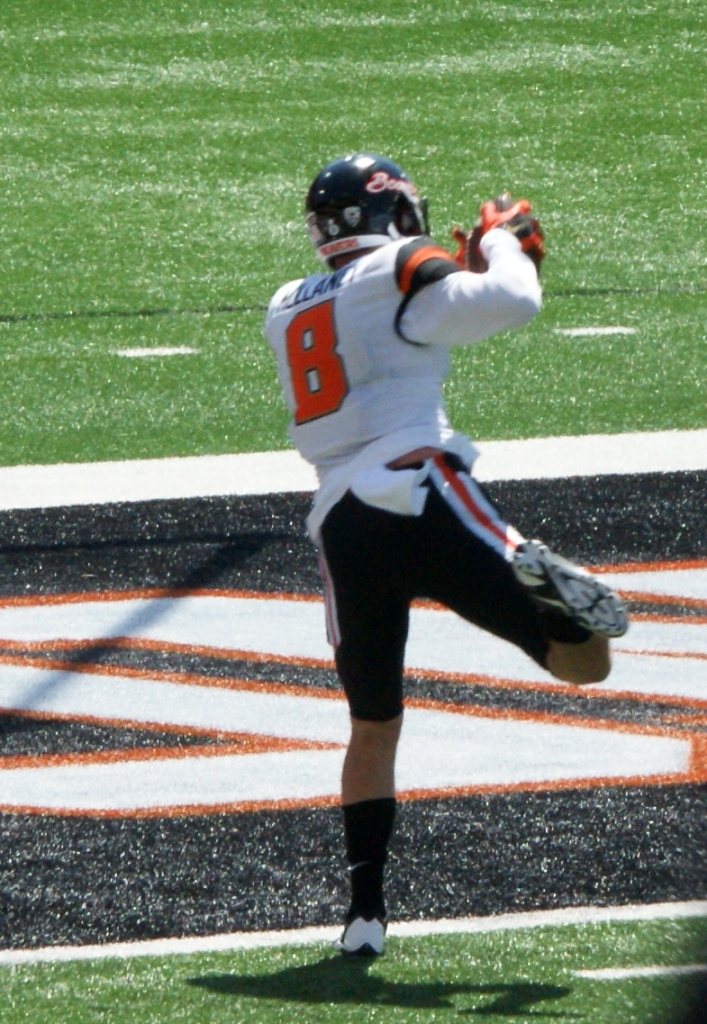 And after a slow start to spring ball, it appears that Richard Mullaney may be back. His only catch of the game was a 20 yard touchdown, above, but he was consistently in the pattern whenever the first stream was on the field.

That leaves Jordan Villamin, who had a strong finish to the season, down the list this spring. Villamin was in with the 1st string when the Beavers were in a 4 wide out scheme, but when they went with 3, with a tight end of H-back in the package, it was usually Villamin who was the one to come off the field.

Part of the issue could be that he is Oregon St.'s biggest down-field target, and the Beavers have no deep passing game. None. Nadda.

Collins is the clear leader in the starting quarterback race, and completed 9 of 15 passes, for 175 yards and 2 touchdowns, and also ran 7 times for another 74 yards. But Collins has no deep ball accuracy.

He should be the starter though, in part because of his often spectacular play making ability, but also in part because Nick Mitchell did nothing to indicate he should supplant Collins.

Mitchell played both as the Orange starter, and as the White second team QB, and completed 6 of 13 passes, for just 59 yards. And he's potentially going to see the field soon enough anyway if Collins continues to risk life and limb.

Marcus McMaryion completed 4 of 7 passes, for 54 yards for the Orange team.

None of the 3 will threaten many secondaries deep, except when Oregon St.'s receivers either elude all coverage, or can catch and run (which is a real possibility).

And no, this is not Andersen's secret weapon at quarterback! (Though should injuries push past the remaining 3, and VanderVeen, who by the way could wind up being a helpful weapon at TE, the above participant in the pregame campus flag football championship is more likely to get the callup than departed Luke Del Rio will be getting called back; accuracy is the single most important trait for a quarterback.)

Defensively, one of the first things I noticed was the amount of added muscle Jashwa James is carrying around. So much so the once under-sized DE was at NG at times today, often with the 1st team White defense.

Lavonte Barnett and Kyle Peko were the ones flanking James. Yes, Peko was at the "3 technique" position in the 3 man line at times. And did well. Peko was also in the middle at times.

The best of the starting linebackers appear to be Darrel Songy and Rommel Mageo, though the division of the team to White and Orange could have scrambled things a bit. Baker Pritchard, playing for the Orange team, had the day's highest tackle total.

The secondary seems set with Larry Scott, who appears to have grown up immensely and CB, and in a bit of a surprise that first appeared at the first Saturday practice, and persisted, Dwayne Williams at the other corner.

Justin Strong is entrenched, as expected at safety, and so is Noland-Lewis, who could be the best player in the Oregon St. secondary. Hunt will be a regular feature, but appears to be this year's nickel.

Also, that #10 you may have noticed at DE was NOT Jalen Grimble, who is on crutches; it was Caleb Smith.

Smith is still also at TE, but was one of the few who could come close to staying with Collins, forcing him to the sidelines, above, rather than having him take off down field.

Smith was one of several offensive regulars who also saw extended action on defense, with Ricky Ortiz seeing a lot of time at linebacker.

And no, your eyes weren't deceiving you, that was Gilmore at safety, and a pair of kickers, Garrett Owens and Ryan Cope at corner. Both made plays too.

That doesn't mean all these players will be showing up regularly in these positions, and their presence was in some cases a product of having to come up with 2 full teams from the roster. But its also a reminder that a lot of these players were the "never come off the field guys" in high school; they can do more than one thing.

College football isn't headed back toward the single platoon days; indeed more players than ever see the field in a given game, between situational packages and the need for rotation players at every position, especially when running an up-tempo system, which Andersen's definitely is, or defending one.

But we are seeing more multi-use of players, and that fits right in with Andersen's stated goal of getting the best football players on the field as much as possible.

It also provides a measure of protection against the entire team getting derailed when health or other issues leaves 1 or 2 position groups thin. Benny the mascot caught a 36 yard touchdown pass that covered 50 yards in the air in the flag football championship prior to the spring game, but we have all seen more than enough of him coming perilously close to being on the depth chart before!

On that note, the Beavers appeared to get through the day with no notable injuries, always a good thing in the spring game.

But far bigger than the takeaways of the changes in scheme or pace or formation was the change in style. If former coach Riley's approach, as well as his pro-style, was closer to an NFL team than the high school programs that represent the level of football on the other side of college football, Andersen's system, from half-time dance contests to being the first one to fire the t-shirt gun to Mullaney doing snow angels to celebrate touchdowns, is much closer to that high school feel.

So is the simplicity of the system. If Riley was all about precision execution, Andersen is about athletes making athletic plays.

Concerns about losing the family atmosphere, be it the fun-loving nature of the team, or the class that Riley's programs had, can be dismissed though. Andersen seems to have won over the players.

And the honoring of the recently lost Giant Killer Bill "Earthquake" Enyart, not only by the players wearing a commemorative patch for the spring game, but by naming Bill's mother, escorted above by Mitchell and Scott, as the honorary team captain, shows Andersen, who never met the "Earthquake", nevertheless understands the culture and history of the program.

Cue the fight song, by the members of the Oregon State University Marching Band, who will be sporting new uniforms this fall in their 125th year (yes, we had a band BEFORE we had a football team) in part because of the funds from today's ticket sales that will help with that project.