Beavers use pitching and defense to make early lead stand up for 2-1 win over Cardinal.

Oregon St. struck early for 2 first inning runs Sunday afternoon, and made them stand up for the 2-1 win that gave them their second consecutive series sweep of Stanford.

Jeff Hendrix, the hero of yesterday's 13 inning 1-0 win that had already ensured Oregon St. if their 8th series win against Stanford in the last 10 years, caused more trouble for the Cardinal with a lead off single, and Michael Conforto singled as well in the opening at bat for the Beavers, setting the table for Kavin Keyes.

Keyes came through with the 2 RBI single that would prove to be all the offense Oregon St. would need. Good thing too, because it was also the extent of the effective offense the Beavers bats would deliver.

It was enough though, given a combination of solid pitching, good defense, and the Cardinal's continuing problem with coming up with clutch hitting, and capitalizing on opportunities.

Most teams if armed with the Stanford arms would be well past 20 wins for the season, even if against the toughest schedule in the country that the Cardinal have had to contend with, but because of their inability to string hits together, Stanford finds themselves 3 games below .500 in the Pac-12, and 4 under overall.

Oregon St. squandered an opportunity to open up some breathing room in the second inning, after putting runners on 2nd and 3rd with 1 out, and eventually loading te bases, all without a hit, as all 3 runners were walked, but was unable to advance anyone.

The mistake of the game was made by Stanford head coach Mark Marquist, when he decided to start freshman Chris Viall, who gave up the first inning Oregon St. hits, and also the first 2 walks in the second inning. After Marquist made the move to bring in John Hochstatter, the Beavers were essentially finished at the plate. Had Marquist simply started Hochstatter, the Cardinal probably would have walked out with a 1-0 win.

Stanford cut the deficit in half in the 3rd inning, when Wayne Taylor, Alex Blandino, and Brett Michael Doran strung together 2 consecutive 2 out singles, but that was the last serious threat the Cardinal was able to come up with.

Oregon St. starter Jace Fry scattered 10 hits across 7 innings, and a lot more balls in play, but didn't issue any walks his defense couldn't defend, and struck out 6 to help limit the damage, and earn his 6th win of the year, against only 1 loss. 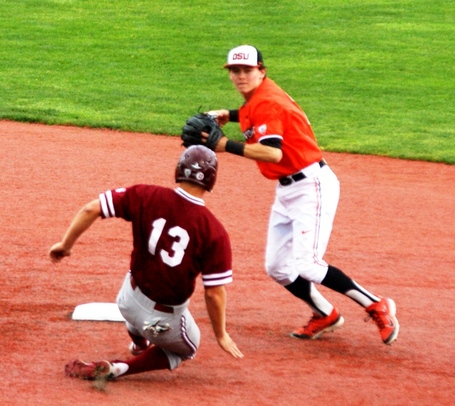 Oregon St.'s Trevor Morrison turning the 5th double play of the weekend by the Beaver defense.

The curious call of the game came in the 5th inning, when Oregon St. Pat Casey, already acknowledging that hits, and therefore bases, against Hochstatter were going to be hard to come by, decided to have Conforto attempt a steal, and get thrown out by less than a mile, but not much less. It was the 4th time in 5 steal attempts this season that Conforto has been thrown out, suggesting it should also be the last time.

The turning point in the game came, and also the only close or controversial call of the contest, came in the top of the 6th inning. Austin Slater singled for Stanford, and Alex Dunlap followed up with another single to left field, but Slater tried to take third base, only to be thrown out by Conforto. 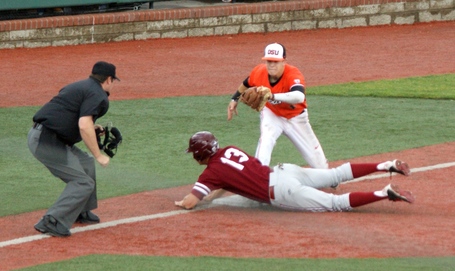 Though close, it appeared Conforto could have gotten an out on the reputation of his arm, as Caleb Hamilton's tag could have come down on top of Dunlap, not in front of him.

Zach Hoffpauir added another single, which wouldn't have scored Slater from second had he held up there, but he would have been on third, in position to tag up and score the tieing run on Austin Barr's subsequent fly ball to center field.

Essentially admitting at least most of the lineup couldn't hit Hochstatter, Casey resorted to small ball in the 7th, but all it took was Conforto to strike out to strand Trever Morrison at 3rd.

Stanford actually out-hit Oregon St., just as they did yesterday, and the Beavers stranded more base runners, 8, than they had hits 6. Half of those stranded were left in scoring position, so it wasn't just the Cardinal who couldn't hit when it mattered the most. 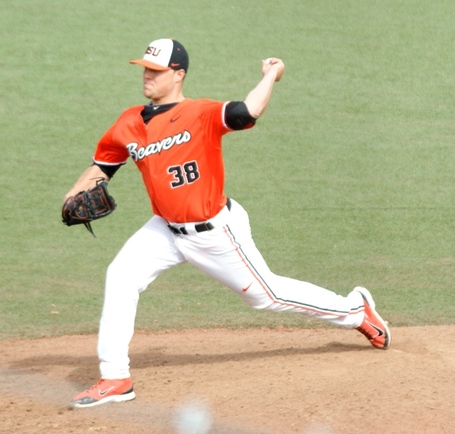 Fry would give way after the 7th, and Zach Reser, above, who has pitched productively in  3 of the last 4 games for the Beavers, turned in a perfect 8th inning on 7 pitches.

Reser turned the ball over to Scott Schultz, below, who worked the last 4 2/3 innings last night to get he extra inning win, but had plenty left in the tank to close out the win, and get his second save of the season. 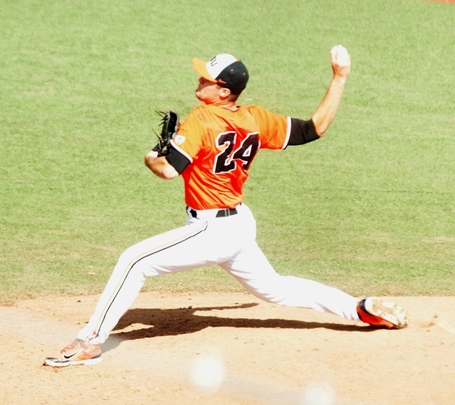 Oregon St. improved to 25-6, and 9-3 in the Pac-12. The Beavers are alone in second place in the conference race, a game behind Washington, after the Huskies got a 3 run walk-off double by Andrew Ely that produced a come from behind 5-4 win over Oregon in the bottom of the 10th inning that won the series, and dropped the Ducks into third place.

The Beavers travel to Pullman next weekend to take on Washington St. (15-13, 6-3). The Cougars sit in 6th place in the Pac-12, after sweeping their weekend series with California.