The whole story of the series sweeping 7-1 Oregon St. win over Oregon came down to pitching. Season ending shoulder surgeries last January to Cole Irwin and this past Tuesday to Matt Krook, who led the Pac-12 in strikeouts when he suffered his injury against Washington left Duck skipper George Horton short armed, whereas Beaver head coach Pat Casey had Jace Fry ready to throw.

Oregon couldn't pull out a win in either of the opening games of the Civil War series despite getting above average outings from Tommy Thorpe and Jeff Gold, as Oregon St.'s Ben Wetzler and Andrew Moore die them one better, putting together 3-1 and 4-2 wins that elevated Casey's win total at Oregon St. to 700.

Down in their rotation, Oregon never had a chance, as Fry gave up 1 hit and 1 run in 8 innings, on his way to improving to 8-1 for the season, as the Oregon St. starters combined for 24 1/3 + innings over the weekend.

Michael Conforto, who reached base in 16 of 23 trips to the plate in Oregon St.'s 5 games this past week, got things started, with a solo home run shot that got up into the wind blowing out over the left field hitting cages on the first pitch he saw from Oregon starter freshman Trent Paddon, as the Beavers took a 1-0 first inning lead.

But it was the second inning that effectively ended things before the crowd of 3,122, which made the weekend attendance 9,550, got wet from the showers that would inevitably come.

And it came from the bottom of the order, not the familiar names. A pair of walks, a bunt by Caleb Hamilton, and an infield roller by Logan Ice scored Michael Howard, and an RBI single by Trevor Morrison made it 3-0.

Paddon hit Andy Peterson to load the bases, then hit Conforto with another pitch for Conforto's 44th RBI of the year.

A ball that missed badly ended Paddon's outing, only his 3rd collegiate start, in the second inning, and though Stephen Nogosek got out of the jam, it started a shuttle of what would eventually be half dozen Oregon pitchers.

Paddon took the loss, dropping to 1-3 for the season.

Fry's fielding error and a walk set up Oregon's 2-3-4 hitters with 2 runners on and no outs, but Austin Grebeck bunted foul with 2 strikes for an out, Tyler Baumgartner struck out on a checked swing, and Fry got Mitchell Tolman to ground out.

The bottom 2/3 of the Beavers order added a 5th run in the bottom of the third inning, using a single, a walk, a fielders' choice, a steal, and a sacrifice fly to manufacture another run out of thin air to make it 5-0 after 3 innings, and set Fry up, even though Oregon St. left the bases loaded again.

"Always scoring runs early helps me out," Fry said. "It just makes me want to fill up the zone."

The Ducks did break up the shutout in the 5th inning, as Fry hit a batter, followed that with a wild pitch, and then saw shortstop Morrison make a rare throwing error, one that the injured first baseman Kavin Keyes probably would have handled, but Billy King, making only his second start of the season, couldn't.

Not coincidentally, Jerad Clark hit for King to lead off the bottom of the 5th.

Oregon's last chance to get back into the game came in the 6th, when a high throw on a possible double play ball and a questionable balk call put Nick Catalano on 2nd with 1 out, but back to back strikeouts by Fry, which tied his season high of 10 against Northern Illinois, ended the threat.

Fry would add an 11th strikeout to set a new career high.

Oregon St. added a pair of insurance runs in the bottom of the 6th., again answering an Oregon uprising with a stronger effort of their own.

Jeff Hendrix's 1 out triple was followed by Peterson's RBI single up the middle, and a wet ball wild throw on a pickoff play in what was at the time a heavy shower put Peterson into scoring position.

Even when Conforto didn't reach, he contributed, with a ground out that moved Peterson to 3rd., and after an intentional walk to Dylan Davis, Aaron Payne's diving stop was too late to get Howard, who got the RBI when Peterson scored to make it 7-1.

It could have been even more lopsided, but Casper missed a 3 run home run that went foul, into the fir trees down the left field line, and though he walked, the Beavers would leave the based loaded for a 3rd time in their first 6 at bats. A few timely hits and it could easily have been a 14-1 game instead.

Fry threw 120 pitches through 8 innings, so Brandon Jackson closed out the win that elevated Oregon St. to 31-8 for the season, and 14-4 in the Pac-12, keeping pace with Washington, who downed Washington St. 2-1 in the second game of the Apple Cup in Seattle at the same time. 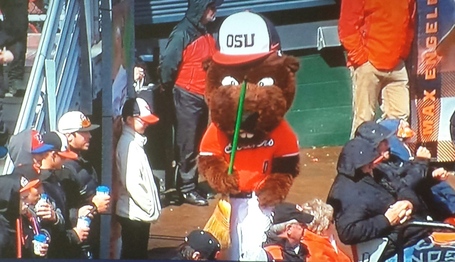 (Photo by Sahr, via ESPNU)

It was the 3rd consecutive sweep of Oregon by Oregon St. in Pac-12 series played at Goss Stadium, and the Beavers' 5th conference series win over the Duicks in the 6 seasons since Oregon resumed their baseball program.

The Huskies can take a 1/2 game lead if they can win the second game of their double header with the Cougars later this afternoon, but the Beavers will sit atop the Pac-12 by a half game if Washington St. can pull off the series winning upset.

Oregon dropped to 31-13, and 10-8 in the conference, slipping into 5th place, behind both Arizona St., who faces Arizona in the final game of the Territorial Cup this afternoon, and USC, after the Trojans completed a sweep of UCLA yesterday.