Two linemen are the newest to join the countdown.

Share All sharing options for: Beaver Football: Top 25 Countdown - 10 and 9

Dylan Wynn has been a starting defensive end for the Beavers since his freshman year, and has been a good to great player for Oregon State since he got on the field. His stat line does not portray his importance to this team however, the best Beaver defenses have always had two pass rushers, Victor Butler and Slade Norris were a prime example of that when they were playing in Corvallis. Wynn does not possess the ridiculous power and quickness that Scott Crichton does, but he is a high motor guy that is relentless in his pursuit. 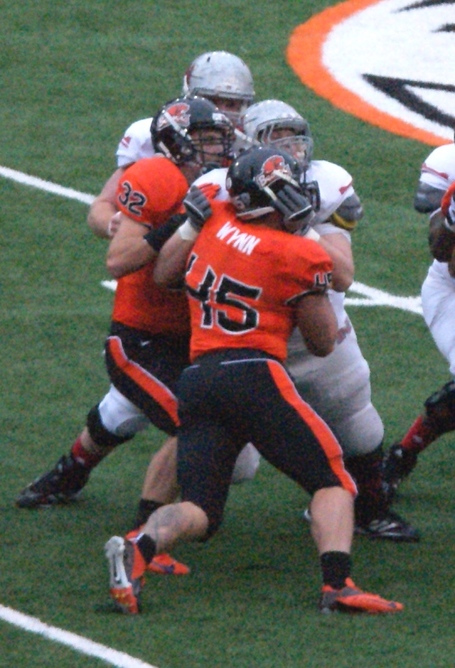 There are two types of plays that define Wynn as a player. The first type is an example of his tremendous work rate, where whenever he is in kick coverage he is one of the first players down the field, More notably I recall one instance where he charged the wedge, blew it up, and then was involved in the tackle afterwards. If you ever watch him in practices also he will always chase after any ballcarrier that escapes. It may be a waste of energy but it is a testament to how hard he works. His biggest play of the last season was when got his single forced fumble against Wisconsin once they had made their way to the red zone and were threatening. It is most likely the biggest play of Wynn's career, as it helped the Beavs pull out a close win over a difficult opponent and start off the season with a bang.

Wynn has been a very good player for the Beavs so far, and still has the upside to be a much better player. He disappeared for large chunks of last year. However, he does have added value as he stays on the field for nickel and dime packages. He is one of OSU's best players and needs to have an even larger impact, and just as importantly, a consistent impact.

Michael Philipp is the starting left tackle and has been the starting blind side blocker on and off with injuries. Philipp came on as a starter in his true freshman year and helped contribute to the first terrific season of Jacquizz Rodgers. Philipp is a massive man at 6' 4" and 325 lbs, but he still has the requisite athleticism required to play left tackle. 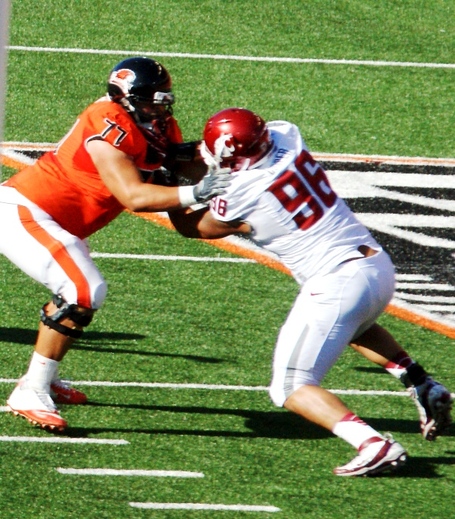 One of the most telling ways to gauge Philipp is the performance of the offensive line when he was hurt. As a starter in 2008 and 2009 the offensive line was solid and helped produce 9-4 and 8-5 seasons respectively. When he was injured and redshirting the Beavs went 5-7 and 3-9. With his healthy return in 2012 the Beavers turned it around it again and ended up with a 9-4 season. Obviously he was not the only piece to help improve the whole team, Isaac Seumalo had a large impact on the offensive line as well, but OSU missed Philipp when he was out. When OSU won in those losing seasons they generally won the battle in the lines, and with Philipp out they really struggled in the trenches.

Philipp is a force, but still retains his quickness as well. He has performed exceedingly well for the Beavs whenever healthy and has been one of the best players for the Beavs. He is an integral part of the offensive line, and would be exceedingly hard to replace, with the backups behind him having little to no experience.